Senator Tom Harkin (D-IA) and his Senate Health, Education, Labor and Pensions (HELP) Committee staff released Sunday a report based on a comprehensive investigation of  30 of the biggest for-profit college companies. It’s full of stark revelations about this controversial, troubled industry.

I’ve been saying for a couple of years that, no matter how cynical one’s view of Washington is, it cannot encompass the perpetuation of the terrible impunity of America’s for-profit colleges. For over a decade, these corporations have taken billions from taxpayers — now about $33 billion a year — for a toxic mix of high-priced, low-quality programs that leave many students — veterans, students of color, low-income students, immigrants, and others — deep in debt, their hopes crushed, their lives ruined.

For-profit colleges now account for about 10 percent of U.S. students but 25 percent for federal financial aid and nearly half of all student loan defaults. Many schools get 85-90 percent or more of their revenues from federal taxpayers, and they spend most of it on items like marketing, recruiting, and big executive salaries, rather than education and job placement. Not all for-profit colleges are that bad, but many, including most of the big ones, are.

There is stalemate in Washington on holding this industry accountable, because the big money that it spends on lobbying, lawyering, and campaign contributions has bought the allegiance of many congressional Republicans and  Democrats and has thwarted federal regulations. Thus determined reform efforts by the Obama Administration, and principled leaders like Senators Harkin, Dick Durbin(D-IL), and Kay Hagan (D-NC), and Representatives Elijah Cummings (D-MD), Maxine Waters (D-CA), and Keith Ellison (D-MN), have largely been blocked.

But after an extended period of scrutiny by federal officials, nonprofits, and diligent news reporters, the truth is coming out and having an impact. Federal investigators are probing for-profit institutions including giants the University of Phoenix and EDMC and smaller operations like Florida’s FastTrain College, where, on the day of an FBI raid, one student told a reporter that she had been charged for room and board — at a school that does not offer student housing.

More than 30 state attorneys general are accelerating a joint investigation of fraud by for-profits including Corinthian, Kaplan, and Bridgepoint. Long lethargic accrediting bodies are at last reconsidering the free pass they have given these schools. Investors are realizing that the reckless joy ride may be over soon. Most importantly, students are getting the message that they need to look elsewhere for educational opportunities. Veterans are especially incensed, and more and more of them are speaking up about the deceptive and coercive recruiting tactics many for-profits use to exploit lucrative GI bill dollars. Check out the hard-hitting video from the Iraq Afghanistan Veterans of America, above.

The latest blow is the detailed report by Harkin. Among its conclusions: 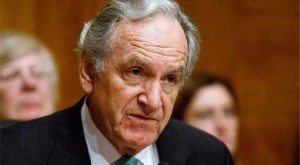 For his leadership on his issue, Senator Harkin has allegedly faced threats from this arrogant industry and unremitting hostility from Republican members of his own committee. He deserves enormous credit for his determination to protect students and taxpayers.

The for-profit colleges have adopted a talking point — see here and here — asserting that those who question their industry are driven by “their political or ideological agenda.”  But the agenda that Harkin and his allies are pursuing is purely common sense: Taxpayer money should not fuel waste, fraud, and abuse.  There can be a constructive role for for-profit institutions in educating Americans, but the current race to bottom — where profits depend on abusing and exploiting students — must end. With federal dollars already scarce, policy must instead reward schools that compete by helping students train for careers and obtain good jobs. This straightforward approach could be considered contentious only in a warped world where slick industry lobbyists and campaign money distort the debate.

We’ll have more on the Harkin report in the days to come.  The Senator, joined by Rep. Cummings, will hold a press conference Monday afternoon.

UPDATE: Rep. Cummings, who is the top Democrat on the House Oversight and Government Reform committee, issued his own report on Friday after seeking information from 13 of the largest publicly traded for-profit college corporations about how they determine executive compensation. The report concludes that these companies calculate executive pay “predominantly on the profitability of their companies rather than the success of their students.”

Meanwhile, the for-profit college’s lobbying organization, APSCU, attacked the Harkin report, taking issue with a few factual assertions and employing the same talking points I described above: “Unfortunately, Senator Harkin’s report continues in the tradition of ideology overriding reality. The report twists the facts to fit a narrative, proving that this is nothing more than continued political attacks on private sector colleges and universities.”

UPDATE: Read more on Republic Report about the Harkin and Cummings reports and press conference:

For-Profit College Recruiter: Goal Was To “Demoralize Potential Applicants” And Get “Asses In Classes” July 31, 2012