posted at 4:54 pm by David Halperin 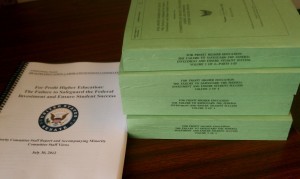 At a Capitol Hill press conference today, Senator Tom Harkin (D-IA) released a blockbuster four-volume report based on his two-year investigation of the for-profit college industry.

I’ve already discussed the findings of the report, which details how many of the big for-profit schools engage in fraudulent conduct, offer high-priced, low-quality programs, and leave many students deep in debt.

Harkin today said “the bottom line” is that the $32 billion that taxpayers provide each year to the for-profit college industry is “squandered.” Representative Elijah Cummings (D-MD) also stressed that enormous $32 billion figure (one quarter of all federal financial aid, and actually more like $33-34 billion when you add in additional benefits for U.S. troops and veterans) and said that when it comes to students attending these schools, “dreams are being destroyed.” Amy Wilkins of the non-profit Education Trust called the practices of this industry “horrendous.”  Senator Richard Blumenthal (D-CT) said that what is needed to deal with the abuses is “sweeping reform that is incorporated into law…. The time for legislation is now.” 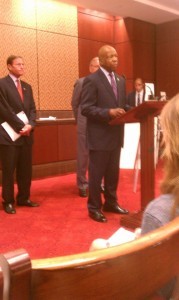 The members of Congress who spoke, looking to throw the industry a bone, mentioned three for-profit college companies that they saw as taking steps to improve: DeVry, the University of Phoenix, and the Washington Post’s Kaplan.  They didn’t say these schools were good, just seeking to improve. That’s fortunate. Kaplan is under investigation by at least four state Attorneys General; 68 percent of its college students drop out before graduating. The University of Phoenix is under investigation by at least three state Attorneys General and the U.S. Department of Education.

And all three companies hire expensive lobbyists, lawyers, and communications consultants to block the kind of reforms sought by Harkin and the Obama Administration, reforms that would hold this industry accountable and channel federal aid to programs that actually help students. Through such pressure and generous campaign contributions, the for-profit college industry has bought the allegiance of enough members of Congress to keep the federal aid pouring into its coffers.

What adds insult to injury is that, because many for-profits get 85-90 percent or more of their revenues from tax dollars, we are actually paying them not only to injure students but also to block reforms in Washington. In short, we’ve created a monster. But with revelations and hard data from the Harkin report and elsewhere, this industry will soon have to reform or shut down.