Exclusive: The Blueprint Of The For-Profit College Newspeak Campaign 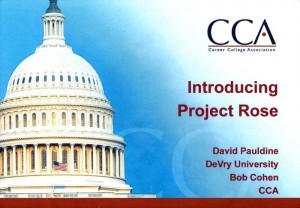 Shakespeare’s Juliet told her Romeo, “What’s in a name? That which we call a rose by any other name would smell as sweet.”  The star-crossed lovers could not have known that centuries later those words would be invoked by one of America’s most controversial industries in a manner more worthy of Orwell’s 1984. A 32-page Powerpoint document, “Introducing Project Rose,” from the leading trade association representing for-profit colleges, instructs its members to alter “the vernacular of our sector” in order to reframe the public debate. In this Orwellian Newspeak, a for-profit school’s high-pressure “call center” is transformed into an “enrollment-assistance center,” a “recruiter” becomes a more sympathetic “counselor,” a “piece of business” becomes a student “applicant,” and vilified “private equity” is called simply “private sector.”

In the past few years, for-profit colleges have created strong public concern because they have often have high prices, low-quality programs, and deceptive tactics that have exploited taxpayers and left students deep in debt.

The industry has been particularly criticized for coercive sales techniques that have appeared, despite industry denials, to be driven by sales quotas and commissions.  The Project Rose document, from the group then called the Career College Association and now called APSCU, tells industry members that the new name for  “quotas” is “goals” and the new name for “commissions” is “salary component.”

Today the Chronicle of Higher Education published an account (subscription required) of the 2010 Project Rose Powerpoint and reported that APSCU pursued the effort for at least a year.  Republic Report also has obtained the Powerpoint, and, exclusively, you can download the Powerpoint here and watch it here or below.

Clearly the effort was aimed at describing students less as traded commodities and more as treasured scholars. It’s unfortunate that the for-profit education industry has not tried to match its new words with improved deeds.

Project Rose was on the agenda when senior for-profit executives held a luxury retreat in Telluride Colorado in 2010.  Amid photos of skiing and premium accommodations, the meeting brochure described a session called, “Introducing Project Rose,” with the description “Shakespeare had it right. Words matter.”

A section of the Powerpoint entitled “How We Think,” includes this insight: “Institutional Lending Anticipates Heavy Failure To Repay.” This appears to be an admission by the trade association that expensive student loans issued directly by for-profit schools are often made with awareness that students will end up with too much debt to be able to pay the loans back.  Another sentence acknowledges how for-profits have benefitted from the recession: “Unemployment Rates Drive Profits.”

Last week, Republic Report’s Zaid Jilani reported exclusively from APSCU’s annual Washington DC meeting on former Senator Trent Lott’s account of how, as an APSCU lobbyist, he is able to bring into the fold Senators worried about how this industry is harming U.S. students, including our veterans. APSCU and Lott continue to face lobbying challenges.  Last week Senator Jim Webb (D-VA), sponsor of the post 9-11 GI bill, introduced new legislation to protect veterans from abuses by the for-profit college industry.

Here are some examples of APSCU’s Newspeak aimed at redefining the subprime college industry:

Brian Moran, APSCU’s executive vice president, told the Chronicle that with a new APSCU president in place and the association’s focus on compliance with new federal regulations, other priorities have “superceded the issue of Project Rose.”