Corporations often seek to elect their own politicians and set policy, but are nervous about public backlash from engaging directly in politics. That’s why so many corporations hide behind layers of front groups and dummy nonprofits to run ads and other electioneering efforts. Aetna, the health insurance company, was recently exposed for secretly financing at least $7 million in pro-GOP attack ads in 2010 using undisclosed front groups like the American Action Network.

Another mysterious group, called the “Coalition for American Jobs,” is a front apparently designed to conceal corporate cash flowing into Congress.

The group has aired a number of television commercials, including promotional ads for lawmakers running for reelection. In December, the group aired the following ad to encourage Bay State residents to support Senator Scott Brown (R-MA):


The narrator intones “Here in Massachusetts, we have a long history of thinking independently and Senator Scott Brown is an independent voice in Washington! […] Scott Brown, keeping America competitive, creating good jobs.” The ad ends with an appeal for viewers to call Brown and thank him for fighting for jobs and a “better future for our families.”

Its clear that the commercial is designed to boost Brown, who faces one of the most competitive reelection races in the country this year. What’s less clear is who exactly is paying for this ad. From watching the spot, there’s little information about its sponsorship.

Tax returns from the group show that it is incorporated as a 501(c)6 trade association, meaning it derives its funding from other corporations. Which industries does Coalition for American Jobs represent? Other trade associations.

The group is led by Marty Durbin, an executive vice president at the American Petroleum Institute, a trade and lobby group for Chevron, ExxonMobil, Shell Oil, and other oil giants. Durbin is the nephew of Senator Dick Durbin (D-IL). His group contributed $1,000,000 to the Coalition for American Jobs in 2010:

The Coalition for American Jobs is registered to the same address — 700 2nd Street NE — as the American Chemistry Council, which is funded by DuPont, Dow Chemical, and other major chemical companies. 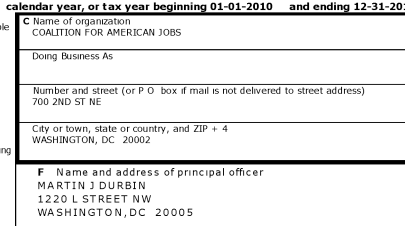 To recap, multinational oil and chemical companies fund their respective trade associations, which then funnel money through another trade association which in turn sponsors these pro-Scott Brown ads. It may seem like a circuitous way of doing business, but this is the way our elections are now run. When Massachusetts voters see this ad, it’s unlikely they will realize that it is financed by ExxonMobil and Dow Chemical.