Exclusive: Corporate Front That Funnels Cash For Attack Ads Lists A Corporation As A Board Member 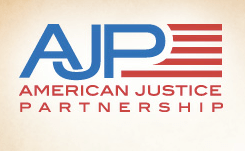 Republic Report will run a series of stories this summer on shadowy front groups seeking to influence elections with big money. Earlier, we revealed that a mysterious group called “New Models U.S.A.” received major funding from a lobbying association for CEO’s, while funneling undisclosed cash into ballot initiatives in Ohio, supporting Republican Super PACs active in both the Republican presidential primary and a high-profile congressional race in 2010, and even providing support to a polling service for the House Republican caucus. We also helped discover $55 million in undisclosed cash, organized by a set of American oil barons using a nonprofit called the “Center to Protect Patients’ Rights,” which was used to secretly help elect congressional Republicans in 2010.

Today, we’re reporting on another mysterious front, the American Justice Partnership (AJP). This group is tied to efforts to suppress voting in Maine, to limit the ability of citizens throughout the South to sue insurance companies and other big businesses, and to run hysterical anti-Muslim ads to help defeat Democrats in 2010. The group, however, has fiercely guarded the names of its donors. AJP even broke a Maine law for refusing to disclose its donors 45 days after an election in which AJP provided 100% of the money used to attempt to repeal a law allowing same-day voter registration. How far has the group gone to skirt campaign finance laws and avoid detection by the public and press?

According to its own public filing, one of the board members of American Justice Partnership is literally a corporation.

American Justice Partnership was founded with help from the National Association of Manufacturers, a business trade group, to help spearhead efforts to enact “tort reform” laws across the country, including running high dollar campaign expenditures to defeat state judges. John Engler, a former Michigan governor, then the lead lobbyist for the National Association of Manufacturers, served on the board of AJP in 2008 along with Dan Pero, a former Engler aide. Pero is still associated with AJP, while Engler now serves as president of the Business Roundtable, another lobbying group.

Reviewing records for the group, Republic Report noticed something unusual about AJP’s board membership. Pero Consulting Inc, a domestic for-profit corporation registered in the state of Michigan, is listed as an “individual trustee or director” of the board of AJP for both 2009 and 2010. View a screen shot below: 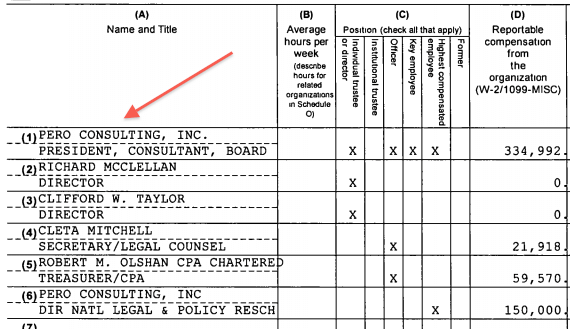 We e-mailed Trevor Potter, the campaign finance expert retained by Comedy Central’s Stephen Colbert and his Super PAC, to ask about this usual arrangement. He told us, citing D.C. Code s 29-406.02, that D.C. law requires a director of a corporation to be an “individual.” The American Justice Partnership is registered in D.C.

We informed Cleta Mitchell, a Republican attorney who serves as legal counsel to the American Justice Partnership, of the inclusion of an actual corporate entity as a board member to her group. She told Republic Report that the board membership of Pero Consulting Inc. is a “mistake.” Asked if her group will contact the IRS to amend its reports, Mitchell told us that “I will have to talk to the CPA who prepared the Form 990’s.”

It’s possible AJP simply made a typo two years in a row, listing Pero Consulting Inc. as its president and board member, rather than Dan Pero, who helps lead the group while also owning Pero Consulting. If so, then AJP has misinformed the public and the IRS. If, in fact, the Pero Consulting corporation serves on the AJP board, AJP appears to be violating the DC corporations law.

State Representative Diane Russell (D-Portland), a proponent of same-day voter registration who called out AJP’s efforts to repeal the law in Maine, told Republic Report that she isn’t surprised that AJP could be breaking the law by including a corporation as a board member. “In Maine, AJP broke our election laws while spending money on out of state TV ads to tell Maine voters that out of state interests were spending money to undermine our election laws,” she told us. “The word ‘irony’ doesn’t quite cut it.”

The disclosures reviewed by Republic Report also provide a window into how corporate money can move from one group to the next, and how the financiers of ugly campaign commercials in an election cycle are carefully guarded. In 2009, the group provided over $2.4 million to the American Future Fund, another secretive front. That year, the American Future Fund blanketed competitive House races with ads. One AFF campaign commercial hit Democrats for supporting a New York mosque at Ground Zero, allegedly built to honor the terrorists’ victory on 9/11. In reality, the ads misquoted the lawmakers, and the mosque in question was a planned community center headed by a cleric who has worked for the government, including the Bush administration, for years to promote peace. 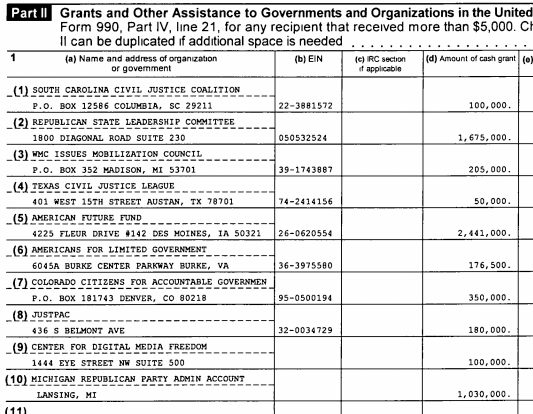 It appears, since 2008, the American Justice Partnership has moved beyond tort reform and has become involved in far more partisan efforts. In 2009, AJP provided $50,000 to Jim Bopp’s law firm for “litigation expenses.” At the time, Bopp was heavily involved with moving the Citizens United case forward.

Where does the American Justice Partnership receive its money? Calls to Dan Pero and others involved with the group have gone unanswered. Republic Report dug into disclosures from a lobbying association in Wisconsin that represents manufacturers and construction interests, and found a $250,000 grant to AJP in 2010. Why did these Wisconsin businesses give money? It’s possible it was in connection to the ads AJP ran in support of Scott Walker’s campaign for governor, but the Wisconsin lobbying association refused to provide us any details.

When Mitt Romney famously said, “Corporations are people, my friend,” maybe he was referring to the corporation that occupied a chair at the board meeting of the American Justice Partnership.