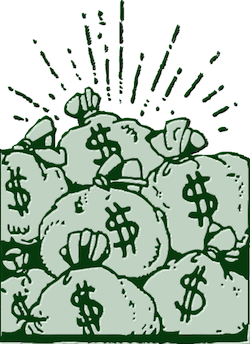 In today’s edition, we’d like to call your attention to a secretive nonprofit, “New Models U.S.A.” The media has linked the group to a number of shady electioneering efforts in the past. Republic Report has uncovered new information about the group, its funders, and a strange arrangement that appears to be set up so that Speaker John Boehner (R-OH) has his own private polling operation.

In this day and age, not only can corporations spend unlimited amounts on elections, they can fully hide their identities using nonprofit groups that can operate as Super PACs or quasi-lobbying firms. New Models U.S.A., a 501(c) nonprofit registered in Virginia, is one such group. New Models appears to exist for the express purpose of hiding political money.

Here’s a brief history of the group:

— Race-Baiting Robocalls: In 2008, the Cleveland Plain Dealer reported that New Models “was behind controversial automated calls to Pennsylvania voters made during the 2008 presidential election. The calls told voters that Barack Obama’s aunt was living in America illegally and that he accepted campaign contributions from his ‘illegal alien aunt.’” The source of the robocalls were never revealed.

— Sarah Palin Connection: In 2009, the president of New Models, Timothy Crawford, was forced out of his position job as a finance director at the Republican National Committee. Shortly before exiting the RNC, Crawford was named treasurer of Sarah Palin’s political action committee, SarahPAC.

— Laundering Corporate Cash In Ohio: In 2010, a group called “LetOhioVote” formed to oppose then-Democratic Gov. Ted Strickland’s plan to legalize 17,500 slot machines at the state’s seven racetracks to help generate new revenue for Ohio. The group was funded exclusively with $1.5 million from New Models U.S.A. The Ohio Secretary of State sued New Models to reveal the source of its funding, citing Ohio’s longstanding laws against corporate cash in state politics. However, a state court tossed out the case on a technicality. The source of the finances for New Models or LetOhioVote were never revealed.

— Concealing Money To Take Out Congressman John Spratt (D-SC): In 2010, a Super PAC called Citizens for a Working America formed with only one donor: a $255,000 donation from New Models. The Super PAC went on to use that money to run attack ads against Congressman John Spratt (D-SC), who lost his seat that year. Neither Citizens for a Working America or New Models revealed their donors when releasing the ads.

If New Models U.S.A. seems weird, this timeline is only the beginning. When the Virginia-based nonprofit isn’t busy funneling cash to partisan efforts, it appears to be part of the establishment Republican machinery.

Republic Report has uncovered a monthly polling distribution website hosted by the group that is partnered with the Winston Group, a firm managed by David Winston, Speaker John Boehner’s personal pollster. The polling memos, which use dial testing to gauge the interests of randomly selected independents, Democratic voters, and Republican voters, highlight hot topics of every month. This month, the group polled voter perspectives on the so-called “war on women;” last year New Models and the Winston Group surveyed voters on the contentious debt limit negotiations. The polling memos provide a candid take on voter perceptions of the House GOP agenda. Here’s a quote from a recent memo that studied the Paul Ryan budget:

In the context of debating the Ryan budget, when Democrats attack the GOP for cutting Pell grants and not ending subsidies for oil companies, that works better than attacking the GOP for premium support. College-educated people know what Pell grants are. They hate oil companies. Even after watching a 20 minute dial test where an actress reading key parts of Paul Ryan’s recent A E I speech were contrasted against another actress reading the most vitriolic responses from Democrats over the past two weeks, respondents had little idea what premium support was about.

And here’s a video of the dial test with prospective voters:

The surveys appear almost as a permanent campaign, designed to test attitudes in crucial election areas.

So where does all this money for New Models U.S.A. come from? It’s not clear, and as the Ohio Secretary of State lawsuit makes clear, the group is willing to sue to protect the identity of its donors. But Republic Report has discovered that a lobbying group has funneled at least $1,257,000 to New Models over the last four years. According to tax disclosures, a lobbying association called the Business Roundtable, has provided contracts for “professional services” to New Models since 2008.

The New Models polling updates, however, do not necessarily always relate to business interests. The singular unifying theme, however, appears to be the top issues for the House Republican caucus. New Models may simply serve as a conduit for big corporations, like J.P. Morgan, to quietly finance political services for politicians like Boehner. Or, it’s possible that some of the money moved through New Models from the Business Roundtable ended up in secret attack ads, like the shadowy Super PAC called Citizens for a Working America. In the age of opaque democracy, we simply don’t know.