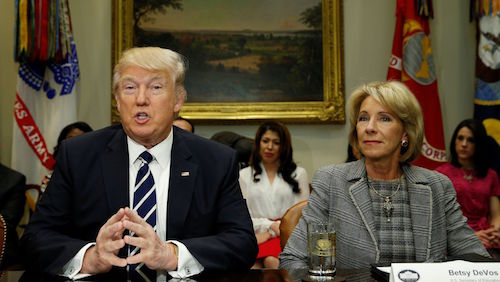 Donald Trump just vetoed the bipartisan student debt relief bill. Trump chose to stand with Betsy DeVos and the wealthy owners of predatory for-profit colleges, operations similar to his own fraudulent Trump University, and to stand against defrauded students, i.e. all the people that, as a candidate, he promised to help: veterans, “forgotten” working people, his “inner cities.”

It was the first time in his presidency that Trump vetoed a bill concerning domestic policy.

Of course, Trump chose to veto the bill late on a Friday, home for all the awful things his administration hopes no one will notice.  But people will notice.

In March, in a stunning bipartisan rebuke of DeVos, the Senate voted 53-42 to overturn a new Department of Education rule that would make it nearly impossible for students ripped off by their colleges to have their federal student loans cancelled.

The House passed the same measure in January, 231-to-180, with all Democrats and six Republicans voting yes. The resolution invoked the Congressional Review Act, which allows Congress to void a new agency rule via a resolution passed by a majority of both houses and signed by the president.

House Majority Leader Steny Hoyer (D-MD) previously confirmed that Democrats planned to vote to override the veto if it happened.  But, given the previous votes, it appears unlikely the measure would muster the needed two-thirds majority of each house of Congress.

So, once again, the Trump administration has seen to it that scam colleges get their way, and students and veterans suffer.

Senator Dick Durbin (D-IL), who introduced the legislation in the Senate, just responded to the Trump veto. He said, “President Trump’s veto of my bipartisan bill to help our veterans was a victory for Education Secretary DeVos and the fraud merchants at the for-profit colleges. My question to the President: in four days did you forget those flag waving Memorial Day speeches as you vetoed a bill the veterans were begging for?”

DeVos’s new rule is supposed to implement a 1995 federal law, referred to as borrower defense, that allows students deceived or abused by their colleges to petition the Department for loan relief. The theory behind the law was that by making a college eligible for federal student loans, the Department was essentially placing its Good Housekeeping seal on the school, and thus the Department should let the aggrieved students off the hook.

But the law lay dormant until the spectacular meltdowns of some large, bad-acting for-profit chains near the end of the Obama administration. The Department under Obama, after extensive deliberations with stakeholders, issued a borrower defense rule that gave students a fair chance for loan cancellation in the event of school misconduct. It also prohibited colleges getting student aid from denying students the right to sue for their injuries.

The 2016 Obama-era borrower defense rule did not come close to making whole the injured students, who would not get back hundreds of hours devoted to their low-quality educations, or the money paid out of their own pockets or still owed for high-interest non-government loans. But the rule did something to help students — and to highlight the worst school offenders.

The for-profit college industry worked frantically to stop the Obama borrower defense rule, and harshly attacked it once it was issued.

After Donald Trump took office, his new education secretary, DeVos, hired former executives from for-profit colleges as her top aides. Then she completely gutted the borrower rule, amid other steps that aided for-profit schools and hurt students and taxpayers. Under DeVos’s version of the rule, each injured student might need their own team of lawyers and private investigators to meet the absurdly high standard of proof required for loan cancellation.

The Institute for College Access and Success concludes, based on Department of Education data, that under the DeVos rule, students scammed by their colleges will be forced to repay 97 percent of their resulting debts.

And not only would students be unable to get loan relief from the government, they also could be prevented from suing their schools, because DeVos’s rule would again allow colleges to use “mandatory arbitration” clauses and other fine print to prevent lawsuits.

DeVos based her rule on the theory — backed up with zero evidence — that the real fraudsters were not the for-profit colleges but crooked students who would game the system for “free money.”

In addition to issuing her anti-student rule, DeVos has refused to act fairly, or act at all, on pending student requests for loan relief.

Leading veterans organizations strongly opposed the DeVos version of the borrower defense rule, which was scheduled to go into effect in July if the resolution did not become law. American Legion National Commander James W. “Bill” Oxford wrote a letter saying the DeVos rule is “fundamentally rigged against defrauded borrowers of student loans.”

But congressional Republicans, with few dissenters, have firmly backed the for-profit college industry for more than a decade, despite its record of blatant waste, fraud, and abuse with taxpayer dollars, a record that has left hard-working Americans across the country buried in student debt, with no improvement in their career prospects. The GOP’s embrace of this awful industry has coincided with heavy expenditures by the for-profit schools on campaign contributions.

That record of GOP fealty to the for-profit college industry made passage of the resolution by the Republican-controlled Senate, over the opposition of Senate Majority Leader Mitch McConnell (KY) and Senate health, education and labor (HELP) committee chairman Lamar Alexander (TN), truly remarkable.

The win was a tribute to the determination and leadership of Senator Durbin, a tireless advocate for students, freshman Rep. Susie Lee (D-NV), a new Hill champion, and other members.  Pro-student and veterans advocacy groups, and former students themselves, also fought hard for the measure, with strong outreach to GOP offices.

Durbin spoke on the Senate floor just before the Senate vote. He described the false promises that predatory for-profit colleges have made to prospective students — promises about job prospects, starting salaries, and college costs. “These students were basically defrauded,” Durbin said. “These schools take the money and run, and the students end up holding the bag, with massive debts.”  He called on his Senate colleagues to give former students “a fighting chance to rebuild their lives.”

As the Durbin-Lee borrower defense resolution moved forward in Congress, and with for-profit college lobbyists continuing to freak out, the White House issued a formal Statement of Administration Policy declaring that if the bill passed the Congress, the president’s advisors would recommend that he veto it. The statement claimed that congressional overruling of the DeVos rule “would restore the partisan regulatory regime of the previous administration, which sacrificed the interests of taxpayers, students and schools in pursuit of narrow, ideological objectives.” The Administration also has claimed the rule would cost taxpayers too much money.

But there’s nothing narrow or ideological about writing wrongs for low-income students steered into high-priced, low-quality programs through deceptive ads and coercive recruiting tactics. And although the Obama version of the rule would cost money up front, in the long run it would have saved billions for taxpayers by compelling the Department of Education to push predatory schools out of the federal aid program. That’s exactly what the for-profit college industry has feared.

In December, the Washington Post reported that Trump was demanding from his staff a plan to address student debt, because he saw his Democratic rivals gaining political ground on that issue. And Politico reported that when Senator Alexander told Trump in a meeting that he would defend the administration by opposing the borrower defense resolution, Trump responded, “I have sort of a neutral position. I’m in between.”

But later Politico reported that Trump subsequently “indicated that he actually was in favor of DeVos’ regulation after speaking with her on the phone, according to a Senate GOP aide.”  And the White House by tweet reaffirmed its formal opposition to the resolution.

Finally, Angela Morabito, a Department of Education spokeswoman, provided an ugly comment to media outlets on the Senate’s action: “It’s disappointing to see so many in Congress fooled by misinformation from the left and the fake news narrative about our efforts to protect students from fraud. Students, including veterans, who are defrauded by their school and suffer financial harm as a result deserve relief, and our rule provides them relief.”

Trump pledged during his 2016 campaign to help U.S. veterans, people in the “inner cities,” and “the forgotten men and women.” Those are many of the victimized students of predatory colleges.

Trump doesn’t actually care about veterans or other working Americans. He only cares about himself and his rich cronies.

Senator Patty Murray (D-WA), chair of the Senate HELP committee, just released a statement: “As the devastating economic impact of the COVID-19 crisis continues, cheated and defrauded student loan borrowers need relief more now than ever before. But President Trump’s veto means borrowers will be denied the relief they are entitled to and allow Secretary DeVos’ cruel ‘borrower defense’ rule to stand. The President and Secretary DeVos have shown that even in the midst of a pandemic, they don’t care about helping struggling students, they care about the bottom lines of predatory for-profit colleges. That’s absolutely backwards, and I’ll keep fighting to help cheated students get back on their feet.”

Given his consistent support for wealthy special interests over working Americans,Trump siding today with predatory for-profit colleges and against students and veterans is not a surprise. But given the consequences — ratifying fraud by colleges and leaving broke Americans holding the bag in a pandemic — it’s a disgraceful move.