The Trump Coalition: Rich People and Angry People Coming Together 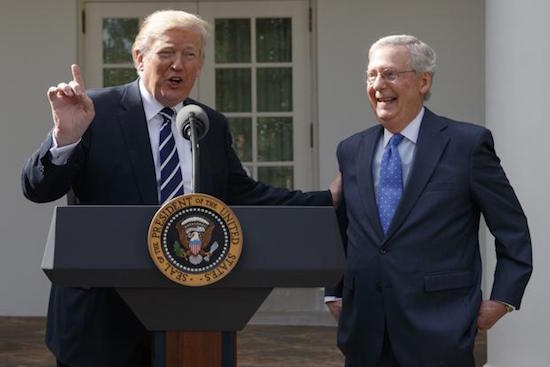 In 2007, after the Republican Party had suffered a crushing midterm election defeat, the American Prospect magazine asked me, and others, to offer new slogans for the seemingly imperiled GOP, which had announced a “rebranding” project. My idea was: Rich People and Angry People Coming Together.

Rich people love the GOP’s tax cuts for rich people, and its “deregulation” — gutting of consumer, health, safety, and environmental protections — of the corporations that rich people own.

Angry people resent the degradation of their supremacy and their financial security, and prefer to blame, variously, African Americans, Latinos, Jews, Muslims, immigrants, liberals, and government, rather than greedy corporations, for their struggles.

Donald Trump, a rich boy given every privilege who nevertheless has always been driven by grievances about being Treated Very Unfairly, was the perfect vehicle to unite rich people and angry people.

When Trump launched his candidacy with an attack on Mexican immigrants, angry people were immediately in love. You could feel it when ex-Klan leader David Duke embraced the candidate, and even more when angry white men escalated parking lot video confrontations with black men by yelling “Trump Trump Trump.”  Zealots loved Trump even more when he said there should be punishment for women who have abortions, backed religious institutions that discriminate against LGBT people, and enforced transphobia in the military.

But rich people, like the Koch Brothers, Mitch McConnell, DC Republican lobbyists, and wealthy business owners around the country, were skeptical, troubled. Trump was crude. He wasn’t a real conservative. He wasn’t a real billionaire.

Now all the rich people have come around.

Today’s Washington Post reports that the Trump reelection effort is attracting a new crop of donors, many writing five- and six-figure checks to pro-Trump political committees. Many are entrepreneurs who sat out the last election but now have warmed to Trump, because he’s helping their bottom line. It doesn’t seem as much about economic growth, which was happening at a similar pace under President Obama, as it is about Trump busting the budget to cut rich people’s taxes and Trump tearing up consumer and safety rules that might cut into rich people’s profits.

As the Post reports, “Many first-time big donors contacted by The Post were enthusiastic boosters of Trump who said they were moved to give by the president’s tax cuts, his deregulation agenda and their confidence in the economy….They viewed their contribution as an investment — not just in the country’s future but in their own personal prosperity.”

At the same time, wealthy Washington DC lobbyists who would prefer a clubbier conservative president, one who would never even have pretended to want the swamp drained, someone like Mitt Romney or Jeb Bush, quickly joined the Trump fold once he was elected and had the power to make their banking, oil, pharma, for-profit education, and other predatory clients happy.

David Koch (since deceased) positioned himself at a choice Mar-a-Lago table for the chance to chat up the POTUS he previously shunned. Corporate chieftains like Apple’s Tim Cook and Facebook‘s Mark Zuckerberg, who might have felt queasy about Trump’s bigotry, now share meals with him. The 2020 Republican convention, where Trump will be re-crowned, is open for huge corporate sponsorships, and, in sharp contrast to 2016, we can expect it will be oversubscribed.

And Senator McConnell (R-KY), the ultimate amoral operator, realized that the populist Trump was the greatest gift ever to his anti-populist rich people agenda of tax cuts, deregulation, and a torrent of pro-corporate Federalist Society judges.

Of course, these rich people alone would not provide nearly enough votes to keep Trump in power.  That’s where the angry people come in. Angry people have the numbers to primary a Republican Senator or House member who strays on anything that Trump wants.

Right now, of course, what Trump wants is to not be removed from office by the GOP-controlled Senate after his impeachment by the Democratic-controlled House. So the 53 GOP senators, many of whom despised Trump or still do, sit and listen to the House managers present overwhelming evidence that Trump withheld taxpayer-funded security assistance and a coveted White House meeting to pressure a vulnerable U.S. partner, Ukraine, to announce bogus investigations of Trump political rival Joe Biden and of the 2016 U.S. election. The managers present senators with the fact the Trump has engaged in an unprecedented stonewalling of congressional investigations — concealing documents, blocking subordinates from appearing before the House, and publicly threatening the public servants who testified truthfully about his misconduct. The managers remind the senators that President Trump repeatedly spouts propaganda pushed by Vladimir Putin.

To counter, Trump’s lawyers tell the Senate chamber blatant lies about the fairness of the House impeachment process. And the White House sends out talking points with stories like this one:

But Republican senators like McConnell and Lindsey Graham (R-SC), charged by the Constitution with being impartial jurors in the case, pronounced Trump innocent even before the case began. Just as appalling, senators including John Cornyn (R-TX), John Barrasso (R-WY), and Pat Toomey (R-PA), all emerged from Rep. Adam Schiff’s (D-CA) compelling presentation Wednesday with the same talking point: the House managers had presented “nothing new.” This was hours after the 53 Republican senators had voted against every single Democratic motion to demand new evidence – new documents, new witnesses that Trump has been concealing. It doesn’t get more cynical and corrupt than that.

(Confirming the deep ties between Trump’s inner circle and the conservative corporate establishment, many of the top Trumpsmen whose critical testimony has been withheld from the impeachment inquiry have ties to the Kochs: Mike Pence, Mike Pompeo, Mick Mulvaney, John Bolton.)

The angry people get their brawling, indignant, divisive White Supresident, which apparently is more important than the reality that factories keep closing, farms keep failing, wages don’t grow much, and health care remains way too expensive. The rich people get to keep an even bigger slice of the pie, as our roads,  bridges, mass transit and infrastructure crumble, our schools decay, our budget deficits and personal debts balloon, our climate crisis destroys communities. Rich people and angry have truly come together.  And all they need to keep it together is to pledge blind fealty to a corrupt, deceitful, pro-Putin, hateful con artist who shreds our Constitution and our republic.