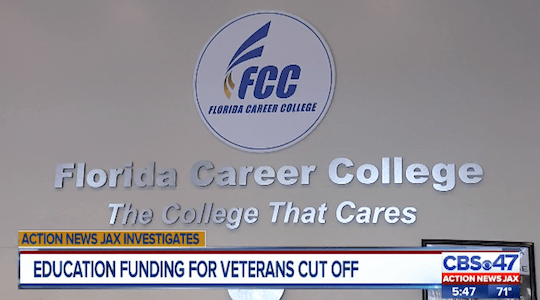 Veterans in Jacksonville, Florida, say that for-profit Florida Career College didn’t warn them before they enrolled that the school was in danger of losing its eligibility for GI Bill funding from the Department of Veterans Affairs, according to a local TV report from Action News Jax. And now the school has lost its GI Bill eligibility, leaving these student veterans stranded mid-course.

Florida’s State Approving Agency, part of the state’s Department of Veterans’ Affairs, informed Florida Career College and the VA on February 3 that it was withdrawing approval for GI Bill payments at all ten of the school’s Florida campuses. Without such approval from a state agency, the VA will not provide GI Bill money to cover veterans’ educational costs.

Navy veteran Steven Oxfurth told Action News that the school informed him and other students on February 15 that their VA funding would end in February, three months before the end of their nine-month HVAC training program.

In December 2016, after a nearly year-long process, the U.S. Department of Education removed the accrediting body ACICS as a recognized college accreditor. That meant that a school accredited by ACICS would have to find a new accreditor to be eligible for Department of Education student grants and loans after June 2018.  ACICS was and still is the accreditor for Florida Career College’s Florida campuses. The school’s website indicates that it is seeking accreditation with another body, the Council on Occupational Education.

The VA also planned to cut off GI Bill funding in June 2018.  But when the Florida state agency withdrew its approval of the school, the VA was compelled to cut off funding earlier, at the end of the school term, which was in February.

Oxfurth and a fellow Navy veteran, Bryant Patterson, enrolled at Florida Career College’s Jacksonville campus in August 2017 using their GI Bill funding. According to Action News, both men say they weren’t warned of the potential loss of their educational funding, which includes tuition money and stipends for living expenses.

Oxfurth said of the stipend, “A lot of us, myself included, that’s how we stay above the water while still going to this school.”

Patterson told the station that he and fellow vets felt, “a whole lot of despair. Some of them seemed like they were defeated, that their time out in the field, what they paid for putting their life on the line, wasn’t appreciated.”

A school administrator referred Action News Jax to an attorney, who did not respond.

Florida Career College, which offers programs in business, health care, IT, and cosmetology, as well as HVAC, is owned by International Education Corp. (IEC), whose CEO, Fardad Fateri, previously worked at the now-collapsed Corinthian Colleges and at DeVry University. Fateri is also on the board of Cogswell College, which has signed a mysterious deal to acquire DeVry, as we reported yesterday.

Fateri’s IEC acquired Florida Career College in 2014 from Education Training Corporation (ETC), which filed for bankruptcy that year. (The other chain owned by ETC, Anthem, shut down, leaving students locked out.)

The FBI had raided Florida Career College back in 2007.  According to a 2013 U.S. Department of Education inspector general memo filed at the conclusion of a six-year investigation, the raids came after undercover agents observed Florida Career College recruiters “engaged in activities that included coaching students to lie about high school graduate status, income, and tax filing status, as well as producing fraudulent high school diplomas.” That investigation closed with no criminal charges filed.

Florida Career College enrolls mostly low-income students. In 2015-16 it received $48 million in taxpayer dollars — 86 percent of its revenue — from Department of Education grants and loans, and additional federal funding from the VA and possibly also the Department of Defense. Eight of its programs flunked the first test of the Obama administration’s gainful employment rule, which measures whether graduates earn enough to pay down their student loans.

In 2015, after Corinthian Colleges announced it would shut down under the weight of law enforcement actions, IEC issued a press release declaring itself ready to “Step[] in to Support the Students … of Corinthian Colleges” by accepting them as transfers at its schools, Florida Career College and UEI College. Raul Valdes Pages, a former for-profit college industry CEO, told me at the time regarding IEC, “I believe these students should go to a community college … and not be traumatized further. A chain that has had accreditation issues and just acquired Florida Career College and Anthem, both with problems, should not, in my opinion, be the destination for broken hearted students. They can’t take more disappointment and should avail themselves to loan forgiveness.”