posted at 2:06 pm by David Halperin 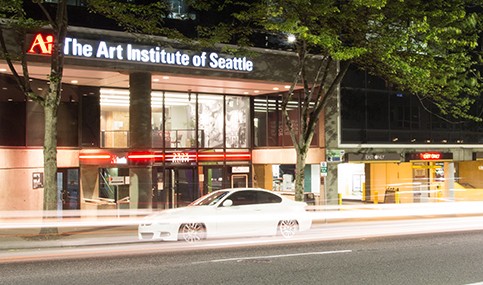 The financial and organizational turmoil at Dream Center Education Holdings (DCEH), reported to me by multiple staff in recent weeks, has spilled into the open with, at least, a new letter from the Washington state higher education oversight body. In a letter sent Thursday to the campus director of DCEH’s Art Institute of Seattle (Ai Seattle), the Washington Student Achievement Council (WSAC) said the school was now designated as at-risk of closure after, according to WSAC, “DCEH informed WSAC that it faces potential financial insolvency.”

According to the WSAC letter, Ai Seattle recently submitted to its accreditor, Northwest Commission on Colleges and Universities, a “‘Substantive Change Proposal’ regarding a planned change of control for Ai Seattle.” WSAC says that DCEH reports that it is, in DCEH’s words, “at risk of becoming financially insolvent and is now working with the United States Department of Education to reorganize Ai Seattle and the existing Art Institute campuses to preserve their ongoing operations.”

The WSAC letter continues, “Based on recent communications with DCEH, it is WSAC’s understanding that DCEH may soon enter into a receivership affecting Ai Seattle. To date, WSAC has received no substantive information that presents a viable alternative to receivership or bankruptcy for Ai Seattle. DCEH’s planned reorganization due to financial insolvency indicates a heightened potential of closure and potential negative impacts to students.”

It sure does. The fact that there have been no public announcements at all from DCEH or the Betsy DeVos Department of Education about this long-simmering matter is remarkable and disgraceful, given the risks to the educations and sunk financial and personal costs of students studying at the remaining DCEH campuses, which include eleven Art Institutes schools, 11 Argosy University campuses, 13 South University campuses, and the Western State College of Law.

DeVos’s efforts to destroy federal accountability rules that protect students and taxpayers against abuses by predatory colleges — which will be spotlighted again next week as the Department begins proceedings to radically deregulate education programs funded with taxpayer dollars — can’t halt the ongoing collapse of the predatory college industry, as schools fall under the weight of their own deceptions and mismanagement, and prospective students get the message that, in most cases, they can obtain a better education for the money at a community or public college.

In recent months, two big private equity-owned for-profit college chain operations — Education Corporation of America and Vatterott College — both shut down, locking students out in the cold. Another huge for-profit college operation, Career Education Corp., was forced by an agreement with 48 state attorneys general to pay out millions and subject itself to an outside monitor.

WSAC’s designation of DCEH’s Seattle Art Institute as “at-risk” means the school must provide the agency with contact information for all currently enrolled students and a plan for the maintenance of student records; a teach-out plan in the case of discontinued operations; and documents relating to receivership and change of control. WSAC is also requiring DCEH to post a $2 million surety bond, given that Ai Seattle’s insurer apparently cancelled their bond.

Staff report that landlords of DCEH schools across the country are coming after DCEH for non-payment of rent.  One landlord called me last month to ask if I knew why DCEH wasn’t paying rent for one campus.

DCEH staff also have been saying for weeks that the company is working to sell the Ai schools to the Los Angeles-based Studio School, a branch of for-profit Hussian College. A major investor in Studio is the New York-based investment firm Colbeck. South University is reportedly also up for sale. DCEH may be seeking to continue operating Argosy, or perhaps to sell most or all DCEH schools but continue, perhaps through a for-profit company, to contract to provide services to those schools.

EDMC, the for-profit company that sold these chains of schools to non-profit DCEH, is itself in bankruptcy. DCEH is claiming that EDMC executives made critical misrepresentations about the health of the enterprise when it sold. It does not appear that the entities that were slated to help finance the sale of the EDMC schools to DCEH — the private equity Najafi Companies and the Richardson Family Trust — want to sink more money into the operation at this point.

DCEH would want to avoid bankruptcy, because a bankruptcy filing would end the eligibility of DCEH schools for federal student grants and loans, which constitute most of the schools’ revenue.

Back in January 2018, DCEH, a new non-profit affiliate of the Los Angeles-headquartered charity the Dream Center, bought the chains from EDMC. Under a series of cynical Wall Street owners, EDMC had taken a once proud and solid career education operation, the Art Institutes, and turned it into a predatory, overpriced institution that left many former students with overwhelming debt.

Although the Dream Center promised a new start, as Republic Report previously reported, it appears that the DCEH management team under CEO Brent Richardson, former CEO of for-profit Grand Canyon University, has been seeking to leverage the operations of the newly non-profit schools to provide revenue opportunities for for-profit companies controlled by Richardson, family members, and long-time associates.

As we were the first to report, back in May, two DCEH schools, the Illinois Institute of Art and the Art Institute of Colorado, falsely stated on their website for months that they “remain accredited” even though the schools’ accreditor, Higher Learning Commission (HLC), had written the company a letter indicating that the schools were presently “not accredited.” Only after a group of U.S. senators pursued this matter did DCEH correct this falsehood. A group of students is now suing DCEH over their misrepresentation.

On July 2, DCEH announced it would, by the end of 2018, close some 30 of its schools nationwide, including the Illinois and Colorado Art Institutes, but indicated that other campuses would continue to operate. The closures did occur at the end of the year. DCEH announced in July a major push to move its programs and students online. But that plan remains imperiled because in November another accreditor, Middle States Commission on Higher Education delayed a final decision on maintaining accreditation for the Art Institute of Pittsburgh, which is the hub for the Art Institutes’ online courses. Middle States has raised concerns about “relationships involving the related entities, Dream Center Foundation and Dream Center Education Holdings (DCEH), including the identification of contractual relationships, employment, and family or financial interests that could pose or be perceived as conflicts of interest.”

UPDATE 01-14-19 4:45 pm: To add to DCEH’s woes, discredited but DeVos-revived accreditor ACICS has issued an order to the Art Institute of Las Vegas, the only Art Institute school still accredited by ACICS, to show cause why accreditation shouldn’t be withdrawn, citing low job placement.

UPDATE 01-14-19 1:15 pm: I meant to add this holiday email from Dream Center Educational Holdings to its employees, many of whom were about to lose their jobs (and one of whom forwarded it to me on Dec. 21). An “eventful year”? A holiday quote with an exclamation mark? 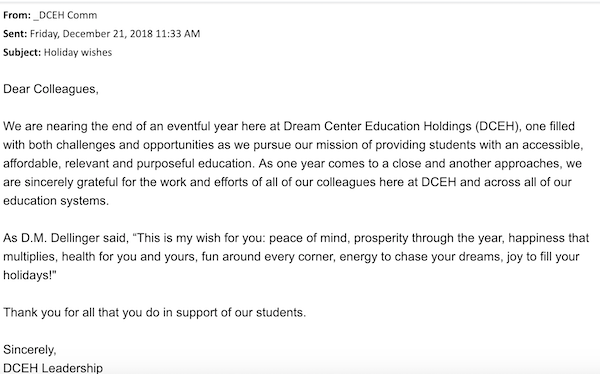