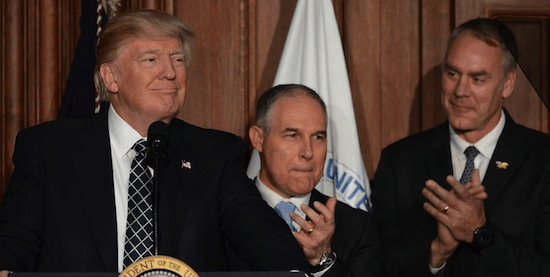 As the Department of the Interior’s inspector general did the right thing and began a conflict-of-interest investigation of newly-confirmed Secretary of the Interior David Bernhardt, the previous Interior secretary, Ryan Zinke, continued his own egregious course of doing the wrong thing. As the AP reported Tuesday, Zinke has accepted a job with Nevada-based U.S. Gold Corp, a gold-mining company that’s seeking Interior Department approval for projects on federal land.

What will Zinke do to earn all that money? Federal law makes it a crime for former officials to engage in certain efforts to influence their former agencies for one year, two years, or a lifetime, depending on the circumstances. Under President Trump’s executive order on ethics, former officials are prohibited from lobbying their former agencies on any matter for five years.

Zinke insists his work for U.S. Gold Corp. won’t constitute lobbying. “I don’t lobby,” Zinke told the AP. “I just follow the law, so I don’t talk to anybody on the executive side or influence” anyone. But Edward Karr, the company’s CEO, in explaining to AP why he hired the former secretary, cited Zinke’s “excellent relationship” with Interior and its Bureau of Land Management. Karr said the company was “excited to have Secretary Zinke help move us forward” on two mining projects it’s pursuing, one of which, apparently, would be on land controlled by Interior, where Zinke’s former subordinates, including the ultra-swampy Bernhardt, still work.

Ryan Zinke is turning his government tenure into a goldmine. Literally.

Such a questionable arrangement is consistent with Zinke’s entire term at Interior, and indeed his whole career in public office, which has been marked by a series of conflicts of interest and troubling deals. Zinke resigned in disgrace in December, when his ethics scandals had become ugly even by Trump administration standards. Before he left, Zinke demonstrated his endless grandiosity and gall by reportedly pitching himself, despite multiple ethics scandals, to replace Nikki Haley as United Nations ambassador.

Now Zinke has extended his shameless streak by taking cash from a gold-mining company that is seeking benefits from the Department he previously ran. And claiming, despite the enthusiasm of his new boss, that influence-peddling has nothing to do with it.