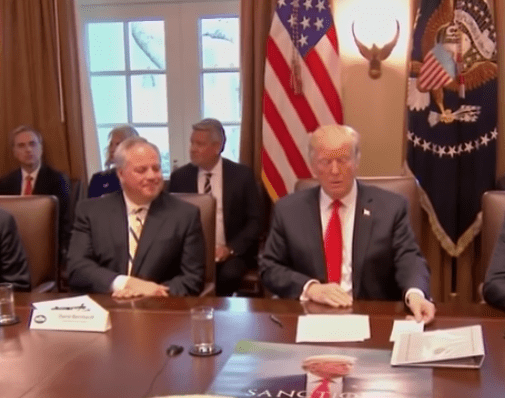 In October 2016, candidate Donald Trump unveiled a package of government ethics reforms that he said would “drain the swamp” in Washington, DC; it included a ban on former federal employees lobbying the government for five years and stricter rules on what constitutes lobbying. He seemed to be promising to undermine the power of special interest lobbyists and restore government to the people.

But Trump’s every move since being elected has been in the opposite direction. A former coal lobbyist, Andrew Wheeler, runs the Environmental Protection Agency; an ex-pharmaceutical lobbyist, Alex Azar, runs Health and Human Services; former for-profit college lobbyists control policy at Betsy DeVos’s Department of Education; and much more. On issue after issue, from weakening protections against toxic pollution, to undermining access to health care, to giving tax advantages to the rich, the administration has sided with wealthy interests over working people.

This Thursday the Senate Energy and Natural Resources Committee will hold a hearing to consider Trump’s nomination of another former industry lobbyist, David Bernhardt, to be Secretary of the Interior.

Bernhardt, currently the Department’s acting secretary and deputy secretary, would replace Ryan Zinke, whose reign was characterized by troubling conflicts of interest, paired with an extraordinarily audacious sense of entitlement and self-aggrandizement.

Bernhardt is less flamboyant, more skilled in the ways of law and government.  But in terms of the ways that money corrupts politics and policy, his record is even more concerning.

The weekend brought the revelation, in a Reveal / Politico report, that at a 2017 meeting of the Independent Petroleum Association of America (IPAA), Dan Naatz, the group’s political director, was recorded telling the 100 executives gathered that then-deputy secretary Bernhardt was their boy.  “We know him very well,” Naatz said, “and we have direct access to him, have conversations with him about issues ranging from federal land access to endangered species, to a lot of issues.”

Naatz didn’t stop there. He predicted that Zinke would be the Interior figurehead, while Bernhardt would get things done: “What secretaries of Interior do is go out to Yellowstone, go out to Tetons … have big vision for what they’re going to do… David is going to be the COO. David’s going to move the pieces. David’s going to be part of that, and we know him well.”

Barry Russell, IPAA’s CEO, bragged in the session of meeting with Zinke and with Scott Pruitt, then the EPA head. He also noted that Bernhardt, while at the powerhouse DC lobbying firm Brownstein Hyatt, had led IPAA’s legal team challenging federal endangered species rules: “The guy that actually headed up that group is now the No. 2 at Interior. So that’s worked out well.”

An Interior spokesperson told the Reveal reporter that Bernhardt “has had no communication or contact with either Barry Russell or Dan Naatz.”

But there’s no doubt that these men and other oil and mining lobbyists have gotten what they wanted out of the Trump administration, especially from their faithful servant David Bernhardt.

During that 2017 meeting, IPAA circulated a “regulatory update” memo, listing five major environmental laws and regulations they wanted to overturn. Since then, the Trump administration has gutted four of those five targets — measures that were aimed at (1) limiting water pollution from energy fracking; (2) reducing climate change-causing methane gas releases; (3) requiring restoration of public lands damaged by energy projects; and (4) holding energy companies accountable for harms to migratory birds.

An earlier Reveal report, last month, exposed Interior Department emails showing that Bernhardt played a critical role in the 2017 decision to revoke the government’s 50-year authority to use the Migratory Bird Treaty Act to prosecute companies that accidentally kill migratory birds through activities like oil drilling.

While Bernhardt is legendary for his skill at avoiding a paper trail for his activities — he  claims, “I have not personally maintained a calendar for years” — Reveal also has documented that Naatz and other IPAA representatives met in April 2018 with Todd Willens, Bernhardt’s top aide, to discuss the migratory birds issue, as well as the rules requiring restoration of public lands. Hours later, Willens met with Bernhardt.

Another investigative piece, published in the New York Times last month, revealed that, since 2017, Bernhardt has been pushing at Interior to eliminate another environmental rule, one he had long been paid to oppose as a lobbyist — protection against destruction of a species of river fish. Bernhardt admitted to the Times that four months after joining Interior, he directed a senior Department official to initiate an effort to weakening protections for the fish in order to free up water for agricultural businesses — the same businesses Bernhardt had represented while at Brownstein Hyatt.

Bernhardt’s intervention in a matter he had pursued as a lobbyist appears to have violated the Trump administration’s ethics pledge, requiring officials to refrain from such involvement for at least two years. Last month, Senators Elizabeth Warren (D-MA) and Richard Blumenthal (D-CT), along with the non-profits Campaign Legal Center and Public Citizen, called for investigations of this potential violation.

Invoking a strained and dubious interpretation of the ethics pledge — that Bernhardt’s actions at Interior are legal because he has worked on the broad issue of water rights, and not just the included issues affecting his ex-clients — Bernhardt and Interior spokespersons insist that he complied, and generally assert that he has abided by all regulations governing ethics and recusal. But even if that were true, the scandal, as is often the case, isn’t what’s illegal; the scandal is what is still legal in swampy Washington DC.

Bernhardt epitomizes the Washington revolving door — getting paid by taxpayers to master policy issues in government jobs, and cashing in on his experience and connections as an industry lobbyist. In 1998, he jumped from his job as an aide to a House Republican to join Brownstein Hyatt. He later entered the George W. Bush Interior Department as a top aide to Secretary Gale Norton and then as the Department’s chief lawyer, and he worked to overturn the congressional prohibition on oil drilling in Alaska’s Arctic Wildlife Refuge. When the Bush administration ended, Bernhardt returned to Brownstein Hyatt, where he lobbied for or advised dozens of energy and mining companies and trade associations, like IPAA, seeking to end or avoid Interior regulations.

Among other work at Brownstein Hyatt, Bernhardt lobbied on behalf of EP Energy to delay protections against air pollution from coal-fired power plants. He worked for Rosemont Copper,  which seeks to dispose of toxic waste in the Coronado National Forest in Arizona. In the aftermath of the BP Deepwater Horizon gulf oil disaster, Bernhardt lobbied to expand offshore drilling on behalf of Cobalt International Energy, a company probed by federal law enforcement agencies for violations of the Foreign Corrupt Practices Act.

More than 150 organizations joined a letter opposing Trump’s appointment of Bernhardt as deputy secretary, charging that the nominee was “laden with conflicts of interest that raise serious questions about his ability to act in the public interest.” (More than 160 groups signed a new letter, released today, opposing Bernhardt’s confirmation to be secretary.) Indeed, critics have labelled Bernhardt “a walking conflict of interest,” and as if to prove that, he reportedly carries with him a small card that lists all his potential conflicts.

While brushing aside concerns about his own conflicts, Bernhardt charged last month in a letter to Interior staff that Department’s “ethics challenges were part of a mess that we inherited” from the Obama administration, which he appeared to denounce for “a culture of ethics avoidance” and “an avalanche of ethical misconduct.”

Bernhardt and other Brownstein Hyatt lobbyists have, since 2013, donated almost $1 million to senators who will vote on his confirmation for the Interior job.

And yet another report, in the Times today, shows that Bernhardt led an effort to block the release of a government analysis of the dangers that various pesticides create for a range of endangered species, and replace it with a narrower approach sought by chemical manufacturers. One of those companies, Dow, had donated $1 million to the Trump inauguration.

CNN has calculated that since Bernhardt joined Interior in 2017, the Department has made at least 15 policy changes or proposals that would directly aid former Bernhardt clients.

Trump seems to love Bernhardt these days, because, unlike former defense secretary James Mattis, who slow-walked Trump’s demand for a military parade, Bernhardt has been willing to indulge the president’s fantasy for a Trumpified 4th of July celebration. “David, you’re taking care of that,” Trump said, regarding the July 4 plans, to Bernhardt at one of his staged cabinet meetings, “and we’ll see how it works out with schedules and everything else.” Bernhardt also escorted Trump and Vice President Pence on a 90-second visit to the Martin Luther King memorial on MLK day in January.

For Bernhardt, a master DC operator, playing Trump probably isn’t too hard. Give him his parade, tell him you’re making America great again, and you can go to town destroying protections for public lands, clean air and water, and endangered species, and protections against dangerous climate change, all to benefit your former, and likely future, corporate clients.

With revolving door men like David Bernhardt running our government, Trump’s promises to drain the swamp, and to fight for every day Americans, are revealed to be, as someone might put it, a total and complete hoax.