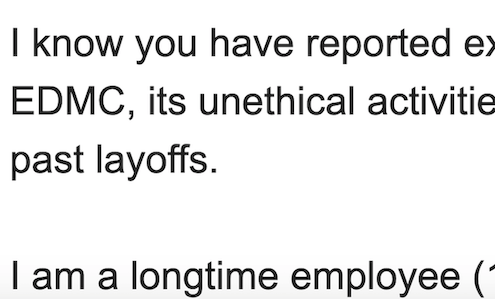 It started with a message out of the blue, sent by “John Doe,” a Dream Center Education Holdings employee who was not yet ready to tell me his or her name. “I know you have reported extensively on for-profit institutions, including EDMC, its unethical activities, and disregard for staff,” the employee began a message to me in early April 2018, using an acronym for Education Management Corp., the Pittsburgh-based for-profit business that ran the career education schools the Art Institutes, Argosy University, and South University, before multiple law enforcement probes for deceiving students and defrauding taxpayers brought the company down.

Collapsed EDMC had agreed in March 2017 to sell the schools to a new subsidiary of the Los Angeles-headquartered, faith-oriented charity the Dream Center, and some Members of Congress and advocates (including me) had raised questions about the deal, about whether the new subsidiary, run by Brent Richardson, former CEO of for-profit Grand Canyon University, would operate the schools in a manner that truly served students.

But the new Trump administration had declared itself annoyed by Obama-era efforts to restrain supposed “innovation” in higher education, and Secretary of Education Betsy DeVos, who staffed up her Department with former senior executives of for-profit colleges, gave an initial thumbs-up to the deal.

The schools, under DCEH, were in business, enrolling new students and aggressively advertising their new non-profit status, in a world where predatory recruiting and awful student outcomes had given for-profit colleges a bad name. They already were announcing new expansions, like a partnership with unaccredited coding school Woz U, whose figurehead was Apple co-founder Steve Wozniak.

The message I received that morning in April continued, “I am a longtime employee… who came as part of the sale to Dream Center Education Holdings. I and a colleague have deep knowledge of DCEH activity that is far more unethical, including violation of regulatory requirements, misrepresentation to students” and nepotism by top DCEH leaders.

“As you can surely understand, my identity must remain anonymous,” the employee continued. “If this is something you would like to know more about, I can be contacted at this address.”

It was something I wanted to know more about, and extensive engagement with this whistleblower and a colleague, who soon were willing to provide their names, led to more sources with inside information, to documents, and clues hiding in plain site on the Internet.

On May 16, 2018, I published here a lengthy article establishing, among other things, that:

— DCEH was lying to students, claiming its Illinois and Colorado Art Institutes campuses were accredited, when in fact their accreditor had suspended that status.

— DCEH was failing to comply with obligations to disclose information about its programs to students, as required by an Obama-era rule called gainful employment.

— Richardson and other top DCEH executives who were his relatives or long-time associates appeared to be seeking to leverage their control of the operation to make money for Woz U and a web of other for-profit ventures they owned or staffed.

On May 31, after speaking with six more DCEH employees in the wake of the first article, I published again, exposing that predatory practices and conflicts of interests had ramped up all across the DCEH network of schools. More insiders soon fueled numerous additional reports, with documents and leaked audio that offered more evidence of troubling behavior at DCEH and, also, within the DeVos Department of Education, which seemed to be going to great lengths to prop up the DCEH operation.

While I was the first to surface evidence of DCEH misconduct, employees also had been talking to the court-appointed lawyer tasked with monitoring the operation’s compliance with the $200 million agreements that settled fraud lawsuits brought against EDMC by the U.S. Justice Department and state attorneys general. The monitor’s public report eventually detailed a similar set of abuses.

The media, starting with reporter Daniel Moore of the Pittsburgh Post-Gazette, began writing about the accreditation deception and other problems at DCEH. Eventually the New York Times, Washington Post, Inside Higher Ed and numerous other outlets delved deep into the DCEH crisis.

Democrats in Congress — including senators Patty Murray (WA), Dick Durbin (IL), and Elizabeth Warren (MA) — began asking DeVos questions about DCEH and the Department of Education’s role in the debacle. After Democrats took over the House of Representatives in January 2019, committees led by Representatives Bobby Scott (VA) and Raja Krishnamoorthi (IL) began obtaining more evidence, including documents showing that the Department facilitated the accreditation deception. Democrats in both houses built a record suggesting that DeVos’s top education aide, ex-for-profit college executive Diane Auer Jones, had not told the truth about her knowledge of DCEH’s accreditation deception and her role in the process.

The non-profit law firm National Student Legal Defense Network, meanwhile, had filed lawsuits against DCEH and DeVos on behalf of former students, actions that put pressure on the Department of Education and led to the disclosure of still more information.

The results of all this digging have been dramatic: Dream Center Education Holdings abruptly announced in late 2018 that numerous campuses would close. DCEH collapsed, and Brent Richardson resigned. DeVos and Jones turned over most of the remaining schools to another new non-profit that, we first reported, has its own troubling, hidden ties to a for-profit operation. A court-appointed receiver for DCEH squabbled with the new owners, the Department and others, amid allegations of misused and missing money. DeVos and Jones found themselves on the ropes, facing congressional inquiries, hearings, and threats of subpoenas for refusing to testify or provide documents.

The state of Arizona, often seen as friendly to for-profit college interests, cited the Dream Center debacle in taking away the educational license of Woz U, whose board and investors included Brent Richardson, and the coding school stopped enrolling students.

And on Friday, under pressure from Congress and lawsuits, DeVos announced that some 1500 Illinois and Colorado Art Institutes students who were victims of the accreditation deception would get some of their loans cancelled and grant eligibility restored. But DeVos unjustly blamed the accreditor, not DCEH or the Department, for the harms to students, and she didn’t offer nearly enough to make these or other former students whole.

Indeed, there’s still a more lot wrong: Broke former students of EDMC/DCEH, and other for-profit schools across the country, are still making payments or facing aggressive bill collectors over loans for overpriced educations that did nothing for their careers. Betsy DeVos and Diane Jones are still in power despite their affronts to students and taxpayers. Brent Richardson, and former EDMC executives and investors like Jeffrey Leeds, are still really rich.

But Friday’s announcement was a step toward righting a wrong and helping some struggling Americans get back on their feet.

One way or another, the abuses and deceptions at DCEH, and inside the DeVos Department of Education, were going to be exposed; there was too much wrongdoing, shared with too many people, for the secrets to remain hidden. But it was a single courageous, ethical, determined whistleblower who started the process, showing the power that one individual, armed only with the truth, can wield.