posted at 4:29 pm by David Halperin 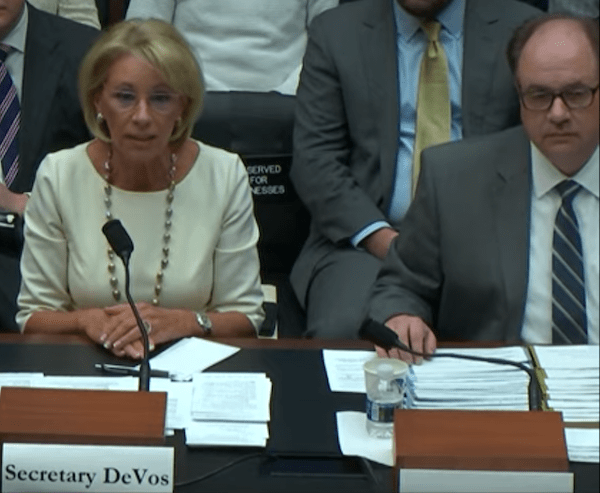 Faced with a roomful of Democrats, now in control of the House of Representatives, who questioned her hard about the Department of Education’s failures to follow the law, help students, or prevent ugly collapses of bad-acting for-profit college chains, Secretary Betsy DeVos took a page from her boss, Donald Trump: She repeatedly blamed Barack Obama’s administration.

The Special Olympics travesty seems mostly behind DeVos, but she was left to defend the Trump administration’s remaining severe education budget cuts, civil rights curtailment, misrepresentations about the proposed arming of school teachers, and other outrages, including — our focus here — her Department’s assault on measures to protect against predatory abuses by for-profit schools.

In her appearance Wednesday before the House Education and Labor Committee (video), DeVos seemed somewhat more assured than in past public outings, through she often fell back on her habit of repeating bland, canned phrases, as a Department helper sat silently by her side and shuffled papers from a big pile as new topics got raised.

When pressed, though, DeVos on multiple occasions blurted out attacks on Obama or other angry talking points originated by the for-profit college industry, where many of her top higher education aides previously worked.

When Rep. Lucy McBath (D-GA) asked when the Department of Education had learned of the real financial turmoil inside the career colleges that Dream Center Education Holdings (DCEH) had purchased from for-profit EDMC, DeVos at first dodged, insisting that her Department had never given final approval for the sale, even though it had issued the tentative backing that allowed the deal to proceed. But eventually DeVos sought to deflect blame for the sudden shutdown of most DCEH campuses, leaving students locked out; she declared that “the previous administration went to war” against for-profit schools.

McBath retorted, “The Department’s failures under your leadership led to this crisis.”

McBath is right. The Obama administration, in its final years, was at last trying to do the right thing, starting to push out bad actors, and prioritizing aid for good schools, in order to protect students and taxpayers. The DeVos Department’s efforts to cancel accountability measures and to approve troubling sales of for-profit chains has allowed bad actors to act badly, engaging in deceptive practices and financial irresponsibility that has led to some school collapses — and to continued abuses by chains, such as Career Education Corp. and Bridgepoint, that remain in operation. The way the failed chains, ECA and Vatterott as well as DCEH, shut down — enrolling students until the very end and then leaving them in the cold, without good options for continuing their studies — underscored their lack of concern for students and suggested that they should have been cut off from federal aid a long time ago.

But when Rep. Susie Lee (D-NV) talked about how for-profit colleges prey on people in her Las Vegas area district — low-income, people of color, veterans — and asked whether students from predatory and collapsed schools deserve a legal avenue to have loans relieved, an avenue DeVos has been blocking, DeVos again blamed the Obama administration. “It is really regrettable,” DeVos said, “the number of institutions that have been closing, and I would say it’s due in large part to the policies of the previous administration really going after these entities and these institutions.”

Rep. Joe Morelle (D-NY) asked whether the Department had a letter of credit on file from DCEH’s Argosy University — to provide resources in the event of a school collapse — on the day that chain closed. DeVos waffled, said she didn’t know, and finally said that appropriate letters of credit have been in place. Morelle responded by referencing court documents indicating that all DCEH letters of credit had expired.

After I tweeted from the hearing room about this exchange, DeVos’s press office retweeted me, with this comment: “Letters of credit were on file and cashed out before expiring. Those funds were on hand to support students as we worked with institutions to find teach out options.” The apparent differences between the court fillings, DeVos’s testimony, and her office’s tweet highlight the urgency of the Department making timely and full disclosures on DCEH and everything else. As was true under previous administrations, but seems even more acute today, the Department conducts way too much business in secret, keeping the public, including students, in the dark, and leading to bad outcomes.

When Rep. Suzanne Bonamici (D-OR) asked about DeVos’s controversial decision to reinstate accreditor ACICS, which was asleep at the switch in certifying awful for-profit chains like the now-closed Corinthian Colleges and ITT Tech, and about the Department’s reliance on demonstrably false information in justifying its action, DeVos attacked the process by which the Obama administration reached its prior conclusion to dump ACICS. (In so doing, DeVos echoed the wholly inappropriate and perhaps illegal effort earlier this year by DeVos’s deputy, Mick Zais, to derail an investigation of the DeVos decision by the Department’s independent inspector general; Zais had asked that the IG investigate the Obama decision instead.)

The Democrats were well-prepared, asking DeVos, for example, about her failures to implement (1) the Obama borrower defense rule, which created procedures for cancelling loans of students ripped off by their colleges; (2) the Obama gainful employment rule, which penalizes colleges for consistently leaving students with overwhelming debt; and (3) an Obama-era rule seeking to reduce the high percentage of students of color in K-12 special education classes. The DeVos efforts to stall on these and other Obama rule has led to repeated losses in court, yet the Department continues its defiance, failing to follow court mandates or to respond to related information requests from Congress.

Rep. Mark Takano (D-CA), who also chairs the House Veterans Affairs committee, pressed DeVos on whether it was true that she has not approved a single student borrower defense claim, and whether she has ordered subordinates to prioritize denials over approvals. DeVos evaded the question over and over, and falsely blamed pending litigation, when litigation had in fact led to a court ordering her to implement the Obama borrower rule. She also tried to change the subject from borrower defense to a related provision allowing loan forgiveness where a school closes.

Finally, though, DeVos fessed up, telling Takano that her Department simply did not agree with the Obama borrower defense rule.

Similarly, when Rep. Lori Trahan (D-MA) asked DeVos whether she had asked the IRS or the Social Security Administration to delay an agreement with her Department on income data sharing in order to scuttle enforcement of the Obama gainful employment rule, DeVos dodged but eventually declared that her Department  didn’t agree with that rule, either.

In short, DeVos was saying, despite all the evidence to the contrary, we are complying with the law, but, by the way, we hate the law.

Trahan also asked DeVos why she had dismantled the enforcement unit created under Obama to enforce rules against predatory abuses. DeVos insisted that the unit was still “adequately” staffed. She was unable to say how many people still worked there, although she insisted there were more than two.

Rep. Andy Levin (D-MI) asked again about the some 158,000 student borrower defense claims pending, and asserted that the DeVos Department is violating a court order by having its collection agents demand repayment from former Corinthian Colleges students who are entitled to relief. DeVos read a talking point about how the Department is acting “diligently,” but she was unable to say how many students were being illegally harassed in this way.

Levin also pressed on another provision of the borrower rule, one that requires the Department to revoke federal aid eligibility for schools that require students to give up their right to sue in court over disputes, and instead accept mandatory arbitration. DeVos responded with more evasion but eventually stood up for what she really believed, saying that the Department is concerned not just with protecting students but also protecting institutions. But the Department allowing for-profit colleges to take billions in taxpayer aid, while those schools demand that injured students surrender their legal rights, is a total surrender to the interests of bad actors. No legitimate non-profit or public college uses such egregious ripoff clauses in enrollment agreements with their own students.

Rep. Ilhan Omar (D-MN) got down to what may be driving the DeVos Department to repeatedly push policies that favor predatory institutions — the fact that so many of her top aides previously worked in the for-profit education or financial industries. Specifically, Omar asked about Wayne Johnson, whom DeVos has put in charge of the NextGen student loan streamlining effort, and who previously worked in the financial services sector — are any of Johnson’s former firms bidders on the project? DeVos insisted that the Department has strong ethics reviews and no conflicts of interest. But when Omar asked if the Department would provide the committee with NextGen procurement documents, DeVos said no.

Questioned by Rep. Joe Courtney (D-CT) about why her Department secretly took away access to information regarding student loan servicers from state attorneys general, who have been at the forefront of protecting borrowers, DeVos replied that federal student aid is a federal program and shouldn’t “involve every single state.”

And Rep. Pramila Jayapal (D-WA) pressed DeVos about a recent Department higher education rule-making proceeding, which tried to cram a wide range of unrelated regulatory rollbacks into one mega-session. The DeVos Department had stacked the deck, limiting representation for students and consumers on the stakeholder negotiating panel to just two people, among a big group of institutional representatives, and blocking the participation of state attorneys general.  DeVos read talking points and avoided answering.

In a room whose walls are adorned with portraits of education committee chairs, some of whom — John Boehner, Buck McKeon, John Kline — eagerly did the bidding of the for-profit college industry, it is inspiring to see so many committee members — unfortunately, only Democrats — fighting to protect students against for-profit abuses. In the past, many Democrats did not make the issue a priority, or, like their Republican counterparts, combined fealty to the industry with receipt of extensive campaign contributions.

What remains a tragedy is that the committee has to spend so much effort trying to shame the shameless Trump administration into ending its completely wrongheaded collusion with for-profit college fraudsters, when there are so many genuinely difficult higher education challenges that need attention.

Today’s House is a heady environment, with explosive hearings in adjoining rooms, spurred by canny new questioners like Omar,  Lauren Underwood (D-IL), Jahana Hayes (D-CT), Katie Porter (D-CA), and, obviously, Alexandria Ocasio-Cortez (D-NY), and anchored by savvy chairs like Maxine Waters (D-CA), Elijah Cummings (D-MD), and the Education and Labor head, Bobby Scott (D-VA). They’re causing Trump officials, charged with defending outrageous policies and law violations, to lose their minds in public, the latest being Treasury Secretary Steve Mnuchin’s call for Waters to bang her “gravel” so he could leave the room for an “important meeting.” DeVos, who exchanged big smiles with me in the hearing room on Wednesday (presumably she had no idea who I was or that I had just sued her), didn’t come unhinged like Mnuchin (my long-lost college newspaper non-friend), but in the end she underscored her contempt for students who have fallen victim to predatory schools — and for the previous administration that sought to help them.