In Whitaker’s Wake, Will Trump Replace Mattis With Another Sycophant?

posted at 9:15 am by David Halperin 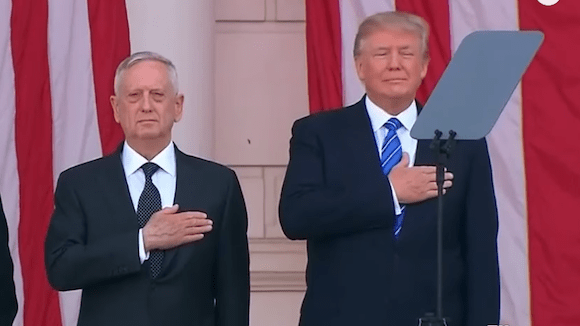 Jeff Sessions, for all his hard-line ideological views, seemed as attorney general to act with basic integrity and respect for constitutional principles, including the independence of the judiciary and the need for Justice Department investigations to be free of presidential meddling. By contrast, his acting replacement, Matthew Whitaker, appears ready to do anything to cater to Donald Trump and thus advance his own career.

Having a yes-man at the Justice Department helm, even temporarily, poses serious risks for Robert Mueller’s probe of Russian interference in the election, and, more broadly, for our justice system and the rule of law.

But matters could become even more grave if Trump makes a similar switch at the Department of Defense, replacing Secretary Jim Mattis with another sycophant. On this Veterans Day, we owe it to our troops, and all Americans, to examine the risk that Trump could place another toady in charge of our armed forces.

Whitaker, who took over at Justice last week after Trump forced Sessions out, has a dubious background that includes declaring, as a U.S. Senate candidate, that judges should have a “biblical view” and that federal courts are the “inferior branch” of government. He ran a dark money operation, Foundation for Accountability and Civic Trust (FACT), funded by the Koch-connected Donors Trust, that attacked state attorneys general for pursuing Exxon Mobil over climate change. He was involved in, and made threats to customers on behalf of, World Patent Marketing, an invention promotion business that scammed veterans and others; the company, reportedly investigated by the FBI, settled with the Federal Trade Commission for $25 million this year, without admitting guilt.

What seemed to fuel Whitaker’s rise — and his selection over the logical choice for acting AG, deputy Rod Rosenstein — was his fealty to Trump. At FACT, he issued a statement minimizing the significance of then-Senator Sessions’ contacts with Russian officials; by contrast, Sessions himself concluded such contacts required his recusal from the Russia probe, a decision that turned Trump against him. Whitaker then made repeated appearances on CNN to argue that the Mueller probe was going too far, and he apparently admitted he was doing these TV shots in hopes the White House would notice him as a Trump defender. It worked: Trump, reportedly, was impressed, and Whitaker soon got a West Wing interview and eventually the job as Session’s chief of staff.

Although Trump insisted on Friday that he does not know Whitaker, the facts show otherwise. Whitaker attended more than a dozen Oval Office meetings with Trump, sometimes in Sessions’s place, and seemed to be maneuvering to move up. The Washington Post, citing a senior administration official, reported, “When Trump complained about the Mueller investigation, Whitaker often smiled knowingly and nodded in assent.” Not surprisingly, then, Trump said on “Fox & Friends” last month, “Matt Whitaker’s a great guy.”

Trump does not appear to see Secretary Mattis as quite as great a guy. Last month on “60 Minutes,” Trump said of Mattis, “I think he’s sort of a Democrat, if you want to know the truth.” Asked about disagreements with Mattis regarding NATO, Trump said, “I think I know more about it than he does.” Trump speculated that his defense secretary “may leave… I mean, at some point, everybody leaves.”

Like the ousted Sessions and the fired Secretary of State Rex Tillerson, Mattis may not have sucked up sufficiently to Trump. While Mattis has denied a report that he’s compared Trump to an elementary school student, he notably was the only senior official who did not obsequiously praise the Commander-in-Chief in an early televised cabinet meeting.

More importantly, Mattis has slow-walked Trump orders on matters from the dead serious (a reported command to assassinate Syrian president Bashar al-Assad) to the ridiculous (an expensive military parade) to the bigoted (an unlawful ban on transgender troops). He blocked a White House order to withdraw dependents of U.S. troops in South Korea, concerned about the aggressive message such a move would send to Kim Jong Un. And he has restrained Trump’s impulse to torture terrorism suspects.

But more recently Trump has become more assertive in making decisions Mattis seems unlikely to have favored. Trump’s demand to send thousands of troops to the Mexican border to confront a ragtag caravan of migrants, and his surprise unilateral announcement of a new military branch, Space Force, suggests the kinds of freelancing he might pursue in the absence of adult supervision — wasting money, undermining alliances, putting our troops in peril, and risking catastrophic war.

Trump’s decision over this Veterans Day weekend to skip a ceremony in France honoring Americans who died in World War I — because it was raining — shows his lazy, ugly contempt.

Trump replaced Tillerson and former national security advisor H.R. McMaster with, respectively, Mike Pompeo and John Bolton, men more inclined to flatter and indulge him. Pompeo said in January, prior to succeeding Tillerson: “I have seen 25-year intelligence professional receive briefings. I would tell you that President Trump is the kind of recipient of our information at the same level that they are”; Trump “has the grounding for him to be able to grasp this information in a way that he can ask sophisticated questions that then lead to important policy discussions.” Bolton, as a Fox News commentator before joining the Trump White House, said of a Trump address at the UN, “in the entire history of the United Nations, there has never been a more straightforward criticism of the unacceptable behavior of other member states.”

If Mattis were to leave and be replaced by another sycophant, there might be little standing between Trump and his wildest national security whims, on matters from Europe to the Middle East to Russia, China to North Korea, human rights to nuclear weapons.

And frankly, an independent, Mattis-run Defense Department may prove valuable if Trump loses the 2020 election but insists the vote was rigged and refuses to leave.

The Senate will remain in Republican hands by a narrow margin. GOP senators did little to stand up to Trump’s excesses in the last Congress, but there were, perhaps, some limits. After his vengeful firing of James Comey, aimed at curbing the Russia probe, Trump nominated a law enforcement professional, Christopher Wray, rather than a political crony, to run the FBI. But whether the new Senate would demand similar integrity and independence for Sessions’s permanent replacement, or for a successor to Mattis, remains to be seen.

For the sake of our national security, let’s hope Mattis finds a way to stay in the job.

David Halperin, a lawyer, previously served on staffs of the National Security Council and the Senate Intelligence Committee.