posted at 5:59 pm by David Halperin 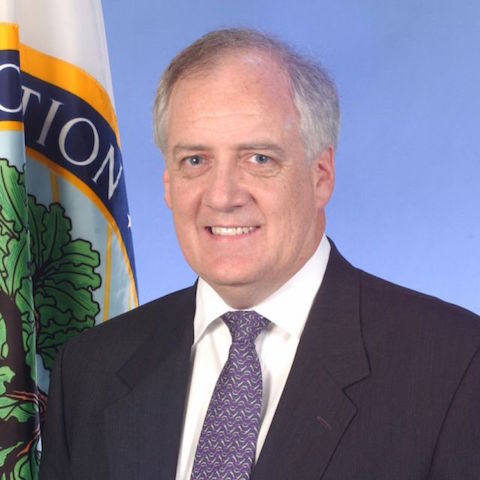 Manning is a career Department official whom Trump education secretary Betsy DeVos, in April 2017, placed in the role of Acting Under Secretary, the number three official in the Department, with responsibility for higher education. In January 2018, DeVos also put Manning in charge of the Department’s critical Office of Federal Student Aid (FSA), which oversees compliance by colleges with Department rules regarding taxpayer-funded grants and loans.

The senators, in their letter to Department of Education Ethics Official Marcella Goodridge-Keiller, suggest that Manning holding both positions simultaneously may present conflicts. But they also are concerned about Manning’s connections from his period working in the private sector before rejoining the Department at the start of the Trump administration.

Sometime between 2015 and 2017, Manning was paid $110,000 for work as a consultant by USA Funds, a student loan guarantee and debt collection agency run by William Hansen. In December 2016, USA Funds transferred its federal student loan business to Great Lakes Higher Education Corporation. Under the deal, Great Lakes provides annual payments to USA Funds, which last year changed name to Strada Education Network. As Republic Report recently detailed, non-profit Strada, under Hansen, now seems to exist mostly to pay big salaries to Hansen and other top executives, to invest, with private equity firms, in for-profit education, and to make “charitable” grants that often seem to align with the organization’s investment goals. It does not seem to function like a genuine non-profit charitable group.

Manning’s consulting work for Hansen’s USA Funds was not the first time the two men collaborated. When Bill Hansen was Deputy Secretary of Education under George W. Bush, Jim Manning served as his chief of staff. As the senators note, “This was a period when the Department came under significant scrutiny for lax oversight of the bank-based lenders in the Federal Family Education Loan (FFEL) program. An investigation by the Senate Health, Education, Labor and Pensions (HELP) Committee documented aggressive steering practices, including lenders providing lavish gifts and travel to financial aid officials in an attempt to influence student borrowing decisions.”

In 2007, Manning, then serving as Acting Assistant Secretary at the Department, confirmed the conclusion of Department lawyers that another student loan agency, PHEAA, illegally profited from more than $100 million in false claims against taxpayers, yet he relieved the agency of any obligation to repay these amounts. A PHEAA official, testifying at a civil trial in November, 2017, said of the Manning 2007 letter, “We got the joke.”

They also note that Strada appears to invest in Student Connections, a company that assists colleges in lowering their cohort default rates; if those rates get too high, schools can lose their eligibility for federal aid.

The senators write, “it is likely that Mr. Manning has been involved in policy efforts that could have impacts on companies that Strada and one of its private equity partners—Sterling Partners—are invested in or may invest in. Sterling Partners has numerous policy interests before the Department; for example, the firm recently had an 88 percent ownership stake in the InfiLaw Corporation, which ran the defunct for-profit Charlotte School of Law, which sought additional federal funds before its collapse.”

“It is unclear,” the senators write, “if Mr. Manning has taken steps to limit his role in matters where Strada and its private equity partners have investments.”

In addition, USA Funds had sued the Department in 2015 over over a new policy letter barring companies from charging loan collection fees to students who defaulted but promptly made arrangements to resume payments. In March 2017, two months after Manning went to work for DeVos, her Department revoked the policy letter, giving Hansen, Manning’s former client and boss, the victory he sought. A Department of Education spokesperson told ProPublica, which first reported on the Manning-Hansen connection, that Manning had recused himself from matters related to Hansen’s company, and Strada said there was no conflict of interest.

The senators write to the Department ethics official that it is “unclear” if Manning participated in discussions leading up to the DeVos decision on loan fees, “although he presumably has a written agreement with you that precluded his participation in particular matters impacting USA Funds, given his previous role as a recent consultant for the company.”

The senators, finally, note that Hansen sits on the board of directors of a company called Performant Financial Corporation, which, in January 2018, received a major Department debt collection contract. Manning’s FSA is charged with awarding and overseeing such contracts. (The senators also note that Betsy DeVos was invested in Performant prior to her confirmation, and may remain invested.)

“It is unclear,” the senators write, “whether Mr. Manning participated in the decision to award the bulk of debt collection contract dollars to a company where his close business contact, Mr. Hansen, also plays a significant role.”

The senators might also have mentioned that in November 2017, Hansen joined the board of Career Education Corp., one of the worst-behaving big predatory for-profit college companies, with a long trail of law enforcement investigations and settlements, and student lawsuits. A large number of Career Education Corp. schools — branded as American InterContinental University, Briarcliff College, Colorado Technical University, Harrington College of Design, Le Cordon Bleu, and Sanford-Brown College — flunked the Obama-era gainful employment rule, jeopardizing their access to federal student aid. The Trump Department of Education under DeVos and James Manning is now in the process of completely eviscerating this rule, along with the Obama-era borrower defense rule. (Two senior DeVos higher education aides, Robert Eitel and Diane Auer Jones, previously worked at Career Education Corp.)

The Senators note that because Manning is a member of the federal senior executive service, they understand that he is not subject to, and has not signed, the ethics pledge required by a Trump January 2017 executive order. So they want to know how Manning and the Department have addressed “potentially significant conflicts of interest that appear to exist in his current roles.”

These are good questions.