posted at 9:32 pm by David Halperin 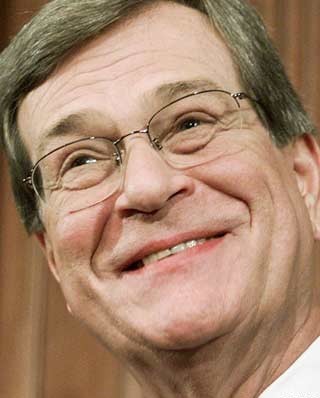 On Wednesday, former senators Trent Lott (R-MS) and John Breaux (D-LA) announced, with a big public relations blitz, a new campaign, Americans for Carbon Dividends, to address the threat of climate change. The effort is being heralded as a breakthrough by some because it is endorsed by big oil and gas companies Exxon Mobil, Royal Dutch Shell, BP, and Total, and it calls for a $40-a-ton carbon tax, incurred at the source of emissions, with revenues to be returned to citizens as dividends, perhaps $2000 a year for each American family of four.

A Lott-Breaux op-ed in the New York Times presents the deal as a compelling bipartisan solution and touts the support not only of oil companies but also the non-profit Nature Conservancy. The campaign website lists a bunch of newspaper and environmental group endorsements for the underlying $40 carbon tax concept, which was proposed last year under the banner of a group called the Climate Leadership Council, launched by Republican former secretaries of state James Baker and George Shultz and other conservatives, and now including oil companies and various establishment Democrats and Republicans.

So it sounds like Democrats and Republicans alike, and even some environmental groups, are supportive, the oil companies are at last willing to pay for their dangerous carbon emissions, citizens will get a dividend, and everyone will be happy.

But when one examines the fine print of the deal — and the financial benefits flowing to some of the people touting it — the effort looks much less utopian.

Lott and Breaux vaguely mention in the op-ed that there are “various policy details that will need to be addressed,” and assert that “this market-based solution would render carbon regulations unnecessary.” What they don’t tell you in the op-ed, but you can find on the campaign website, is that their plan is more concrete than that in terms of guaranteeing benefits to the fossil fuel industries.

“Much of the EPA’s regulatory authority over carbon dioxide emissions would be phased out, including an outright repeal of the Clean Power Plan,” according to the Lott-Breaux campaign site. That’s a reference to the 2015 plan issued by the Obama administration to control greenhouse gas emissions, after Congress rejected climate change legislation in 2009. The Trump administration is trying to kill the plan, but they will need to win a court battle to do so.

Some critics are calling the new initiative an empty public relations gesture on the part of the fossil fuel companies, and just maybe it is: A carbon tax is unlikely to pass Congress in the present environment. Even if it did, energy companies would likely be able to pass the costs of a new carbon tax on to consumers, thus wiping out the gains of the promised dividend checks. But properly constructed, a carbon tax could perhaps achieve many of the aims of the Clean Power Plan.

However, there’s another twist.

The Lott-Breaux website adds, as the penultimate sentence in their plan outline, something the Lott-Breaux Times op-ed conveniently omits: “Robust carbon taxes would also make possible an end to federal and state tort liability for emitters.” (The Climate Leadership Council calls for the same outcome in one of its documents and a more vague prescription in another.) That gentle formulation seems to mean this: The plan proponents are insisting that a solution must bar everyone and anyone from suing fossil fuel companies for the harms done by global warming — past, present, and future.

You might be aware by now that some thirteen cities and counties in the states of California, Colorado, New York, and Washington have recently sued major fossil fuel companies over alleged harms from emissions — coastal erosion, floods, wildfires, drought, floods, and other effects of climate change.

These new lawsuits could pack a powerful punch. They allege that ExxonMobil, Chevron, ConocoPhillips, BP, Royal Dutch Shell, and others knew for decades that fossil fuel-driven global warming and rising seas threatened human life, but continued to expand their production, while deceiving consumers about the risks. Asserting that this conduct violates various state tort rules — public nuisance, failure to warn, design defect, negligence, trespass, conspiracy — the suits demand that the companies, rather than taxpayers, cover the costs of the environmental harms.

Prior lawsuits using similar theories, brought a decade or more ago, were dismissed. But today there is much more evidence that global warming is real, accelerating, and caused by burning fossil fuels, and that oil companies knew such information, suppressed it, and sought to counter it. Also, lawyers for cities and counties believe that recent scientific advances will make it easier to prove that the specific defendants’ activities harmed or threaten their client communities.

Which is why the big oil companies are scared. They face potentially billions in liability, plus the likelihood that protracted litigation will disclose new internal company records and highlight the extensive efforts made by Exxon and other companies over decades to conceal the dangers of fossil fueling burning, and to support fake-science climate denial organizations and politicians.

In addition to seeking to dismiss the cases and keep their company documents hidden, the oil companies have resorted to filing desperate countersuits claiming that the cities, as well as the Massachusetts and New York state attorneys generals, plus private lawyers, are engaged in conspiracies to violate their constitutional rights. These efforts are succeeding in delaying and wasting money, but they are unlikely to wipe out the threat the suits pose.

So the fossil fuel companies want badly to get rid of these cases. And now, they have joined hands with Lott and Breaux for a comprehensive climate change solution, one that would let them off the hook for enormous potential liability for past and ongoing harms. (The case law is not entirely settled as to whether a federal ban on liability would conclusively bar all such state tort law suits, given the constitutional due process rights of those injured, but for the fossil fuel industries, it’s certainly worth a try.)

The effort includes some deceptions already. Linked to a page on the Lott-Breaux campaign site called “Who Supports” is a June 20 statement from the pro-environment Union of Concerned Scientists. But that UCS statement, while praising the concept of a carbon tax, expressly opposes key elements of the new Lott-Bureaux package: the trading away of government regulations and the rights of municipalities to obtain compensation for climate change harms. The statement concludes: “Taking away legal rights and rolling back public health safeguards are clearly not in the American public’s interest.”

In addition to overstating support for the plan and soft-pedaling the oil companies’ demand for immunity from ongoing lawsuits, Lott, Breaux, and company aren’t offering all the details of the financial incentives behind the new coalition.

Ted Halstead, CEO of the Climate Leadership Council, the partner group to the new Lott-Breaux effort, told the New York Times that his group, which includes as members Exxon, Shell, BP, Total, and other big companies inside and outside of the energy sector, did not accept corporate contributions.

But given the New York Times’ enhanced policy of disclosure of conflicts of interest by op-ed writers, the two former senators were compelled to mention that Americans for Carbon Dividends “has hired” their law firm, DC lobbying powerhouse Squire Patton Boggs, “to help with the campaign,” which they call “a multifaceted media and lobbying campaign to promote this winning solution.”  That means that, however sincerely Trent Lott and John Breaux believe in this cause, they are not acting merely as elder statesmen; they also are getting paid to advance it, just as they have been paid for years to lobby for oil companies, health care companies, for-profit colleges, Russian government-owned Gazprombank, tech companies, and other special interests. In the case of this new campaign, we don’t know how much money they’re getting, or where it’s all coming from.

As a 501(c)(4) nonprofit, Americans for Carbon Dividends is not required to disclose its donors, but Axios reports that funders so far include nuclear-power giant Exelon ($1 million), First Solar, and the American Wind Energy Association.  “Other corporate donors exist,” writes Axios, “but are opting not to disclose…. No oil and gas companies are funding the effort yet, but they’re likely to in the coming months, according to a source familiar with the effort.”

Lott, one of the swampiest lobbyists in the DC swamp, knows well how to play this game. He is also a senior fellow and energy policy project co-chair at a DC think-tank called the Bipartisan Policy Center, which also has styled itself as presenting sensible non-partisan answers to difficult problems, but which has tilted its positions in favor of fossil fuel industries and has accepted funding from numerous companies in those industries.

Given the urgent need to fight climate change, and the Trump administration’s outright hostility to addressing the problem, advocates for a carbon tax, including Republicans, deserve credit for seeking a bold solution. But tying the approach to an end to legitimate claims by cities and counties that they have been harmed by global warming, as Lott and Breaux seek, is asking way too much. As the debate goes forward, advocates for taxpayers, consumers, and the environment should guard against including in any deal a grant of immunity to the fossil fuel industries for decades of climate change deception.