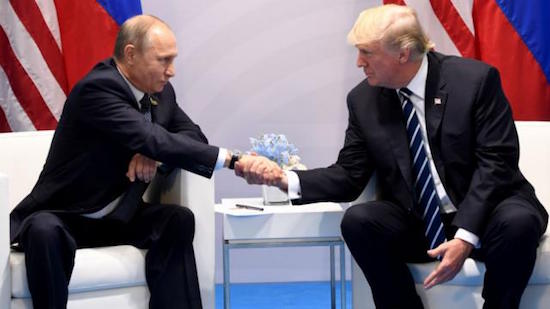 Washington’s upheaval of the hour is about Donald Trump, against the directions of his advisers, congratulating Vladimir Putin on his election victory in Russia. Trump’s action seems like a disgrace, given that Putin rigged the Russian election, interfered in the U.S. election, poisoned two exiled Russians in Britain, invaded Ukraine, etc., and given Trump’s general failure to call out or stand up to Putin.

But, don’t worry. This latest bow to the Russian autocrat is in fact a master diplomatic move by stable genius President Trump. We know this because Trump has learned a key trick in his career as a con artist: when you’re trying to manipulate someone, there’s always one word to say — Congratulations!

Throughout the Trump playbook, the script for luring suckers and overcoming their objections always returns to that word: Congratulations!

Trump doesn’t congratulate people only when he’s trying to sell them phony universities, condos in abandoned buildings, golf memberships, or premium Virginia wines. He also does it when he encounters people who might be upset with him, and he wants to try to get them on his side. When he meets the battered victims of Maria in Puerto Rico, when he visits Parkland shooting survivors at the hospital, what does he say? Congratulations!

So no doubt congratulating Putin on his sham election is the first step to getting Putin to withdraw from Ukraine, stop poisoning people, dismantle his nuclear weapons, and, eventually, enroll at Trump University.