posted at 3:51 pm by David Halperin 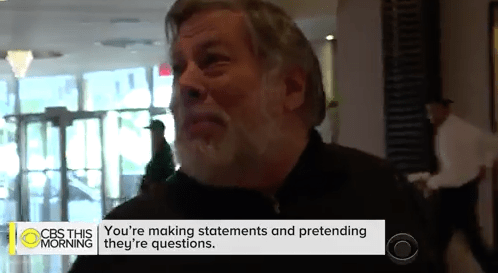 The net is buzzing over a CBS News investigative report this morning about Woz U, the coding bootcamp fronted by Apple co-founder Steve Wozniak. CBS says it interviewed more than two dozen current and former Woz U students and employees, who spoke of poor quality programs and a culture of relentless high-pressure recruiting.

But one point in the report raises particular concerns about Woz U’s status and legal compliance. The CBS reporter says,  “The 33-week program wasn’t cheap at $13,200 – including more than $7,000 in federal student loans,” and the report then shows an image of “direct” loans, a term that refers to taxpayer-supported federal student loans.

But Woz U, is at acknowledges in its catalogue, “is an unaccredited school and is not eligible for federal financial aid programs.” So if students are in fact using federal student loans at Woz U, how is that happening?

Republic Report published two articles in May about the troubling ties between Woz U and two institutions that are eligible for federal student aid: non-profit Dream Center Education Holdings, new operators of the Art Institutes, and for-profit Southern Careers Institute. All three institutions are connected to Brent Richardson, current CEO of DCEH and former CEO of Grand Canyon University.

We reported that a “Woz U Online Financial Aid Checklist” posted on the SCI website seems to tell Woz U students to complete a federal financial aid application and submit it to SCI. At the bottom of the checklist, it says, “Woz U Online is powered by Southern Careers Institute.” An employee told me that Woz U is “piggybacking off SCI for accreditation.” At least some of the students who sign up with Woz U recruiters are technically enrolled at SCI.

Woz U operates a ground campus in Arizona. SCI is not licensed to operate schools in Arizona.

A friend of Wozniak’s told me he did not know how the student in the CBS piece, Navy veteran Bill Duerr, was able to get financial aid, if in fact he did. But he explained, “Woz U offers curriculum, and contracted adjunct faculty, to any one who wants to use it” — major universities, businesses, K-12 systems. In that sense, the Wozniak friend said, Woz U is comparable to education providers like Pearson. So to whom did Duerr pay tuition? “He paid it to Woz U; how he financed it is another matter. He could have gone through a university that is partnering with Woz U…. He gets a certificate from Woz U, but his degree and credits are run through another university.”

The Wozniak friend sent me a two-page response that Woz U president Chris Coleman provided in response to the CBS reporter’s questions, in which he denied there were high-pressure sales tactics. The response from Coleman shows that CBS also asked about financial aid eligibility, although it did not address that issue in the piece.  Coleman responded as follows:

WOZ U’s Arizona approved school does not provide [federal] Title IV to students who enroll. As an education … service company we do have partners who can offer title iv to their students through programs powered by WOZ U content that they have received approval through their accreditors.

Whether this arrangement stands up to legal scrutiny, I don’t know. There’s not much reason to believe that Betsy DeVos’s Department of Education, whose latest outrage is a major step toward reinstatement of ACICS, the notoriously asleep-at-the-switch accreditor of numerous predatory for-profit colleges, will look into this matter.

We reported back in May, based on interviews with Woz U employees, that Woz U’s CEO is Jacob Mayhew, who is also the CEO of Southern Careers Institute. These employees said Mayhew is relentlessly focused on numbers. Mayhew told staff worried about admitted unqualified students: if they fail, they fail. A Woz U employee said the coder bootcamp has been “herding students like cattle and just trying to get everybody’s money.” Another employee echoed that description: “They need butts in seats for class.”

A Woz U employee told me the whole environment has been “really unethical there.” He said recruiters have used coercive techniques common to for-profit colleges — for example, asking prospective students to imagine their children living in poverty unless they turned their lives around through the Woz U program. Some recruiters misrepresent to students what Woz U programs will teach them.

The employee said that as recruiting tactics have become more predatory, the demographic of the coding school, especially for online students, has moved closer to that of predatory for-profit schools —  low-income, struggling for money, people of color, especially African-Americans.

In the CBS report, student Bill Duerr says on camera that Woz U’s supposedly live lectures are pre-recorded and out of date and that designated student “mentors” are unqualified.  “I feel like this is a $13,000 e-book,” Duerr told CBS. “It’s broken, it’s not working in places, lots of times there’s just hyperlinks to Microsoft documents, to Wikipedia.”

The report also featured an interview with a former Woz U recruiter named Tim Mionske, who said the Woz U culture was “drive, drive, drive the sales.”

The Wozniak friend said the CBS report was based on accounts from “disgruntled people who are lying through their teeth.” He added, “This is fake news at its best. This is why Trump got elected.”

The Wozniak friend also said the school is doing so well it doesn’t need to press anyone to enroll.

Woz U and DCEH have not responded to my request for comment on the financial aid issue.

Wozniak avoided a CBS interview but emailed Business Insider today, in response to the CBS story, “I’m not involved in any operations aspects so I can’t answer your questions.”