Who’s Lobbying for For-Profit Colleges in the Trump-DeVos Era? 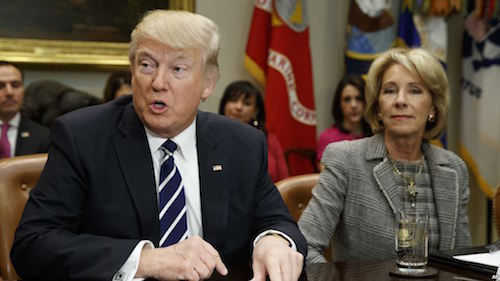 Now that former Trump University pitchman Donald Trump is the President of the United States, his Secretary of Education, Betsy DeVos, appears ready to gut the efforts made by the Obama Administration to hold for-profit colleges accountable for engaging in the same kind of deceptive, predatory behavior exhibited by Trump’s real estate “school.” A for-profit college industry that was in despair, after its hyper-aggressive lobbying strategy ultimately failed in the Obama era, has been miraculously rescued by the election of a president who promised to stand up for the forgotten man and woman but instead, on issue after issue, is standing with wealthy barons who prey on struggling Americans.

And now, the disgraceful for-profit college industry is gearing up to spend more money — to spend your tax dollars, since many industry players get 80 to 90 percent of their revenue from federal aid — not on teaching, but on lobbying to make sure it gets everything it wants from the Trump years. Of course, high-priced Washington lobbyists, Republicans and, to the extent they are needed, Democrats, are ready to answer the call. Senator Dick Durbin (D-IL) once said that the for-profit colleges  “own every lobbyist in town,” and it appears this industry still strives for that goal.

Here’s the rundown of some of who’s lobbying for whom (per the latest congressional lobby disclosure forms):

Former Congressman Steve Gunderson (R-WI) spectacularly mismanaged the strategy of the national for-profit college trade association CECU, keeping in the fold member schools even after they were exposed as systematic frauds, and eventually losing the policy and public relations battle and losing numerous members.  In the wake of the debacle, Gunderson has abandoned his unquestioning boosterism and has been trying a more confessional approach: admitting that for-profit schools “grew too much, too fast,” even acknowledging in private discussions that these schools focused on signing up students sometimes without regard to the students’ capacity to succeed in a program.

But now, Gunderson claims, the for-profit college industry is completely healed and is non-stop focusing on programs that actually train students for careers. Yet, although predatory companies like Corinthian, ITT Tech, FastTrain, and ATI are no longer part of CECU, because they went out of business under the weight of fraud investigations,  Gunderson’s membership roster still includes such predatory companies as: CollegeAmerica, currently being sued for fraud by the U.S. Justice Department and the state of Colorado; Daymar College, which in 2015 paid $12.4 million to settle charges by Kentucky’s attorney general that it engaged in deceptive practices; Lincoln Tech, which in 2015 paid $1 million to settle claims by the Massachusetts attorney general that it inflated job placement numbers and employed unfair recruiting tactics; and Globe University, which the U.S. Department of Education cut off from student aid last year after a Minnesota court ruled that the company had used deceptive practices.

When Members of Congress, representatives of legitimate higher education groups, and others, meet with Gunderson, they should keep in mind that he still represents such fraudulent enterprises.

Last week a new lobbying firm registered to represent CECU: the powerhouse Podesta Group. Started by Democrats, Podesta is now heavily stocked with Republicans, including Lauren Maddox, who formerly lobbied for CECU and for-profit Career Education Corp. and this year helped shepherd DeVos through her shaky confirmation hearing. But now it appears that CECU has re-engaged Podesta to try to deliver some Democrats back into the for-profit fold.  The Podesta lobbyists hired this time include Dana Thompson, former chief counsel to Rep. Maxine Waters (D-CA), and Oscar Ramirez, former top aide to Obama Secretary of Labor, and before that congresswoman, Hilda Solis (D-CA).

Gunderson and others in his industry have consistently argued that taxpayers should be forced to fund for-profit colleges because they cater to what they call “minority” students, conveniently missing the point that there’s a difference between genuinely educating students of color and simply enrolling them in overpriced, low-quality programs that instead ruin their financial futures.  Fortunately, Rep. Waters, one of the leaders in the fight to protect students and taxpayers from predatory colleges, is unlikely to be swayed by these kinds of arguments, and neither will others in Congress who have put conscience over campaign contributions when it comes to this issue.

The Podesta lobbyists join a CECU lobby team that already includes Kimberly Dorgan of Signal Group Consulting Group (who got $50,000 from CECU in the first three months of 2017) and former congressman Henry Bonilla (R-TX) ($30,000).  Inside CECU, Gunderson has Michael Dakduk, Executive Vice President and Director of Government Relations, who leveraged his stint as head of Student Veterans of America, tilting that group to favor for-profits, to get the CECU job. (SVA now has strong, principled leadership and fights to protect veterans from predatory schools.)

The University of Phoenix

The largest for-profit college, the University of Phoenix, is now under new private equity ownership, but much of its prior lobbying team remains involved. Democrat Alfred Mottur and his team at Brownstein Hyatt got $40,000 last quarter from Phoenix’s operator, Apollo Education Group, and another $280,000 from various components of Apollo Global Management, one of Apollo Education’s new owners. Democrat Steve Elmendorf, who runs the lobby firm Subject Matter, got another $50,000 from Apollo Education, while Crossroads Strategies, which includes Jake Perry, a former “senior political advisor and confidante” to ex-Senate Democratic leader Harry Reid (D-NV), got another $50,000, and Penn Hill Group, which includes Alex Nock, a former Democratic deputy staff director of the U.S. House Committee on Education and Labor under Representative George Miller (D-CA), got $40,000. (The same Penn Hill team also lobbies for for-profit Laureate Education – $20,000 in the same period.)  The company also reports $310,000 for the last quarter in in-house lobbying, with staffers Joanna Acocella and Conwey Casillas listed.

In recent years, the University of Phoenix, which has been getting some $2 billion a year from taxpayers, has been under investigation by the U.S. Department of Education, Department of Defense, Federal Trade Commission, Consumer Financial Protection Bureau, Securities and Exchange Commission, and the attorneys general of California, Delaware, Florida, and Massachusetts.

Bridgepoint, getting about $640 million a year from taxpayers, last summer beefed up its lobby team by adding former Senate Majority Leader Bob Dole (R-KS) and his team from Alston & Bird ($50,000 for the first quarter of 2017).

Bridgepoint has been under investigation for fraud and other abuses by four federal agencies and five state attorneys general.

Other lobby firms that continue to represent Bridgepoint are the big national law firm Holland & Knight ($30,000), including lawyers Paul Bock, who was chief of staff for Senator Herb Kohl (D-WI), and Richard Gold, who worked in the Clinton administration; and Fierce Government Relations ($60,000), including Kirk Blalock, a White House aide to George W. Bush. Bridgepoint also reported $150,000 worth of lobbyist expenses in-house, listing lobbyist Jeffrey Pannozzo.

But Bridgepoint has one more key in-house presence — inside the Department of Education.  Robert Eitel, who initially joined Betsy DeVos’s team at the Department while taking an unpaid leave of absence as vice president for regulatory legal services at Bridgepoint, is playing a major role on for-profit college issues, having formally recused himself from some matters, but not all.

Before working at Bridgepoint, Robert Eitel was at Career Education Corp., whose current outside lobbying ($30,000 last quarter) is handled by Tony Guida of the law firm Duane Morris. Guida was previously in-house at predatory, now-collapsed Corinthian Colleges, and before that predatory EDMC.

Registered lobbyists for DeVry include Kenneth Salomon of Thompson Coburn ($60,000), Randy Nuckolls of the firm Dentons US ($30,000), and Moises Vela Jr. ($25,500), who formerly worked in the White House for Vice President Joe Biden.  (Heather Podesta + Partners received $1,390,000 from DeVry for lobbying between 2010 and the termination of the relationship in mid-2015.)

Devry, which has been getting nearly $1.5 billion annually from taxpayers, has in recent years been under investigation by the Federal Trade Commission, U.S. Department of Education, and the attorneys general of Illinois, Massachusetts, and New York.

With Keiser University head Arthur Keiser, long a dominant figure in CECU, now somehow the chair of the Department of Education’s advisory committee on accreditation, despite his school’s troubling record, the school has brought on a new lobbying team, to supplement its long-time outside lobbyist Terrence C. Wolfe ($15,000 last quarter). Keiser’s new lobbyists, registered last week, are none other than The McKeon Group, headed by former congressman Howard P. “Buck” McKeon (R-CA), who as chairman of the House education committee worked to block measures to hold predatory colleges accountable, as he accepted campaign contributions from the industry and even owned shares in Corinthian Colleges. It’s not disclosed yet what McKeon will get paid to lobby for the industry he once protected as a lawmaker, but Keiser University has been getting at least 86 percent of its $390 million annual revenue from U.S. taxpayers, so it’s good to know we’re still supporting McKeon to do Keiser’s bidding.

Kaplan, which earlier this year proposed a dubious plan to be purchased by Purdue University, continues to rely on in-house lobbyist Rebecca Campoverde and reported $70,000 in expenditures in the first-quarter. Donald Graham, chair of Kaplan’s parent, Graham Holdings, has been Kaplan’s dominant lobbyist, leveraging his relationships and status as the once-owner of the Washington Post newspaper to press against college accountability measures, and lately to build support for the troubling Purdue deal.

Kaplan has been getting some $875 million a year from U.S. taxpayers. In recent years, it’s been under investigation by the U.S. Department of Justice; U.S. Department of Education; and the attorneys general of Delaware, Florida, Illinois, Massachusetts, and North Carolina.

This accounting represents just some of the major players in the industry; there are more companies engaged in lobbying.  And none of the lobbying disclosure information covers the names and fees of strategic advisors, public relations experts, lawyers, celebrity endorsers, and other non-lobbyist lobbyists paid by the industry to try to influence the outcome of the fight. So the total bill for this activity — pressuring DeVos and Congress to step up efforts to unleash predatory college abuses — is hard to calculate.  What is clear, given that many for-profit colleges get most of their money from federal dollars, is that you’re paying for it.

I also would be curious to know what has motivated ex-congressman Allen West (R-FL) to write a vehement attack on critics of predatory colleges, entitled “Obama’s Progressive Socialist Attempt to Destroy Private College Education in America,” for the conservative website TownHall.com — and what motivated West or Town Hall to revise the piece later the same day. Hard to tell if my tweet about a false and defamatory passage in the original version — see below — was a factor in shaping the feeble revision, further below. 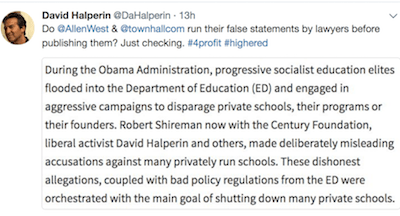 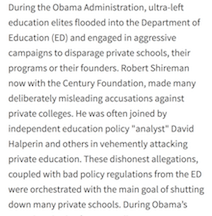