posted at 4:06 pm by David Halperin 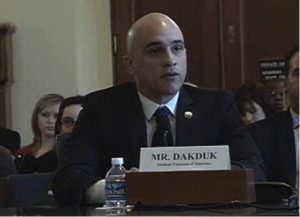 The lobbying group of America’s for-profit colleges, APSCU, announced today that Michael Dakduk is its new Vice President of Military and Veterans Affairs. Dakduk had just left the job of executive director of the Student Veterans of America (SVA). You heard that right.

SVA’s stated mission is “To provide military veterans with the resources, support, and advocacy needed to succeed in higher education and following graduation.” Meanwhile, the public record shows that many for-profit colleges deceive and abuse veterans, luring them into high-priced, low-quality programs and leaving them deep in debt and without improved job prospects.

President Obama said in August, “Soldiers and sailors and Marines and Coast Guardsmen, they’ve been preyed upon very badly by some of these for-profit institutions.” The Federal Trade Commission warned veterans last week that some for-profit colleges “lie about how well their graduates fare.”  The respected organization Iraq and Afghanistan Veterans of America said in August, “Using high-pressure sales tactics and false promises, these institutions lure veterans into enrolling into expensive programs, drain their Post-9/11 GI Bill education benefits, and sign up for tens of thousands of dollars in loans. The for-profits take in the money but leave the students with a substandard education, heavy student loan debt, non-transferable credits, worthless degrees or no degrees at all.”

Yet as the head of the SVA, a group charged with protecting student veterans, “Dakduk often opted not to take a hard line against the for-profit industry,” as Stars and Stripes put it today, mildly. There have been many opportunities in the past few years for veterans groups to weigh in on for-profit college issues, and other groups representing young veterans, such as IAVA, have taken a principled, strong stand against the abuses of this industry. Dakduk, while at SVA, mostly did not. While his board of directors issued a resolution seeking greater protections from predatory institutions, Dakduk’s own statements were muted. Meanwhile, he served on APSCU’s “Blue Ribbon Taskforce for Military and Veterans Education” and flew to Orlando this summer to speak at the APSCU convention.

The for-profit colleges have been raking in about $33 billion a year in taxpayer money — for many of the bigger industry players, 85-90 percent of their revenue.  Many spend little on actual education, but in addition to marketing and high salaries for top executives, they set aside some cash to buy the support of Members of Congress, connected former officials, non-profit advocacy groups, respected education leaders, and others.

We know that APSCU has no shame. They keep discredited colleges and college owners in their membership ranks and on their task forces. They pressure Congress and the Administration to block reasonable rules to hold bad actors accountable for waste, fraud, and abuse, and then hire expensive lawyers to sue if they don’t get everything they want.

But what about Michael Dakduk?

An official with a major national veterans organization told me today, “I’m sad. It has been became apparent that somehow Michael was flirting these people, because his attitude shifted in the past year, and that’s why he left. I’m sad because he served honorably and he had a lot of talent.  It’s always sad when someone goes over to the dark side.” He continued, “I don’t know what they’re paying him. It’s not enough to sell his soul.”

Of the for-profit colleges, this official said, “They are nothing short of war profiteers of the worst order. They are taking the valor of young people who put their faith in the VA, and their future is burned up, and their eligibility for GI Bill money is used up, so they cannot go to a real college.”

The potentially good news is that, with Dakduk gone, Student Veterans of America has the opportunity to restore its place as a strong, principled advocate for vets. Let’s see what they do.

Brian Hawthorne ‏of the SVA board of directors posted on Facebook:

Mike and APSCU will have no more access to SVA than any other organization that wants to help vets succeed at their chosen institution. While I am always professionally skeptical about any institution that must answer to shareholders and investors before students and customers, I know many student vets (including myself and our new President/CEO Wayne Robinson) have had completely normal experiences at for-profit schools. Michael Dakduk now has an opportunity to prove to the entire community that he is on the side of student veterans, not the for profit schools paying his salary, and I wish him the best of luck in that inherent, but not absolute, conflict of interest. I truly hope that APSCU, with its new employee, with vigorously pursue quality education over profit and share price, and everyone should know that the veteran community, especially SVA, will be looking for improved outcomes, significant investments into students, and leadership on many issues, and not more of the same.

And a few minutes ago, SVA’s new executive director, D. Wayne Robinson, issued a statement, expressing confidence that Dakduk “will continue to serve the veteran community with the same passion and integrity he demonstrated during his tenure with SVA,” but also stressing that “[t]o ensure the organization’s own transparency and accountability, SVA does not accept donations, grants, or any sort of financial incentive from for-profit institutions.”