posted at 8:25 am by David Halperin 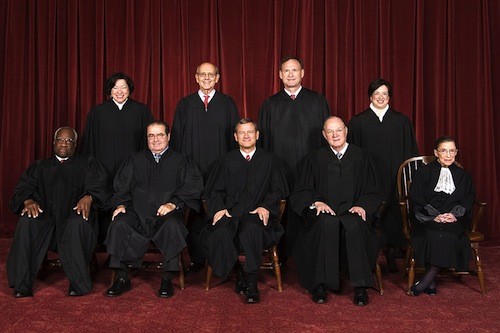 Apparently for the first time ever, the U.S. Supreme Court last night, by a 5-4 vote, blocked a federal regulation from taking effect while that rule was still up for review in a federal appeals court.

The unprecedented maneuver by the Court’s five-Justice conservative majority stays implementation of the Obama Administration’s Clean Power Plan. That rule, issued last August by the U.S. Environmental Protection Agency, directs states to significantly scale back emissions of greenhouse gases from electric power plants. The regulation, a centerpiece of President Obama’s strategy to fight global warming and toxic pollution, would push utilities away from coal and toward alternative sources of energy.

Last month, a three-judge panel of the U.S. Court of Appeals in Washington unanimously rejected the plea of 29 states and a large group of energy companies to delay the rule pending that court’s final decision. The appeals court, though, had agreed to prioritize the case on its docket and hear arguments on June 2.

Not satisfied with that expedited schedule, the five Justices reached down and took sides in a regulatory dispute that a lower court was still considering. That just hasn’t happened before.

Big energy companies, who continue to put their profit targets ahead of the urgency of finding a solution to catastrophic climate change, could not contain their glee.  “There’s a lot of people who are celebrating,” Jeff Holmstead, an industry lawyer at Bracewell & Giuliani told the New York Times.

I hope these lawyers, lobbyists, and energy CEOs enjoyed their oysters last night, because if they prevail in this matter, there may not be many left soon.

Had the Supreme Court not acted, each state would have been required to provide the EPA by September 6 a plan to comply with the regulations, or to request a two-year extension.  The rule requires lower emissions starting in 2022, with further gradual reductions through 2030.

In considering a temporary stay pending the outcome of a lawsuit, a court is required to weigh both (1) the likelihood that the parties who sued will win the case and (2) the balance of harms of ruling one way or the other on a stay until the case is resolved.  Since the harm in delaying the rule here was the slowing of efforts to stop global climate change, just as the National Oceanic and Atmospheric Administration reported that 2015 was by far the hottest year on record, versus requiring the states to submit plans and the energy industries to do some planning themselves, the plaintiffs didn’t have a particularly strong argument.

So it seems there’s a good chance that the five-Justice majority, which is generally skeptical of efforts to regulate business, just doesn’t like the Clean Power Plan on its merits. Those same Justices, all Republican appointees, last year joined forces to reject, also by a 5-4 vote, an Obama EPA rule limiting mercury and other toxic emissions from power plants. The Court sent that rule back to the D.C. appeals court for further consideration of whether the EPA had adequately considered the economic costs of the rule.

Once the Court of Appeals is done with the case, the Supreme Court could similarly send this rule back for more explanation or fine-tuning, perhaps dooming it if Obama’s successor does not share his concerns about climate change. As Joe Romm of ThinkProgress has explained, derailing the rule as onerously constructed is unwarranted; as Bush EPA head Christine Todd Whitman told Romm, the rule gives states and utilities broad flexibility to meet its standards.

The Court alternatively could decide that the EPA doesn’t have the authority at all to regulate power plants in this way, but that would fly in the face of previous decisions.

All of this legal resistance by some states and sectors of the energy industry fly in the face of market realities: The coal industry is in sharp decline, and smart, foresighted energy companies were already preparing for a shift to more renewable energy.

Still, if the courts ultimately reject the power plant rule, that could jeopardize progress on the global climate change deal reached last December in Paris. Which is what the big energy companies fueling the legal challenge are, of course, hoping. With this Supreme Court lineup in place, they may get their well-financed wish.