posted at 1:04 pm by David Halperin 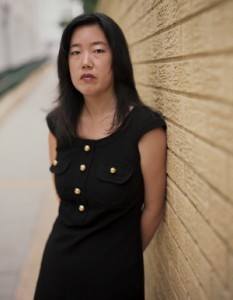 Rhee’s record as chancellor, pushing public charter schools and private school vouchers, and aggressively fighting against the D.C. teachers’ union, brought her to national attention, and won her fervent admirers and detractors, as well as an infamous Time magazine cover.

Little known, however, is Rhee’s interaction with the controversial for-profit college industry.

This industry’s record, and efforts to hold it accountable for abuses, have been at the forefront of education policy debates in the Obama years. The next Secretary of Education will be faced with the fundamental question of whether to continue efforts to improve protections for students and taxpayers, or instead to accede to demands to reverse course — demands from big for-profit colleges and from some Republicans on Capitol Hill like incoming House education committee chair Virginia Foxx (R-NC), a long-time recipient of industry campaign contributions.

In June 2012, Michelle Rhee addressed the Las Vegas annual convention of APSCU (now called CECU), the largest for-profit college trade association. In advance of her speech, Republic Report expressed concern that, unless Rhee used the opportunity to sharply criticize her hosts, her appearance would look like an endorsement of an industry where many schools offered a toxic mix of deceptive recruiting, high prices, and weak programs, leaving many students — veterans, single parents, and others — jobless and deep in debt. At the time, the industry was getting $32 billion a year in federal taxpayer aid but was being investigated for fraudulent practices by a bipartisan group of more than 20 state attorneys general.

Rhee responded with an article in The Huffington Post asserting that she indeed was “willing to tell [the APSCU attendees] the hard truths they need to hear” — that “many” for-profit schools have “poor records.” That the “problem” with the for-profit college sector “is that too many of its schools are failing students, and no one is being held accountable.” She said he would “tell the for-profit colleges that they need to do a better job of making sure their students are getting a good education, are graduating with meaningful degrees, and are able to do so without being saddled with unreasonable debt.” And if a school is “failing,” then “it should be shut down.” Rhee wrote that “Some of these schools seem to be engaged in downright malicious behavior, cravenly taking advantage of students.” She cited an investigation by the Government Accountability Office that documented repeated cases of deceptive recruiting by for-profit colleges. And she praised the “gainful employment” rule issued by the Obama Administration to hold schools accountable for consistently leaving students deep in debt — a rule that APSCU and its member schools have waged a ferocious lobbying campaign against.

Republic Report praised that response, but we wanted to make clear to Rhee that the bad actors she was describing were not some fly-by-night schools in a strip mall someplace — they were (and still are) many of the major enterprises that make up APSCU. We urged Rhee to look attendees in the eye when she told those hard truths.

The Leadership Conference on Civil and Human Rights, the nation’s largest coalition of civil rights organizations, sent Rhee a letter in advance of the speech expressing disappointment that she had agreed to speak at APSCU. (The letter quoted one of my articles for Republic Report.)

APSCU refused to allow Republic Report to cover its Las Vegas meeting,  but we were able to obtain an audio recording of Michelle Rhee’s remarks. You can listen for yourself, but we didn’t hear the kind of frank criticism she had promised. (The first 25 minutes are mostly about her experiences with public K-12 schools, but after that she addresses the for-profits.) Instead, in her prepared remarks, and in a Q&A with APSCU bosses Art Keiser, CEO of Keiser University, and David Pauldine, then the president of DeVry University, Rhee soft-pedaled any concerns she might have had.

Rhee said that there were for-profit colleges in the room “doing incredible work.” She said that such schools should seek to ensure that lower-performing schools do better. She asked the schools who “aren’t where they need to be” in terms of performance to “work harder, knowing what’s at stake.” Rhee did say that “we all lose when we allow people who are not doing right by our students to continue to operate.” But she said that colleges should set high goals for graduation rates but seek “apples to apples” comparisons for accountability — which echoed APSCU’s own talking point that the low graduation rate of many of its members is acceptable given the many low-income students who enroll. Although she claimed in her article to support the Obama Administration’s gainful employment rule, Rhee did not urge APSCU to drop its opposition to that rule — or its pending lawsuit against it. Nor did she ask APSCU to drop its objections to President Obama’s executive order aimed at protecting U.S. troops and veterans from predatory recruiting practices by for-profit schools. Nor did she tell them that some for-profits are engaged in “downright malicious behavior.”

The APSCU group that Rhee addressed has included many of the industry’s most troubled companies, such as the now-shuttered Corinthian Colleges and ITT Tech, as well as Education Management Corporation, Kaplan, Career Education Corporation, DeVry and Bridgepoint Education, all of which have since faced law enforcement investigations for deceptive business practices and other misconduct. APSCU also included ATI, which was shut down by the Justice Department in 2013 for systematic fraud, and FastTrain College, whose CEO was sentenced to eight years in prison in May 2016 for defrauding the government.

Four years after Rhee’s APSCU appearance, APSCU, and indeed much of the for-profit college industry, are in freefall.  The industry has seen its enrollments plummet, and its companies now collectively face investigations from 37 state attorneys general and multiple federal law enforcement agencies.  It is still, however, getting some $20 million a year in taxpayer money, and the many predatory companies remaining in the sector continue to enroll students and ruin their lives.

Notwithstanding his own troubling interlude running the unaccredited Trump University (which did not take taxpayer money), a President Trump who is truly committed to fighting against waste, fraud, and abuse with taxpayer dollars needs an Education Secretary who will continue the efforts to hold predatory for-profit colleges accountable for misleading, overcharging, and under-educating students.

Michelle Rhee seems to be in that vein in terms of K-12 education: She has built her career on the concept of shutting down underperforming, bad schools. Yet when it came to the for-profit college industry, she went to Las Vegas, got paid to address a room full of operators of such schools, soft-pedaled her concerns, and instead offered praise. As Secretary, faced with relentless lobbying by for-profit colleges and their paid allies on Capitol Hill, which course would Rhee take?