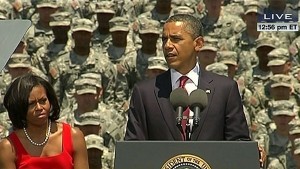 Standing before soldiers at Fort Stewart, Georgia, last month, President Obama signed an executive order to protect U.S. troops, veterans, and their families from predatory abuses by some for-profit colleges. Obama delivered powerful remarks, charging that such for-profit schools “aren’t interested in helping you…. They are interested in getting the money.” He called the schools’ conduct “disgraceful” and told the troops that these schools are “trying to swindle and hoodwink you.” Obama stood up for fiscal responsibility, honest government, and economic opportunity. More to the point, he stood with the men and women of our armed forces.

Obama’s action frightened the big for-profit education companies, which see the military as the goose that lays many of their golden eggs. For-profit colleges received half of all military Tuition Assistance dollars last year — $280 million out of $563 million for college grants for active duty military. Eight of the top ten recipients of Post 9/11-G.I. Bill veterans education benefits are for-profit higher education companies. Federal law prohibits colleges from receiving more than 90 percent of their revenues from federal aid, on the theory that schools that cannot get anyone to fork over any of their own money shouldn’t be in business. But that “90-10” rule only covers Department of Education aid; federal military benefits can make up the rest, thus making our troops fertile ground for aggressive for-profit college recruiters. During their decade of explosive growth, for-profit education companies have sent armies of high-pressure recruiters to military bases and set up makeshift campuses right nearby.

So the for-profit colleges’ most loyal allies swung into action. The Republican leadership of the U.S. House of Representatives consistently does the bidding of these predatory colleges — even helps them map out legislative strategy to avoid accountability for their abuses — and in turn is richly rewarded with campaign donations. House Veterans Affairs Committee chairman Rep. Jeff Miller (R-FL) immediately denounced Obama’s order as “imperial fiat” and “an unnecessary attack on the free market” (a ridiculous assertion given that taxpayer dollars fuel the sector, and the government thus has an obligation to prevent waste, fraud, and abuse with our money).

Rep. Miller’s committee also launched plans to hold a hearing, where presumably he would renew his attack on the President’s audacious assertion of authority and demonstrate once again his caucus’s fealty to its donors. As Republic Report noted, the for-profit college industry is Miller’s third-largest contributor this election cycle; he’s received support from major industry players including Bridgepoint, DeVry, EDMC, and APSCU itself.  Miller’s sixth biggest donor is Kentucky’s Sullivan University, investigated by a special prosecutor after its executives allegedly told its employees to donate money to and vote for the opponent of the state’s attorney general, who had began probing the school for abuses.

But when the hearing opened last week, it  was not with a bang but a whimper. Chairman Miller was nowhere to be found — the hearing had been downgraded to the small Subcommittee on Economic Opportunity. The representatives of veterans groups who testified — from the Veterans of Foreign Wars, Vietnam Veterans of America, Iraq and Afghanistan Veterans of America, and Student Veterans of America — criticized abuses by for-profit schools and praised Obama’s executive order.  These groups and others — increasingly assertive on these issues — have now formally proposed tightening up the 90-10 rule to add military education aid to the government side of the equation. The GOP congressmen attending the hearing generally refrained from criticizing the order. Some of the for-profits’ most visible and highly-paid outside lobbyists — who have regularly attended Senate hearings on these issues — skipped this one, leaving APSCU to fill seats with a big contingent of its staff, including senior officials Brian Moran and Bruce Leftwich.

Sensing the climate, even Gunderson testified that he was “not sure” if APSCU was opposed to the order — depending on whether it could be appropriately implemented. But Gunderson did engage in one moment of indignation, saying that rather than criticize his member schools, Americans should be “commending” and “congratulating” them for enrolling struggling veterans and other low-income students. This frequently-invoked argument only exposes the callousness of the industry Gunderson represents. It’s easy to sign up vulnerable students, by engaging in coercive recruiting and overpromising success, and then cashing their federal financial aid checks. What’s hard, and what deserves commendation, is actually educating struggling students, preparing them for careers, and helping them find jobs. And that is precisely where many of APSCU’s member schools have been failing or barely even trying, one apparent example being Florida’s FastTrain College, raided by the FBI last week after a fraud investigation.

Gunderson’s brief flash of intensity on behalf of his bosses was lost in a sea of concern about how his industry has been abusing our servicemembers and vets. The political climate had shifted, for once, to match the moral realities. The House GOP attempt to please its wealthy donors had completely backfired. The hearing may have even helped make the case for genuine reform to protect students and taxpayers from predatory schools.