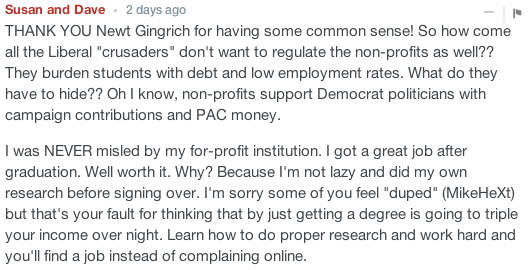 The mess that Corinthian Colleges’ management has left for students, staff, and shareholders might have been avoided had there already been a strong “gainful employment” rule in place. The rule, which the Obama Administration has been seeking to enact for almost five years in the face of fierce lobbying and court challenges by the for-profit college industry, would cut off federal aid to those high-priced, low-quality career education programs that consistently leave students with loans they cannot afford to repay. Previous test runs of the rule showed that Corinthian was one of the worst performers.  With the rule in place, Corinthian would have had several years warning to reform itself before losing aid, instead of the rapid collapse that has now occurred, amid mounting law enforcement investigations of, and public awareness of, fraudulent conduct and bad student outcomes by the company.

The rest of the industry, and its paid defenders in Congress, have now thrown Corinthian under the bus, declining to defend it.  But the trade association APSCU and the other big industry players continue to lobby hard, as Corinthian previously did, to stop the gainful employment rule. And they are enlisting high-profile, connected friends, old and new, to help them keep federal dollars — some $33 billion a year — flowing into their coffers, regardless of the bad consequences for students.

President Obama already has made clear that he understands fully the nature of the scam perpetrated by some of the major for-profit colleges. Still, the industry is focusing its pressure on top White House officials like Valerie Jarrett, hoping an industry onslaught / charm offensive, backed by entreaties from industry-bought Members of Congress, will somehow override the facts and gut the rule.

Until its dying breath, Corinthian was lobbying against the gainful employment rule. New federal disclosure forms released this week show that the company spent $320,000 on lobbying from April through June.  Corinthian spokesman Kent Jenkins told Bloomberg the high spending resulted from, among other things, the company’s continuing efforts to influence policy issues, as well as the effort needed to negotiate with the Department of Education on the terms of the Corinthian’s collapse. That breakdown came amid charges that the company had misled students and withheld information from the Department itself.  (I recently had breakfast with Jenkins and Tony Guida, Corinthian’s executive VP for External Affairs, who came to Corinthian just in March from another troubled for-profit college giant, EDMC — leaving the Titanic for the Hindenburg. Jenkins and Guida are truly nice guys.  Their company has not been so nice to its students.)

Corinthian spent most of the recent lobbying money in-house, but $90,000 was spent on two outside firms, including $60,000 to Akin Gump, whose lobbyists on the case included former Representative Vic Fazio (D-CA), who once referred to Senator Tom Harkin’s investigations of the industry as “jihad,” and Ed Pagano, who served from 2012 to 2014 as one of the President Obama’s top lobbyists on Capitol Hill. Pagano apparently didn’t mind gliding through the revolving door, switching sides, and representing Corinthian, which has fiercely opposed Obama Administration initiatives.

The industry’s roster of friends is truly bipartisan, however. Newt Gingrich, in a new Daily Caller article, is the latest in a long line of public servants and celebrities to publicly attack the gainful employment rule. Presumably this champion of limited government does not really believe in the idea of allowing an industry to take tens of billions in taxpayer money, with no accountability for waste, fraud, and abuse. Either someone in the for-profit college industry is paying long-time influence peddler Gingrich, or misleading him. (UPDATE: I forgot to mention that Gingrich’s wife, Callista, began her career in DC working for her hometown congressman and family friend, Steve Gunderson (R-WI), now the CEO of APSCU.)  Or else Gingrich still thinks he is going to be president, and he sees that White House pretenders from Mitt Romney to, most recently, Jeb Bush, have joined a throng of Capitol Hill politicians, Democrats as well as Republicans, in sucking up to this troubled industry and getting campaign contributions in the process.

Bill Gates, who doesn’t really need anyone else’s money, also praised for-profit colleges this week.  In public remarks, Gates said that because for-profit colleges admit many students who are a challenge to educate, and because of tough regulations already imposed on the industry, the industry has created strong student support mechanisms.”For-profits know within 10 minutes when a student hasn’t gone to class so they can figure out why,” Gates said, according to Inside Higher Ed.

Gates reportedly cited as the source of this information the book Change.edu, by Andrew Rosen.  Rosen is the CEO of the Kaplan chain of for-profit colleges.  Kaplan is owned by Graham Holdings Inc., the corporation that was previously called The Washington Post Company, before it sold its flagship newspaper.

It is remarkable that after 35 years working in the information industries, and with unlimited research resources at his disposal, Gates has concluded that Andy Rosen and Kaplan are a model for 21st century education.

It’s not clear from the article if Gates mentioned in his remarks that his wife, Melinda, was for many years on the board of the company that owns Kaplan. Or that the Bill and Melinda Gates Foundation will ultimately profit immensely from Warren Buffett’s wealth, which was enhanced by a billion dollar investment in that company.  Or that Andy Rosen’s predecessor as CEO of the supposedly lean and efficient Kaplan enterprise, Jonathan Grayer, received a $76 million compensation package when he resigned in November 2008. Or that Kaplan refused a congressional request to disclose Rosen’s salary, despite the fact that Kaplan receives 86 percent of its revenue from taxpayer dollars. Or that Kaplan is under investigation by the attorneys general of Delaware, Illinois, Massachusetts. Or that Kaplan’s Charlotte, NC, campus surrendered its state license to operate a dental assistant program after allegations that campus officials lied to students about the credentials they would earn. Or that last month, Florida’s Republican attorney general, Pam Bondi, resolved her investigation of the company after it agreed to make accurate disclosures to students regarding accreditation, program costs, financial aid, and job placement, and to waive $6 million in tuition and fees to 2,400 students. Or that Kaplan parent Graham Holdings is also the long-time owner of more than five percent of the now-vilified Corinthian Colleges.

Gates’ remarks were dutifully trumpeted by Forbes Magazine, which further reported that Gates added comments that sound very much like for the for-profit college industry’s critique of the gainful employment rule:

He is concerned that the for-profit sector, along with community colleges and some less competitive colleges, may be forced to “cherry pick” better students in order to meet outcomes goals that may come into play as we move towards performance funding. He noted that equal opportunity will be threatened if this happens. He urged us to make sure that we don’t create incentives so that schools do not take the difficult students yet he noted that we need to become much more effective in helping these students succeed.

The Forbes item failed to mention that Forbes itself is now a paid partner of another troubled big for-profit college, Bridgepoint Education. The Forbes account was then picked up by the industry website Career College Central.

Gates’ remarks also were cited by what appears to be public relations hacks posing as ordinary citizens commenting on various websites. “Susan and Dave” wrote, “Even Bill Gates is stepping up and defending for-profits now.” But I don’t think “Susan and Dave” are the hard-working American couple their Disqus handle evokes.  Instead, “Susan and Dave” are likely a PR drone  sitting in an office and charged with pretending to be a hard-working American couple.  But “Susan and Dave” doesn’t seem too worried about getting caught.  In commenting on July 24 on a Bloomberg article about Corinthian, “Susan and Dave” write, “My daughter went to [a for-profit college] and graduated just fine. Got a wonderful job and everything.” But commenting a day earlier on Gingrich’s Daily Caller article, “Susan and Dave” have stopped being the parent of a for-profit college student; now they are the proud student itself: “I was NEVER misled by my for-profit institution. I got a great job after graduation. Well worth it. Why? Because I’m not lazy and did my own research before signing over.”

But these are just bottom feeders in the for-profit college world.  Let’s get to the top: Graham Holdings CEO Don Graham was probably the most influential lobbyist in the industry’s successful effort to gut the gainful employment rule in 2011, and he has come back for more, personally pressuring the Administration and, now, bringing back into the fold an influential liberal lobby firm to plead its case.

The latest federal lobby disclosure forms show that Graham Holdings has re-hired The Raben Group to lobby in Washington. A disclosure form signed on July 18 by Robert Raben, president of the firm, indicates that one of its lobbyists, Joel Packer, has been retained by Graham to lobby on “Higher Education Act reauthorization Gainful Employment regulations.” The Raben Group had represented Kaplan in the previous round of lobbying over the gainful employment rule, which concluded in 2011.

Packer was for many years a lobbyist at the National Education Association, which is now part of a coalition (in which I participate) of civil rights, education, veterans, students, and consumer groups that has been advocating for a strong gainful employment rule.

Raben was an Assistant Attorney General for Legislative Affairs in the Clinton Administration, and the Raben Group, in addition to representing many business interests, has worked for a wide range of progressive organizations, including, on other issues, groups in our coalition urging for-profit college accountability, including the League of United Latin American Citizens and the Mexican American Legal Defense and Educational Fund.

I’ve know Robert Raben for almost 15 years, and I greatly respect his achievements.  He told me he is impressed with Kaplan’s efforts to remedy concerns about the company, and that he is “more than fine” advising them.  But if Kaplan is truly prepared to improve its programs, it doesn’t need to oppose a rule that would penalize only those programs that leave a large number of students with overwhelming debt. A company that plans to serve its students well should welcome such a rule, as it would eventually eliminate unscrupulous and incompetent competitors. The fact that Kaplan, directly and through its membership in APSCU, continues to aggressively oppose reforms to hold bad actors accountable calls into question the company’s real aims.