Obama: For-Profit College Industry “Making Out Like a Bandit” 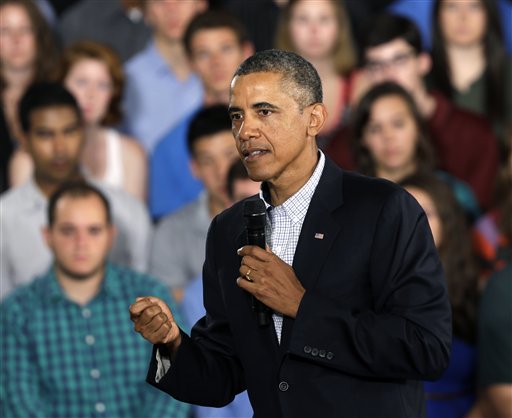 Yesterday President Obama delivered a forceful message to the predatory for-profit college industry. In response to a question at an event Friday at Binghamton University in New York state, Obama said these businesses were “making out like a bandit” preying on veterans and other students, as well as taxpayers. He warned that if these for-profit colleges don’t start training students for careers, they face a cutoff of federal aid.

Obama’s forceful remarks echoed the strong statement he made on this issue last year, standing with soldiers at Fort Stewart, Georgia. This is the kind of strong leadership we need to educate our students and rebuild our economy.

Q    I’m a doctoral student here as well as a writing instructor at Syracuse University.  And I’m interested in the giving of federal funds to students who are going to for-profit colleges — or colleges I might even call predatory.  And I’m very conflicted about this issue and so I’d like to hear your insight.  Thank you.

THE PRESIDENT:  Well, you probably know more about it than I do since you’ve written about it.  But let me describe for the audience what the challenge is.

For-profit institutions in a lot of sectors of our lives obviously is the cornerstone of our economy.  And we want to encourage entrepreneurship and new ideas and new approaches and new ways of doing things.  So I’m not against for-profit institutions, generally.  But what you’re absolutely right about is, is that there have been some schools that are notorious for getting students in, getting a bunch of grant money, having those students take out a lot of loans, making big profits, but having really low graduation rates.  Students aren’t getting what they need to be prepared for a particular field.  They get out of these for-profit schools loaded down with enormous debt.  They can’t find a job.  They default.  The taxpayer ends up holding the bag.  Their credit is ruined, and the for-profit institution is making out like a bandit.  That’s a problem.

I was mentioning veterans earlier.  Soldiers and sailors and Marines and Coast Guardsmen, they’ve been preyed upon very badly by some of these for-profit institutions.  And we actually created a special task force inside our consumer advocate protection organization that we set up just to look out for members of the armed forces who were being manipulated.  Because what happened was these for-profit schools saw this Post-9/11 GI Bill, that there was a whole bunch of money that the federal government was committed to making sure that our veterans got a good education, and they started advertising to these young people, signing them up, getting them to take a bunch of loans, but they weren’t delivering a good product.

This goes to, then, the point I made earlier about how we can rate schools.  We’re going to spend some time over the course of the next year talking to everybody — talking to university professors, talking to faculty members, talking to students, talking to families — but if we can define some basic parameters of what’s a good value, then it will allow us more effectively to police schools whether they’re for-profit or non-for-profit — because there are some non-for-profit schools, traditional schools that have higher default rates among their graduates than graduation rates — and be able to say to them, look, either you guys step up and improve, or you’re not going to benefit from federal dollars.  (Applause.)

Because there are a bunch of schools like this one that are doing a good job, and we don’t want money being funneled to schools that aren’t doing a good job.  We want to encourage students to be smart shoppers, to be good consumers.

So there are probably more problems in the for-profit sector on this than there are in the traditional non-for-profit colleges, universities and technical schools, but it’s a problem across the board.  And the way to solve it is to make sure that we’ve got ways to measure what’s happening and we can weed out some of the folks that are engaging in bad practices.

Officials across the government — from the Securities and Exchange Commission to the Consumer Financial Protection Bureau, the Federal Trade Commission to the Department of Education — should take a strong cue from this presidential statement and act forcefully to regulate for-profit colleges and crack down on abuses.