posted at 9:27 am by David Halperin 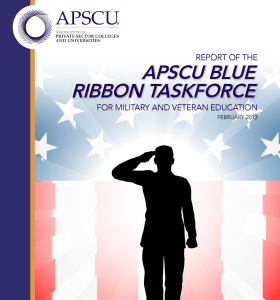 Last year, President Obama warned our military servicemembers that some for-profit colleges “aren’t interested in helping you…. They are interested in getting the money.” He called the schools’ conduct “disgraceful” and told the troops that these schools are “trying to swindle and hoodwink you.”  Holly Petraeus, who directs service member affairs at the Consumer Financial Protection Bureau, has said that for-profit colleges “see service members as nothing more than dollar signs in uniform.” Senator Tom Harkin has issued an extensive report documenting how for-profit colleges use deceptive and coercive recruiting tactics to lure our troops and veterans into high-priced, low-quality programs that leave students deep in debt and take billions annually from taxpayers.

Harkin and his congressional colleagues, some Republicans as well as Democrats, have introduced a series of bills aimed at protecting servicemembers from for-profit college abuses. Troops and vets, as well as other potential students, are getting the message that these schools may be hazardous to their futures; enrollment is down, and the industry is in a tailspin.

The for-profit colleges lobbying group, APSCU, has responded by assembling a “Blue Ribbon Taskforce for Military and Veteran Education.” The task force plans to release its findings to the public next week, but APSCU circulated them to members last night, and Republic Report can share them with you now — a report and a separate brochure.

The task force mostly consisted of executives at various for-profit colleges, plus, as “special advisers,” officials from the American Legion, Veterans of Foreign Wars, and Student Veterans of America (SVA). SVA has sometimes been critical of misconduct by APSCU members.

The recommendations are nice enough, saying that for-profit colleges “should … provide accurate and complete information to prospective students,” but the report appears to exist on another planet, since it fails to acknowledge the widespread abuses by the sector that have been documented by Senator Harkin, the news media, and many others.

The real test will be whether these schools decide to change their ways and actually live up to higher standards. Steve Gunderson, APSCU’s CEO, told Stars and Stripes yesterday that he expects APSCU members to be evaluated “not by what we say we’ll do, but by our conduct.” According to Stars and Stripes, Gunderson “said many of the new guidelines will require some cultural changes for the schools in how they approach and cater to veterans, and represent more than a rubber stamp on existing programs.” If the APSCU schools really mean that, it would be good news. But several decades of misconduct by these for-profit colleges requires the public to watch carefully, and also requires Congress and the Administration to implement serious reforms that ensure that our troops and vets — and all our students — have real opportunities to build careers through higher education.