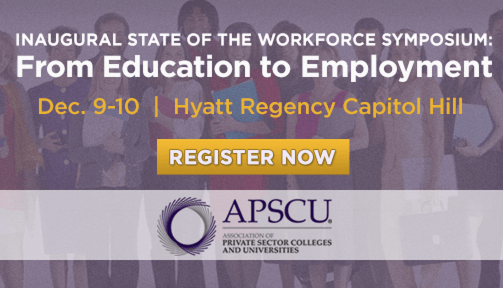 It’s a busy time for APSCU, the trade association of America’s for-profit colleges.  The group spends its time trying to block reasonable measures to hold the worst actors in its industry responsible for their systematic abuses of students and taxpayers, as if the industry is permanently entitled to the enormous amounts of federal taxpayer money — $33 billion in a recent year — that it receives. And the industry is under siege, now that media and government investigations have exposed that many for-profit colleges offer a toxic mix of deceptive recruiting, high prices, low quality instruction, and poor job placement records.

Last week the Guardian revealed documents that, among other things, reaffirmed the link between the troubled for-profit college sector and the controversial corporate advocacy group the American Legislative Exchange Council (ALEC). The documents show that ALEC is facing financial pressures, in part because numerous major corporations quit after media exposed its role in promoting the Stand Your Ground gun laws. ALEC was criticized after Florida police invoked Stand Your Ground in initially refusing to arrest George Zimmerman, the shooter of Trayvon Martin, and ALEC was already under scrutiny at the time for its role in advancing “Voter ID” laws that make it harder for citizens to vote. ALEC documents showed that the group has a “prodical son” (sic) project that seeks to return to the fold lapsed members, and that list included the for-profit college companies Kaplan and Bridgepoint Education. Republic Report was the first to report last year that industry members including Kaplan, Bridgepoint, Corinthian Colleges — and APSCU itself — have all been ALEC members. The documents revealed by the Guardian also show that ALEC listed as possible recruits for membership the for-profit college businesses Capella, DeVry, and Education Management Corp.

Although we don’t know whether any of those companies were actually recruited or joined ALEC, the documents do remind the public of APSCU’s partnership with the group that advanced controversial gun and voting laws just as it opens a two-day event in Washington this morning, called “Inaugural State of the Workforce Symposium: From Education to Employment.”  Keynote speakers scheduled for the APSCU event include Representative John Kline (R-MN) and Rob Andrews (D-NJ), both regular recipients of campaign contributions from the for-profit college industry, as well as, curiously, Andrew Stern, the former president of the Service Employees International Union (SEIU), which has taken a strong stand against for-profit college abuses.

Given that in the past year numerous for-profit college companies, including Corinthian and Career Education Corporation, have been accused by state attorneys general and others of misleading students about their job placement rates, and given that for-profit colleges today account for 13 percent of college students but nearly half of all student loan defaults, it would be great if APSCU actually got serious about pressing its members to train students for careers. But this two-day session is just talk, not action.

And right now, it’s clear that APSCU is actively resisting such accountability for its members. The Obama Administration has for four years pursued a “gainful employment” rule, aimed at cutting off taxpayer funds to career education programs that consistently leave their students with insurmountable debt.  Instead of accepting a reasonable rule, APSCU lobbied heavily to get the rule watered down by the White House, tried to have it overturned by Congress, and then finally managed to get it blocked by a federal judge.  The Department of Education is now working to rewrite the regulation, through a negotiated rulemaking process that resumes this Friday in Washington. While a couple of the for-profit college representatives participating in the rulemaking sessions have engaged thoughtfully on the issue, APSCU continues to denounce the process and claim the Administration is persecuting the industry for ideological reasons.

APSCU also continues to keep member schools, such as ATI, on its membership roster long after it has been made clear that those entities have been systematically defrauding students.

In addition to the Department of Education’s effort to reform the system, so taxpayer money is prioritized to programs that actually help students build careers, federal enforcement agencies from the SEC to the FTC, the CFPB to the Justice Department, are now on the trail of for-profit college frauds and deceptions, as are a bipartisan group of 32 state attorney generals. But APSCU clearly is still fighting for a world where its members can act with impunity, a world where money has corrupted politics, precious federal dollars are wasted on a massive scale, and veterans, single parents, immigrants and others struggling to build better lives get tricked and end up with their futures destroyed.  While there are indeed some fine for-profit college programs in our country, given APSCU’s own record, it has no credibility, and any conference it holds on workforce development is, like the worst members in its roster, simply a sham.