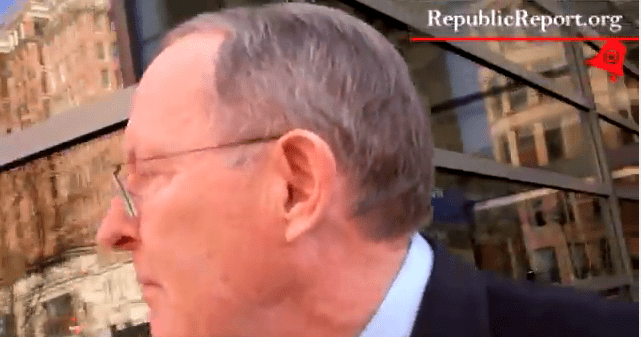 You’ve heard their names. University of Phoenix. Kaplan University. Full Sail University. These for-profit schools promise their students great jobs and opportunities, but often end up delivering little else than tens of thousands of dollars of debt and useless credits or diplomas. What makes matters worse is that these subprime schools get billions of dollars of taxpayer cash through federal loans and grants.

Last month, we  here at Republic Report confronted a U.S. Senator who defends this corrupt industry. Sen. Lamar Alexander (R-TN) attended an event sponsored by the Atlantic Magazine and Microsoft to promote technology’s role in education. During his interview with PBS’s Judy Woodruff, he kept advocating for smaller government and Washington having less of a role in education, but he defended taxpayer support for for-profit schools and criticized efforts to hold these schools accountable for waste, fraud, and abuse.

So I got up during the Q&A session and asked him why Americans are asked to give our taxpayer dollars to schools that have just 11 percent of students but account for 44 percent of student loan defaults.  “I don’t think you take away those choices for students,” he replied, defending the role that these schools play. He failed to explain how paying for students to go to scam schools helps them in any way.

After he was done answer my question, Woodruff asked him how much federal money for-profit colleges get. He was unable to give her an answer. So we waited until the event was over — and for the senator to conclude his conversation with a Microsoft lobbyist — and asked Alexander why he supports lavishing even the worst scam schools with hard-earned taxpayer dollars.

Alexander repeatedly dodged our questions and didn’t know how much federal money these subprime colleges get, despite advocating for them to continue to be subsidized by taxpayers:

FANG: My colleague Zaid Jilani asked you a question during the event. We kind of left a point hanging. Judy Woodruff asked you how much money the for-profit college industry gets. You didn’t answer that question.

ALEXANDER: Well maybe you could.

FANG: The answer is 26 billion. Bloomberg reported that 2 billion of that goes directly to executive compensation. What do you think of that. Isn’t that basically a bailout given the enormous default rates, the scammy practices being investigated in states like Kentucky and California, all across the country. Basically defrauding students from coast to coast. And we’re paying for it.

JILANI: It’s all Washington. You want to get Washington out of something, get it out of these scam schools. That’s what we’re saying.

FANG: Are you defending this fraudulent industry because of the campaign contributions they give to your —

ALEXANDER: Who do you work for?
FANG: Republic Report, we’re a blog that covers lobbying. These for-profit colleges lobby very aggressively. I don’t know if they’re giving you your facts on this. Senator Alexander. You’re here talking about education. But you don’t want to talk about for-profit colleges? Senator Alexander you don’t want to talk — ?

ALEXANDER: No, it’s great to see you. I’m glad to talk about those colleges. And I just did in my remarks.

FANG: But you’re talking about being a responsible steward of taxpayers’ money yet you’re giving these fraudulent companies billions of dollars with no accountability. I mean literally the CEO of Strayer University gave himself 40 million dollars while defrauding his students. I mean this is basically subprime but on the education level. And you’re supporting it. How can you do that as a little government conservative. Is it because of the lobbying and campaign contributions?

It is simply astonishing to watch Alexander — a former college president, governor, and Secretary of Education — tell us that he doesn’t know how much taxpayer money flows to subprime colleges like the University of Phoenix. Either Alexander is remarkably ignorant given his stature and history, or he’s cynically covering up for an industry that has been directly working with Members of Congress to freeze out public scrutiny and engage in a fierce lobbying campaign on its behalf.