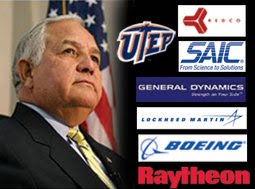 As voters continue to rebuke status quo incumbents and corrupt politicians, yet another upset election could be on the horizon. Congressman Silvestre Reyes (D-TX) is facing a Democratic primary challenge from Beto O’Rourke, a businessman and former member of the El Paso City Council. Reyes, a ranking member of the Intelligence Committee, is known for his incoherent statements on foreign policy and for granting telecom companies blanket immunity for their role in warrantless wiretapping under President Bush.

But as the election heats up in Texas, Reyes’ ties to his campaign contributors may become an issue for voters.

Reyes has a certain dependence on his campaign contributors that extends far beyond elections:

— An investigation from Citizens for Responsibility and Ethics in Washington found that Reyes is the top lawmaker in Congress in terms of spending campaign contribution to reward family members. The study noted that Reyes had distributed at least $600,000 in political funds to his brother and a company controlled by his niece.

— The El Paso Times reports this week that Reyes’ campaign account has paid for a number of services that appear to be associated with personal use. “In 2010, the campaign paid $300 to America OnLine, $600 to Potomac Electric, $1,379.88 to Dish Network and $900 to Southwestern Bell for the ‘DC office,'” the story notes. The Reyes committee paid for pest control and, in what appears to be a violation of House ethics rules, funded campaign events in the U.S. House of Representatives.

— The El Paso Times also reported that a “2002 document filed with the Texas Secretary of State proposed that U.S. Rep. Silvestre Reyes’ El Paso home would be the state’s registered office for a company that gave the congressman thousands of dollars in campaign donations, hired his children and received a $200 million no-bid contract from the federal government.” A General Services Administration inspector general’s investigation hit the project for defective equipment and tens of millions in wasted taxpayer funds. Over a decade ago, the Texas firm employing Reyes’ children was bought by L-3 Communications, a defense contractor that has donated thousands to Reyes’ campaigns for Congress.

Notably, Reyes happens to be low on cash. He has less than $15,000 in total assets, according to his personal finance disclosure. But Reyes’ campaign fundraising is a different story. The congressman has raised at least $1,117,263 during this campaign cycle.

In addition to rewarding himself and his family, the congressman has put this $1.1 million dollar campaign account to work to viciously smear his opponent. His campaign released a video that depicts children attacking O’Rourke with the claim that he supports legalization of all illegal drugs. The ad, as multiple fact-checking organizations have noted, is a blatant misrepresentation of O’Rourke’s views.

O’Rourke is the co-author of a book that criticizes the government’s handling of the drug war and advocates legalization of marijuana. Marijuana prohibition, O’Rourke says, has only boosted the power of Mexico’s drug cartels. He does not favor legalizing all drugs.

Reyes, in contrast with his opponent, has called for militarizing the drug war. Last year, he suggested to reporters that the military should send drones to Mexico to kill cartel leaders:

“We have to do what we’ve done essentially in Pakistan, and that is start taking out the heads of the cartels,” said Reyes, whose four-year tenure as chairman of the House Intelligence Committee ended in December.
That, he said, is what it will take to end the cartel drug wars that have caused 35,000 deaths and brought Juárez and other Mexican towns and cities to their knees since 2008.
Asked if he meant employing the kind of drone missile strikes that have been effective but hugely unpopular in Pakistan, Reyes told El Paso Inc., “I wouldn’t rule that out.”

Reyes’ ultra-hawkish views might seem abnormal for the Democrat, until you consider that drones are helping to finance both Reyes’ political videos and his personal AOL account.

Defense and homeland security companies — in particular, drone-maker — have been the top donors to Reyes for several years. As the election nears, the largest donors to the Reyes campaign have been drone companies:

— DRS Technologies gave another contribution to Reyes, increasing the total amount the company PAC has given the congressman to $4,500. DRS makes RQ-15 Neptune drone.

— General Dynamics also donated to Reyes this month, increasing to total amount the company PAC has given the congressman to $10,000. General Dynamics has several drone-related contracts with the military, and manufacturers mortar weapons for drones.

We’ve covered in the past how corruption has entrenched our broken drug laws. The Reyes-O’Rourke race is another example. Here, an eight year incumbent is using money supplied to him by companies that stand to benefit from the drug war to smear his opponent for favoring a more sensible approach to marijuana. Unfortunately, there’s big money to be made from intensifying the war on marijuana — money that is used to keep politicians with draconian positions elected to office.