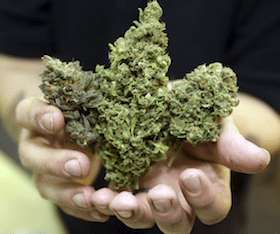 Last year, over 850,000 people in America were arrested for marijuana-related crimes. Despite public opinion, the medical community, and human rights experts all moving in favor of relaxing marijuana prohibition laws, little has changed in terms of policy.

There have been many great books and articles detailing the history of the drug war. Part of America’s fixation with keeping the leafy green plant illegal is rooted in cultural and political clashes from the past.

However, we at Republic Report think it’s worth showing that there are entrenched interest groups that are spending large sums of money to keep our broken drug laws on the books:

1.) Police Unions: Police departments across the country have become dependent on federal drug war grants to finance their budget. In March, we published a story revealing that a police union lobbyist in California coordinated the effort to defeat Prop 19, a ballot measure in 2010 to legalize marijuana, while helping his police department clients collect tens of millions in federal marijuana-eradication grants. And it’s not just in California. Federal lobbying disclosures show that other police union lobbyists have pushed for stiffer penalties for marijuana-related crimes nationwide.

2.) Private Prisons Corporations: Private prison corporations make millions by incarcerating people who have been imprisoned for drug crimes, including marijuana. As Republic Report’s Matt Stoller noted last year, Corrections Corporation of America, one of the largest for-profit prison companies, revealed in a regulatory filing that continuing the drug war is part in parcel to their business strategy. Prison companies have spent millions bankrolling pro-drug war politicians and have used secretive front groups, like the American Legislative Exchange Council, to pass harsh sentencing requirements for drug crimes.

3.) Alcohol and Beer Companies: Fearing competition for the dollars Americans spend on leisure, alcohol and tobacco interests have lobbied to keep marijuana out of reach. For instance, the California Beer & Beverage Distributors contributed campaign contributions to a committee set up to prevent marijuana from being legalized and taxed.

4.) Pharmaceutical Corporations: Like the sin industries listed above, pharmaceutical interests would like to keep marijuana illegal so American don’t have the option of cheap medical alternatives to their products. Howard Wooldridge, a retired police officer who now lobbies the government to relax marijuana prohibition laws, told Republic Report that next to police unions, the “second biggest opponent on Capitol Hill is big PhRMA” because marijuana can replace “everything from Advil to Vicodin and other expensive pills.”

5.) Prison Guard Unions: Prison guard unions have a vested interest in keeping people behind bars just like for-profit prison companies. In 2008, the California Correctional Peace Officers Association spent a whopping $1 million to defeat a measure that would have “reduced sentences and parole times for nonviolent drug offenders while emphasizing drug treatment over prison.”

RELATED: Why Can’t You Smoke Pot? Because Lobbyists Are Getting Rich Off of the War on Drugs

To receive stories and investigations about political corruption, sign up for our daily digest here.