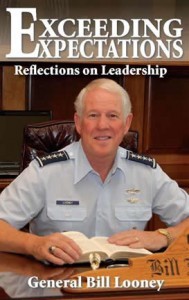 The predatory schools of the for-profit college industry — Kaplan, Corinthian, Bridgepoint, and others — are on high alert. President Obama recently signed an executive order aimed at protecting veterans from bad behavior by these colleges. Speaking to U.S. troops at Fort Stewart, Georgia, the President called the conduct of these schools “appalling” and “disgraceful” and told the troops that these schools are “trying to swindle and hoodwink you.” But the lobbyists for these for-profit corporations aren’t happy about the prospect of the federal government — which accounts for 90 percent or more of the revenues of some of these schools — at last providing some oversight.

The scam schools’ lobbyists need a way to distract the public and lawmakers from the fact they’ve been caught again and again abusing veterans and sucking up taxpayer dollars while providing often poor quality programs.

So they did what lobbyists always do. They paid someone to argue on their behalf.

Air Force Gen. William R. Looney III was a “a former command pilot with more than 4,000 flying hours, including 2,500 in the F-15,” but when he retired in 2008, he began consulting for the private sector. He hit the lecture circuit, giving “leadership” speeches for money. “His powerful stories from the military sphere seemed as relevant to us (business leadership) as they would be to a platoon commander or sports captain,” said Tom Green, Manager at Bain & Company Inc. (where GOP presidential nominee Mitt Romney worked).

In 2010, Looney joined the board of TUI University, an “online education” for-profit college. The school bragged that Looney’s presence was a “testament to our track record of success with military and veteran students.”  The school last year embarked on a “Military Education Tour” to whitewash its record with veterans and other students. At the same time, Looney picked up Spartan College of Aeronautics and Technology as a client. Both of these schools are members of the industry’s APSCU lobby group.

As the public started to realize how badly for-profit colleges were ripping off the military community, Looney jumped to the schools’ defense. He penned a column in Stars and Stripes, the community’s premiere paper, defending the industry. He warned that the federal government shouldn’t think about cutting off APSCU’s gravy train, because its colleges may “simply do a better job of meeting the special interests and requirements of military service and veteran students.”

Looney went further in an interview with for-profit colleges lobby group APSCU, posted on its website. He called efforts to hold the industry accountable “an insult and an outrage” and said that if the government stops funding predatory schools that APSCU represents, it’s equivalent to telling veterans “the benefit you have earned by doing this service can only be used in this way because we, the authorities, have determined that you are not savvy or smart enough to use this benefit wisely.”  Never mind accounts of for-profit college recruiters using high-pressure tactics on troops with brain injuries “so severe some of them couldn’t recall what courses the recruiter had signed them up for. ”

What’s really an outrage is not the idea that the government won’t dump taxpayer cash on schools that give our men and women in uniform a terrible education and leave them deep in debt. The insult is that Looney spent 40 years in the military only to end up working as a mouthpiece for an industry that is abusing his comrades.

But Looney doesn’t sell his services for cheap. Looney charges between $20,001-30,000 a speech, according to his booking agency.