Only In Washington: Obama’s Lobbying Ban Leads To More Corruption 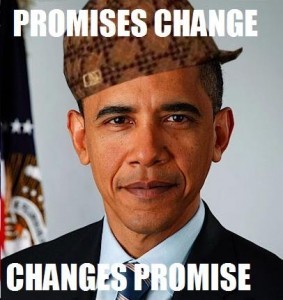 When Republic Report launched Sell Out Of The Week feature, our initial winner was President Obama, who earned the prize for embracing his super PAC, essentially endorsing unlimited corporate cash invading the democratic process, after having failed over three years in the White House to take some critical steps to clean up the system. We’ve chosen him again this week, but for a different money in politics offense.

Obama campaigned on a promise of reform and transparency, pledging as a candidate that lobbyists “will not run my White House…and will not drown out the voices of the American people.” After he was elected, campaign finance reformers hailed the administration’s new lobbying and records rules; Democracy 21’s Fred Wertheimer said that the lobbying restriction “constitutes a major step in setting a new tone and attitude for Washington that challenges the lobbyist, special interest culture.”

But three years into his presidency, Obama’s lobby reform is broken. The rules once seen as revolutionary are counterproductive, meaningless, and frankly ridiculous.

The administration’s decision this week to bring in Steve Ricchetti to serve as a counselor to the vice president illustrates how ineffective Obama’s lobbyist policies really are. Ricchetti is a talented politico who ably served President Clinton, but much of his time out of government he has served as a corporate lobbyist. He has lobbied for everyone from Fannie Mae to General Motors, and recently serving as president of his own lobbying firm which represented the American Bankers Association, among others. So, he’s a lobbyist, right? How could Obama so blatantly break his own rule?

Ricchetti, as the Washington Post’s Dana Milbank writes, got around the lobbyist ban “by using one of Washington’s most-honored traditions: the loophole. Just as Obama won the presidency, Ricchetti de-registered as a lobbyist.”

Encouraging lobbyists to de-register is a loss for transparency and reform, not a victory.

Meanwhile, the administration has also resorted to issuing “waivers” to lobbyists “uniquely qualified” to serve in the supposedly no-lobbyist federal government. Case in point: William Lynn who was appointed Deputy Secretary of Defense in 2009. Lynn had previously worked as the top lobbyist for Raytheon Corp., one of the Pentagon’s largest contractors.

Furthermore, as Milbank points out, the ban is enforced on a seemingly arbitrary basis, often excluding people who lobby on behalf of good causes, not just corporate interests. The administration wouldn’t grant a waiver to Tom Malinowski to head up the State Department’s human rights bureau. Malinowski’s crime? Lobbying to protect torture victims with Human Rights Watch.

The president criticizes the everyday corruption plaguing Washington, while also actively engaging in it. For example, he’s offered jobs to more than half of his 47 biggest 2008 fundraisers and at least 24 campaign fund bundlers have been appointed ambassadors to countries like Finland, Australia, and Luxembourg.

This administration is either naïve or duplicitous in its understanding of how money corrupts politics. We’re not sure which is worse.