While government services are being slashed and every American told that they can expect less retirement benefits, Congress is moving to increase the amount taxpayers hand over to defense companies. From the F-35 jet, which will carry a lifetime cost of over $1.45 trillion dollars, to a $594 million“slush fund” of new Pentagon programs, lawmakers continue to shovel incredible amounts of precious public dollars over to military contractors.

The reason for this spending extravaganza should be obvious: Defense companies have some of the most effective and expensive lobbying strategies of any special interest.

And last Thursday, at the Ritz Carlton of Tyson’s Corner just outside the Beltway, a legion of military contractors convened to thank the biggest defense industry porker in Congress: Representative Buck McKeon (R-CA). The event was hosted by the National Defense Industries Association, a lobby group for major weapons manufacturers and other military-related companies.

A look at the sponsors of the black tie event revealed some of the biggest recipients of taxpayer money, including Lockheed Martin to General Electric, EADS North America, Bechtel, and Pratt & Whitney (a key contractor of the wasteful F-35). Republic Report arrived at the event, but we were not allowed in. Here’s all the video we could capture:

There’s plenty of reasons these lobbyists would invite McKeon to a dinner at the Ritz Carlton, and toast him with an award. McKeon has fought to restore some $450 billion in funds to the defense budget, while slashing programs for the elderly, teachers, and other essential services.

Here’s a picture of which military contractors bought tables during the McKeon event: 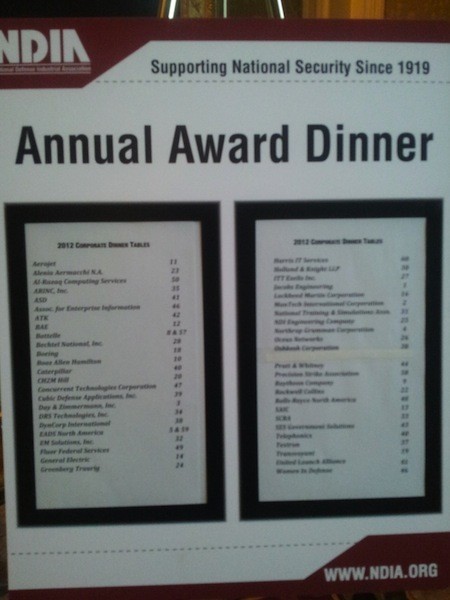 At the dinner, McKeon reportedly mocked Senator Harry Reid and the Obama Administration for agreeing to cuts to the defense budget as part of a larger deficit reduction deal.

As I reported for Salon.com, the defense lobbyists haven’t only rewarded McKeon with dinners and campaign contributions, they’ve also funneled money to his wife. Although Patricia McKeon ran for a local office in California, she has been the recipient of thousands of dollars in contributions from military contractors tied to her husband.