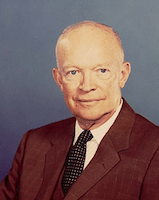 President Dwight Eisenhower represented another era, when many in both parties rebuked special interests. At one point, Eisenhower vetoed a natural gas deregulation bill that he even agreed with on principle because the gas lobby had used such disreputable tactics in moving the legislation through Congress. Eisenhower’s effort against lobbying is best remembered though by his farewell address, in which he decried “the military-industrial complex” — the confluence of for-profit defense contractors and politicians and the resulting corruption of our military and foreign policy.

Now, military lobbyists and one of the most corrupt members of Congress, Buck McKeon (R-CA), are disgracing the former general’s legacy with a party at the Ritz-Carlton next month. McKeon, as chairman of the Armed Services Committee, has led a one-man crusade to block any efforts to trim even a dime of wasteful spending from the military budget (while McKeon and his wife are handsomely rewarded with defense industry cash). In recognition of McKeon’s pork barrel spending for defense contractors, the lobbyists at the National Defense Industry Association are thanking the congressman with an honor called the “Eisenhower Award.” 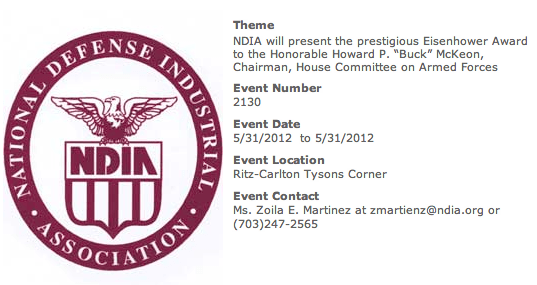 What is the National Defense Industry Association? The association is a broad lobby group for defense companies like Lockheed Martin, Northrop Gumman, General Dynamics, United Technologies, and many more. United Technologies, for example, is lobbying aggressively to spend hundreds of millions more in taxpayer money on the wasteful F-35, which Senator John McCain (R-AZ) has called a “travesty” given the constant cost overruns and dubious claims made by defense contractors.

In a way, trade groups like the NDIA embody Eisenhower’s warning about the “military-industrial complex.” By honoring military pork spending with an award named after Eisenhower, both McKeon and the lobbyists at NDIA are disgracing his legacy.