For-Profit College Lures 14-Year-Old, Dumps Him, Sticks Him With The Bill

posted at 4:30 pm by David Halperin 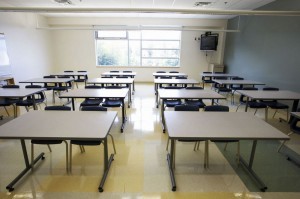 All across the country, people are waking up to the abusive practices of for-profit colleges, which take $33 billion a year in taxpayer money, much of it for poor quality programs that leaves students deep in debt and unemployed.  The newest bombshell is an in-depth report from Chris Parker in The Village Voice highlighting students and employees who lived first-hand the deceptions of these institutions:

Bobby Ruffin Jr. was only 14 when a recruiter from Ashford University called. The Birmingham, Michigan, boy thought he’d clicked on a link promising help finding money for college. It was actually just a lead generator for the for-profit, online school’s sales staff…. He told the recruiter that he wanted to be a doctor. She assured him that Ashford could be a stepping-stone to that dream.

Never mind that he was only in the eighth grade. “She said, ‘You’ll be working toward a degree as a medical doctor, so when you do graduate high school, you’re almost there,'” Bobby says today. “I’m like: ‘This is great. I’m going to talk to my mom.’ And she’s like: ‘No, I wouldn’t tell your parents because that would take away from the shock when it happens. If I were you, I’d complete the program, and when graduation comes around, let them know. Mom and Dad will be super excited.'”

Admission to Ashford requires a high school diploma or equivalency. So when it came time to fill out the financial-aid forms, the recruiter told Bobby to claim that he’d already graduated. He objected, but she insisted “the loan-processing company will go back and correct everything.” ….

Bobby took online classes for almost a year. But when he wouldn’t endorse Ashford’s lying on his financial-aid forms, administrators miraculously discovered that he was under 18. Since this left him ineligible for federal aid, Ashford was forced to return his loan money to the feds. The school wouldn’t be eating those costs. Bobby would. Ashford, which declined interview requests for this story, sent him a bill for $13,000.

Steve Burd, one of the leading experts on these issues, reminds us of one strategy the big for-profit education companies have used to reduce awareness of their fraudulent conduct — settling lawsuits by paying the complainants, admitted nothing, and demanding that case files be swept under the rug. That’s why, he says, the new report from Senator Tom Harkin on abuses by this industry is so important — Harkin’s staff has collected and published reams of internal industry documents for people to review.

With the Harkin report generating headlines like this one from a USA Today editorial — “For-profit college. What a racket.” — there’s a real chance that the tide will turn and the main institution blocking reforms to protect students and taxpayers — the U.S. Congress — will finally take action. Congress is stalemated on this issue because numerous Senators and Representatives have been enticed by the industry’s heavy lobbying and campaign contributions — paid for, utlimately, by taxpayers, since many these schools get around 90 percent of their revenue from federal aid.

But the more citizens become aware of bad practices in this industry, and the more they make clear, through emails and town hall meetings, that they are tired of members of Congress defending these bad actors, the more likely it is that the corruption will end, this industry will at last be held accountable, and federal aid will go to effective schools that help students, rather than phony schools that ruin their lives.

UPDATE: While Ashford apparently ignored requests for comment by The Village Voice, they have now written to the Voice, and to me, disputing the Voice’s account regarding Bobby Ruffin:

Your Huffington Post blog this week on Ashford University and the supposed story of Bobby Curry was entirely based on a wholly inaccurate article that ran in the Village Voice. Attached is a formal request we have sent to the Voice for an immediate correction. We also request that you immediately correct your blog post, which is spreading demonstrable falsehoods.

The current conversation about for-profit schools has been clouded by numerous inaccuracies and falsehoods. Wednesday’s Village Voice article (“For-Profit Colleges Only a Con Man Could Love” by Chris Parker) is one of the most egregious yet. The supposed story of Bobby Curry, a teenager allegedly exploited by Ashford University is, in actuality, the story of someone who intentionally defrauded and stole from the University.

We were never given the opportunity by the Village Voice to specifically comment on the accuracy of the Bobby Curry anecdote in the article, which has been republished numerous times. Had the writer bothered to check his facts—which were clearly revealed in the University’s own internal investigation and in documents that we would have provided—he would have realized that this was a case of identity fraud; and further, that when we uncovered the problems, Ashford acted swiftly to return federal loan money and absorb the loss. Here are the facts:

In 2009, a “Bobby Curry” applied to Ashford as a female (not a male). In the enrollment agreement, a parent certified that the student was a high school graduate. The student began classes in accordance with all University, state, and federal policies and regulations.

While we welcome a robust debate in the media about the new model of higher education presented by for-profit schools, we do expect some level of journalistic ethics. By spreading demonstrable falsehoods, without attempting to check the facts specifically regarding the supposed story of Bobby Curry, the Village Voice is doing a great disservice to students, faculty, and the American public. We expect the August 1, 2012 Village Voice article to be corrected in all publications in which it appeared, and for greater care to be given to confirming such allegations in the future.