Who Pays Ed Gillespie? Mitt Romney Signs Up Yet Another (Unregistered) Lobbyist As A Senior Advisor 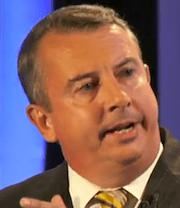 Mitt Romney announced yesterday that Ed Gillespie, a corporate lobbyist and former Republican Party chair, will become his senior advisor. Gillespie joins a kitchen cabinet of other “senior advisors” to the Romney campaign who double as influence peddlers. But in Gillespie’s case, he no longer discloses the names of his clients, which raises the question: Who is paying Gillespie?

Gillespie used to work at Quinn Gillespie & Associates, a lobbying firm that registered and disclosed the names of its clients. As the Washington Examiner noted, Gillespie worked in 2007 for an industry group that promoted the idea that health reform should include some version of both the individual and employer mandate. On his last disclosed lobbying registration form, Gillespie indicated that he worked for a range of clients including Amgen, NelNet, Delta Airlines, AT&T, and Bank of America.

The public has a right to know who is advising our presidential candidates, and if they are lobbyists, who they represent. The little we do know about Gillespie’s current client list has been made public by Chapter 11 filings by Washington Mutual, the failed mortgage lending and consumer banking giant. Republic Report recently obtained a copy of the document. In 2009, the company was forced to list its outside contractors, revealing that the bank had paid Gillespie at least $40,000: 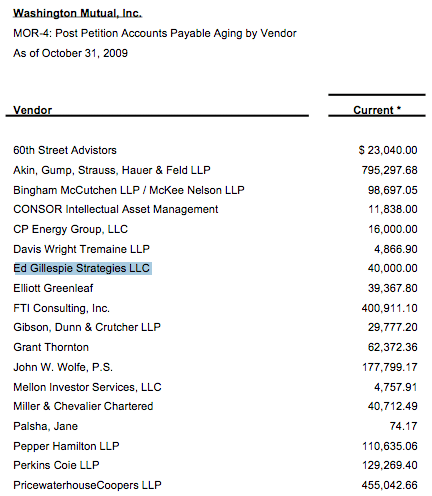 The Gillespie situation is almost identical to the Obama campaign’s relationship with Anita Dunn, an Obama advisor who also serves as a communications consultant helping corporations win legislative and regulatory fights although she does not register as a lobbyist. Media reports have linked Dunn’s firm to industry groups looking to bailout subprime for-profit education companies and food companies looking to weaken the administration’s nutrition goals. As we’ve reported, Dunn stands by her dual role as an unregistered lobbyist and a presidential advisor. Will Gillespie receive the same scrutiny?