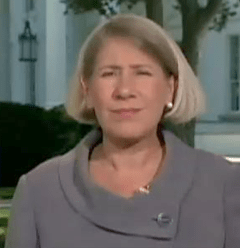 Though President Obama lashed out at the influence of lobbyists in his State to the Union address, a current advisor to his campaign and administration, former White House communication director Anita Dunn, runs one of fastest growing corporate “public affairs” firms in Washington DC. Dunn left her post as a public servant in late 2009 to return to the firm now known as SKDKnickerbocker. Although she is not technically a registered lobbyist, she has been hired to manage a variety of corporate lobbying campaigns against President Obama’s reforms.

Last month, Republic Report asked Dunn about the ethical questions raised by her dual role as an influence peddler, and simultaneous advisor to the President of the United States. Video below:

Dunn acknowledged that she works for “some corporations” because “people have a right to be heard.” But she made the technical distinction that she is not a “registered lobbyist.” Current lobbying laws are easily exploitable, so much so that Newt Gingrich accepted $1.6 million in fees from Freddie Mac to promote its policy agenda, but never registered as a lobbyist.

Yet Dunn visited the White House at least thirty times since leaving to become a corporate consultant, according to White House visitor logs. And despite Dunn’s parsing of the word lobbyist, her firm SKDKnickerbocker has played up its ability to “lobby … members of Congress” and influence government for clients.

Fundamentally, Dunn has been hired by clients who are in the midst of intensive lobbying fights. If her lawyer has concluded that she’s not a lobbyist under the law, common sense tells us that she is engaged to influence lobby battles in Washington. The Republic Report has compiled just a few examples of Dunn’s recent work for her clients:

— Dunn was hired by Kaplan Education to block Obama’s reforms on for-profit college companies, an industry plagued by by low quality education, false promises to students, and fraudulent business practices.

— Dunn and her firm were hired to push for billions in tax breaks for already profitable corporations. As Bloomberg reported, SKDKnickerbocker manages a lobbying campaign called “Win America,” an effort by companies like Google and Pfizer to receive hundreds of billions in tax breaks on profits made overseas.

— Dunn was hired by a coalition of food manufacturers to fight the Obama administration’s proposals on food nutrition standards. As the Washington Post reported, the firms paying Dunn include General Mills and PepsiCo.

Newt Gingrich unintentionally drew attention to what some in Washington call “shadow lobbyists” when he said he was merely offering Freddie Mac his “advice as a historian,” not lobbying. Dunn seems to be caught in a similar trap, and her role as both a corporate influence peddler and an advisor to the President may undercut Obama’s rhetoric of reforming Washington.

Transcript below the fold:

FANG: Hi my name is Lee Fang from the Republic Report. The 2012 election is shaping up to be just as much about the undue influence of lobbyists, just as much about the economy. You see this from the rhetoric of Occupy Wall Street to the attack ads from Romney against Gingrich. So my question is for Anita Dunn. You have a lot of access to the President, from advising his campaign to regular visits to the White House. Do you think its a little bit disingenuous that you’re simultaneously being paid by a lot of corporations to lobby against his reforms? Specifically on childhood obesity and predatory for-profit colleges.

DUNN: Okay well I’d like to start by saying I’m not a lobbyist. I never have been a registered lobbyist, and I do public relations.

DUNN: The difference is — and I should also say to my friend over here that my cooling off period from the White House, because this President has instituted some of the strongest ethical reforms of any President ever — means that I don’t talk to anybody in this administration on any issue where I’m doing public relations for two years after I left the White House. Because as White House communications director, I was involved in so many issues. It is not possible to say I’m going to wall off this area. So I don’t actually talk to anybody in the White House. And I do work with people, and I do work with nonprofits, and I work with some corporations because the fact of the matter is we’re in a democracy and there’s a dialogue and people have a right to be heard. And the fact of the matter is that most of the time when I work with people, they have a story to be told and we tell it. Now, this President has done things to allow my friend over here to say well I’m a regular visitor to the White House. Why? Because part of the move by this White House towards transparency is that anybody can go on any time and see who’s visiting the White House. It sounds like a small thing, but it isn’t. Because it means that there is a greater degree of transparency and accountability. This White House by and large has shut down the revolving door because people who leave the White House cannot lobby this administration on issues that they worked on while they were inside the administration. This White House and this campaign don’t take money from registered lobbyists. Now, these are not rules that Congress applies to itself. As we move forward in this political process, one thing you might see is that voters will continue to demand greater transparency from everybody. And if you look right now on whether Governor Romney is going to release his tax returns, the reality is that politicians aren’t going to have a choice about transparency much longer in this country because voters expect it of them.