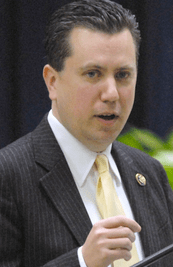 One of the worst forms of bribery that takes place in Washington, D.C. arises when lawmakers retire. As we’ve reported, many lawmakers, once they announce retirement, open themselves up for corruption. These members of Congress will make a special deal or offer an earmarks, and end up taking jobs later at firms that benefit from these acts of Congress.

After highlighting this phenomenon, we sent a letter to retiring lawmakers this year, asking them to at least make negotiations with the private sector public. (Current ethics rules are confusing, easy to circumvent, and rarely enforced). Some lawmakers, like Congressman Brad Miller of North Carolina and Congressman Dale Kildee of Michigan, agreed with us and said they would disclose their negotiations. Others, like Congresswoman Jean Schmidt, literally ran away from the idea.

We ran into Congressman Dan Boren, a retiring Democrat from Oklahoma, last week. He told us he has no plans to become a lobbyist, but that if he does go down that route, he would post everything to the public:

Some lawmakers are already flaunting their potential corruption. Congressman Jerry Miller, a Republican from California, has already hinted to the press that they would like a job on K Street. Heath Shuler, a Democratic congressman from North Carolina, has even suggested that he’s held meetings with lobbyists in hopes of obtaining a job. While Shuler interviews for a job as an influence peddler, he continues to serve as an influential lawmaker.