Why We’re Asking Congress To Take a Stronger Stand vs. K St Corruption

posted at 3:33 pm by David Halperin 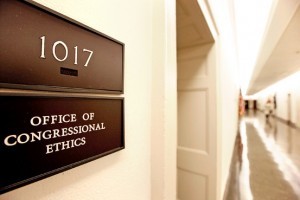 Today, Republic Report announced that we are asking all 34 retiring members of Congress to make a simple, common sense commitment: “I will disclose any negotiations or offers for jobs on the front page of my congressional website.”  This afternoon we are delivering letters to all 34 congressional offices seeking this commitment.

We want you to be involved in this effort.  So you can make the best case possible, we want you to know the current job disclosure obligations of U.S. Representatives and Senators.

The House and Senate each have rules placing some obligations on members — all mandated by the Honest Leadership and Open Government Act of 2007.  But there are limits and loopholes that prevent effective disclosure to the public of all activities that would raise concerns about conflicts of interest and potential corruption — concerns about members of Congress doing legislative favors for potential future employers. Republic Report is asking members to make public all employment negotiations or offers, and to do so in a highly visible place – their own websites.

Here are the current rules and why they don’t measure up:

The Senate rule is similar and also does not adequately protect the public from conflicts of interest by Senators.  A Senator may “not negotiate or have any arrangement concerning prospective private employment” until after his or her successor has been elected, unless, within three days of negotiations starting, the Senator files a statement with the Secretary of the Senate for public disclosure. Unlike in the House, Senators are barred from negotiating or making arrangements for jobs “involving lobbying activities” until after the election of a successor.

Again, there are loopholes.

In short, the rules aren’t strong enough to give the public confidence that members of Congress are acting in the public interest, and not in the interests of future or potential employers they want to please. The simple commitment we seek –disclosing all job offers and negotiations on a public website — could help deter backdoor bribery and restore confidence in Congress.
NOTE: This post has been updated from the original posting to add some details about the provisions and workings of the rules.