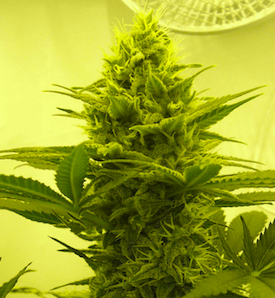 Over the weekend, the Associated Press noted that there are increasing efforts across the country to reform our nation’s draconian laws outlawing marijuana. Colorado could be the focal point of this movement. Voters this year will decide on Amendment 64, which would legalize marijuana use and regulate and tax the drug in a similar fashion as the state controls alcohol.

Amendment 64 is similar to Proposition 19, the marijuana legalization ballot initiative that fared surprisingly well in California in 2010. Although Prop 19 garnered more voters than Meg Whitman, the Republican candidate for governor that year, it did not pass. Republic Report published an exclusive investigation into the opponents of Prop 19, revealing that a senior police association lobbyist orchestrated much of the attacks on Prop 19 while earning a hefty salary funneling federal Drug War money to his law enforcement clients. If Prop 19 had passed, the lobbyist, John Lovell, might have lost opportunity to channel taxpayer cash to his clients.

With the Colorado initiative just picking up steam, it’s worth looking at the political forces organizing to lobby against its passage. Republic Report has reviewed campaign finance records and compiled this survey of the opposition to Amendment 64:

— Two-thirds of the entire the budget for the “No on Amendment 64” committee has been provided by a Florida-based nonprofit called “Save Our Society From Drugs.” The organization was founded by Betty Sembler, a veteran Drug Warrior whose husband is on the Mitt Romney for President finance team. According to one biography of Sembler, she has been awarded an “honorary agent status by the DEA” and was pivotal in founding drug rehabilitation clinics and the Drug Free America Foundation. From 1976 to 1993, the Sembler family operated a drug rehabilitation clinic known as STRAIGHT Inc., which closed down after a shocking series of scandals that revealed that clients faced rape, faced beatings, forced hunger, and other abuses at the clinics.

— The “No on Amendment 64” committee was registered by Jonathan Anderson, a Republican lawyer with law/lobbying firm Holland & Anderson. Anderson, a former aide to Gov. Bill Ritter (R-CO), was deeply involved in setting up organizations to coordinate corporate cash into the 2010 election.

— The day-to-day management of the “No on Amendment 64” committee is coordinated by CRL Associates, a lobbying firm registered in Denver.

— The “No on Amendment 64” committee contracts with Keating Research Inc, which bills itself as a progressive consulting firm, for polling.

— A coalition website that links to the “No on Amendment 64” effort lists other allies of the campaign with many groups that rely on marijuana prohibition for financial gain, including police associations like the Colorado Law Enforcement Officers Association (police associations often utilize federal grants which provide funds for law enforcement as long as officers prioritize drug enforcement, including marijuana). The list also includes several religious right organizations like Focus on the Family.

As voters begin to consider Amendment 64, the forces opposed to legalization will likely spend a great deal on campaigning. The campaign to keep marijuana illegal has not yet run any ads and has only spent money so far on its own poll, a campaign website, and other expenditures to political consultants, according to our review of Colorado campaign finance records.