Cheesecake Lollipops And Crabcakes: Pennsylvania Taxpayers Have Spent $250,000 On ALEC 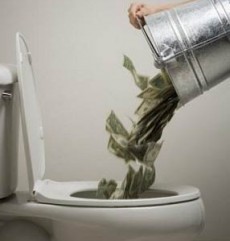 The American Legislative Exchange Council (ALEC) is the most powerful corporate front group you’ve never heard of ,or at least until more than a dozen major corporations recently quit in the wake of the controversies over it pushing the “Stand Your Ground” laws. ALEC lets corporations write model legislation that it then secretly ships to state legislatures across the country. These bills — which do everything from attack your right to vote to privatize your schools — pass into law without citizens ever knowing that corporations wrote them.

But it gets worse. Not only is ALEC secretly coordinating with state legislators, but taxpayers are actually being asked to pay for some of the organization’s activities.

Keystone Progress did some research and found that Pennsylvania taxpayers have paid at least $250,000 since 2000 on junkets and other events that ALEC held with legislators. This spending includes “$3,000 for cheesecake lollipops, $3,600 for crabcakes made to order; junkets to Orlando, Las Vegas, Monterrey and other cities; dues for their legislators’ membership in ALEC; and at least $50,000 paid directly from the General Assembly to ALEC.”

One way ALEC is able to get away with bleeding taxpayer dollars from hardworking Pennsylvanians is by never officially registering as a lobbying group. But it’s undeniable that its work to give corporate-written legislation to lawmakers who pass ALEC’s bills all over the country is a particularly harmful form of lobbying. And now we know that Pennsylvania’s taxpayers are being asked to foot the bill for the corporate corruption of their own government.