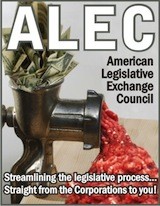 There have been complaints in states like Minnesota that the American Legislative Exchange Council violates state lobbying laws, particularly with gifts for state lawmakers and undisclosed meetings with corporate lobbyists. ALEC, as we’ve reported, is the secretive bill-writing front group responsible for risky privatization schemes, massive taxpayer giveaways to big business, and dozens of other laws.

But Boyd Brown, a politician in South Carolina who is critical of ALEC’s agenda, pointed out that ALEC is actually exempt from state lobbying laws:

One day after State Representative Boyd Brown (D-Fairfield) sent a letter to his colleagues in the South Carolina General Assembly urging them to resign from the American Legislative Exchange Council (ALEC), Rep. Brown discovered that ALEC had been written into the South Carolina Code of Laws several years ago. In Section 2-17-90 (1) ALEC is specifically exempted from the law prohibiting lobbyist’s principals from offering, soliciting, or facilitating loding, transportation, entertainment, food, meals, beverages, or an invitation to a function paid for by a lobbyist’s principal. […]

The lobbyist’s exemption for ALEC was written in 2003 by former Republican Speaker of the House and ALEC member, David Wilkins. Wilkins later served as President Bush’s Ambassador to Canada and as the Transition Committee Chairman for Governor-elect Nikki Haley, also a former ALEC member.

Announcing a new piece of legislation to close the ALEC loophole, Brown said he is “disgusted that this group has been specifically exempted from ethics laws in the state of South Carolina.

The relevant portions of the lobbying law are below:

(A) Except as otherwise provided under Section 2-17-100, no
lobbyist’s principal may offer, solicit, facilitate, or provide to a
public official or public employee, and no public official or public
employee may accept lodging, transportation, entertainment, food,
meals, beverages, or an invitation to a function paid for by a
lobbyist’s principal, except for: