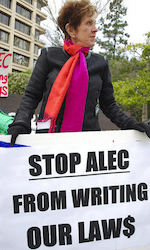 On Saturday, Republic Report’s Zaid Jilani reported that the National Association of Charter School Authorizers was one of the many covert members of the American Legislative Exchange Council, the controversial front group that helps lobbyists ghostwrite state law. As Jilani noted, NACSA is funded in large part by taxpayer dollars:

A few hours ago, NACSA released a statement announcing that it will exit ALEC:

Our work with ALEC has been focused entirely on promoting excellent charter schools. As part of our annual review processes, however, we determined that alternative strategies would be more effective in achieving these policy objectives. Thus we will not be renewing our membership in ALEC when it expires next month.

The move is just the latest in a long exodus from ALEC. Over two dozen legislators and many corporate members have left the organization since Republic Report and several other good government groups began publicizing ALEC’s role in crafting reckless legislation behind closed doors. ALEC has been linked to bills designed to enhance telecom monopolies, increase pollution, and steer taxpayer giveaways to big businesses.