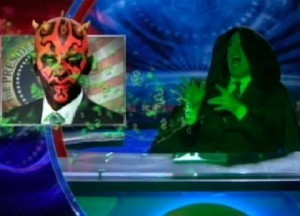 posted at 10:27 am by Suzanne Merkelson

Comedy Central fake news host Stephen Colbert’s best contribution to the Election 2012 coverage so far has been his hilarious and incredibly illuminating takedown of the super PAC: Colbert has started a super PAC, employed a former Federal Elections Commission (FEC) chairman as his lawyer, and even transferred control of his super PAC to Jon
Continue Reading >>>