Behind The Lobbying Effort That Helps Save Apple $2.4 Billion In Taxes A Year 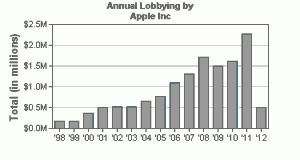 The New York Times dropped another bomb on Apple’s “iEconomy” this weekend with an expose that shows how the world’s biggest corporation evades billions of dollars in taxes by creating subsidiaries in low-tax states and countries like Nevada, Ireland, the Netherlands, Luxembourg, and the British Virgin Islands. While some of Apple’s monumental success is due
Continue Reading >>>