posted at 3:18 pm by David Halperin 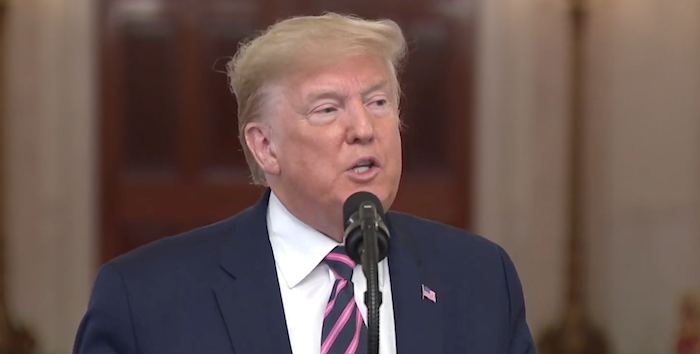 At the end of the trial, Chief Justice John Roberts declared, “It is, therefore, ordered and adjudged that the said Donald John Trump be, and he is hereby, acquitted of the charges in said articles.” But while the Senate’s final action was formally called an “acquittal,” and we know Trump loves to say the word “total,” the Senate’s action was not comparable to an acquittal of a defendant in a normal trial and cannot reasonably be deemed “total” or an “exoneration,” as those words are normally used.

That’s so for at least two big reasons.

(1) First, under federal law and the law of every state but one, the jury in a criminal case does not reach a verdict — guilty or not guilty — unless its vote is unanimous. Had Trump faced a criminal trial in court, instead of a trial in the Senate, a divided vote would not be called an acquittal. It would be called a hung jury, and the government could try the case again.

Because the Constitution requires a two-thirds vote of the Senate for conviction, yesterday’s Senate votes — 52-48 against the abuse of power count and 53-47 against the count of obstruction of Congress — were each deemed an acquittal. But Trump would have been considered acquitted even if the vote had been 66-34 in favor of convicting him.

Considered in that context, a final vote in which nearly half of the senators voted to convict cannot legitimately be called a “total acquittal.”

(2) Second, under the Constitution, the Senate cannot separate the judgment of guilt from the penalty of removal from office, and some Republican senators seemed to lean heavily on that reality in explaining their votes to acquit.

Article II, section 4 of the Constitution provides that the president “shall be removed from Office on Impeachment for, and Conviction of, Treason, Bribery, or other high Crimes and Misdemeanors.” There is only one Senate vote, up or down, and they must remove the president from office if they convict. By comparison, in a criminal trial in court, the judge normally instructs the jury not to consider the possible penalty in deciding whether the defendant is guilty or not guilty; the sentence is determined by the judge, or sometimes the jury, in a separate process only if the defendant is convicted.

Several Republican senators sharply condemned Trump’s actions, but suggested they were deterred from voting to convict because of the automatic penalty of removal.

Lisa Murkowski (R-AK) said, “The President’s behavior was shameful and wrong. His personal interests do not take precedence over those of this great nation. The president has the responsibility to uphold the integrity and honor of the office.” But, “The response to the President’s behavior is not to disenfranchise nearly 63 million Americans and remove him from the ballot…. Removal from office, and being barred from ever holding another office of honor, trust, or profit under the United States is the political death penalty….The voters will pronounce a verdict in nine months, and we must trust their judgment.”

Susan Collins (R-ME) said, “it was wrong for President Trump to mention former Vice President Biden on that phone call, and it was wrong for him to ask a foreign country to investigate a political rival.” But, “I do not believe that the House has met its burden of showing that the President’s conduct – however flawed – warrants the extreme step of immediate removal from office.”

Rob Portman (R-OH) said, “the President asking Ukraine for an investigation of Joe Biden was inappropriate and wrong….  But while I don’t condone this behavior, these actions do not rise to the level of removing President Trump from office and taking him off the ballot in a presidential election season that’s already well underway.”

Marco Rubio (R-FL) said, “for me, the question would not just be whether the President’s actions were wrong, but ultimately whether what he did was removable. The two are not the same. Just because actions meet a standard of impeachment does not mean it is in the best interest of the country to remove a President from office… for purposes of answering my threshold question I assumed what is alleged is true. And then I sought to answer the question of whether under these assumptions it would be in the interest of the nation to remove the President.”

Lamar Alexander (R-TN) said, “It was inappropriate for the president to ask a foreign leader to investigate his political opponent and to withhold United States aid to encourage that investigation. When elected officials inappropriately interfere with such investigations, it undermines the principle of equal justice under the law. But the Constitution does not give the Senate the power to remove the president from office and ban him from this year’s ballot simply for actions that are inappropriate.”

Had the framers not made removal from office automatic upon conviction — had they separated the issue of guilt from the penalty —  senators would have had the option of judging the president guilty but then voting against removal. Given the language of the Constitution, however, senators could not do so.

Considering these Republican senators’ statements, and the solid votes of all 47 Democratic senators, plus Republican senator Mitt Romney (R-UT), for conviction, one cannot deem the Senate’s judgment a “total acquittal” or an “exoneration,” which means the action of officially absolving someone from blame.  Far from a genuine acquittal, a majority of the Senate declared that what Donald Trump did was wrong.

And, of course, these factors do not even take into account the objection that, because the Senate voted 51-49 not to hear new evidence, and thus it was the first Senate impeachment trial in U.S. history without any witnesses, the trial was unfair to the prosecution.