This Isn’t The First Time Trump Has Hawked Unproven Pills 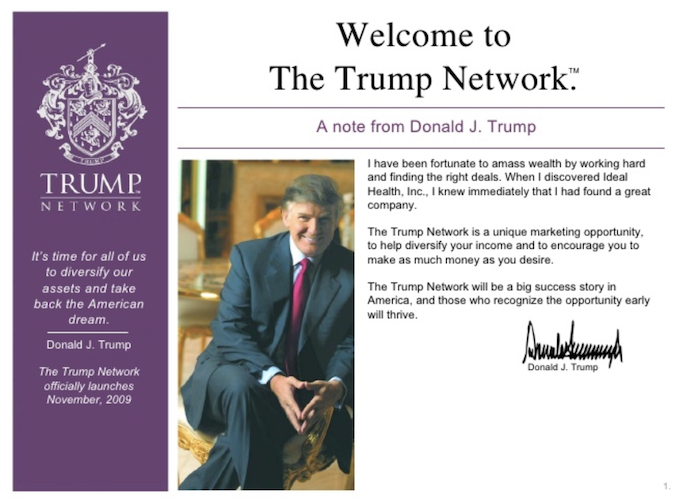 President Trump has been aggressively touting the drug hydroxychloroquine as a treatment for COVID-19, despite the lack of significant studies demonstrating its effectiveness, and despite concerns raised by medical professionals about the risks of side effects for some patients and about the need to maintain supplies of the drug for proven uses treating malaria, lupus, arthritis, and forms of cancer.

Trump’s new slogan for the drug, “What do you have to lose?” is as concerning as the evidence that has emerged that Trump owns at least a small stake in Sanofi, the French company that makes the brand-name version of the drug. It also has now been reported that Trump’s always-hustling lawyer Rudolph Giuliani has pushed hydroxychloroquine to Trump, and that Job Creators Network, a conservative dark money group founded by a major Trump donor, has been urging Trump to promote the drug to treat COVID-19 — and has received at least $500,000 from the pharmaceutical lobby. [UPDATE 04-09-20 8:15 pm: Joe Pizza.]

Some medical providers and COVID-19 patients are deciding, in the desperate circumstances they face, that hydroxychloroquine and other unproven drugs are worth the risk, and that is understandable.

But people should be wary of Trump’s drug pitch, because his yearning for a rapid escape from the crisis and a restoration of his electoral chances has clearly clouded his already-awful judgment. And also because, among all the scams he’s endorsed in his career, Donald Trump has previously pitched pills of uncertain value.

From 2009 to 2011 Trump attached his name and endorsement to a multilevel marketing (MLM) scheme to sell vitamins and other health products.  As with Amway, Herbalife, and other such operations, the Trump Network enlisted chains of individual recruits to buy products and seek to sell them in their communities.

Trump had reportedly been seeking to attach himself to one of these MLM operations, and he picked one that already been in trouble with the law. The company, called Ideal Health before Trump came along, was the subject of numerous complaints to the Federal Trade Commission from recruited salespeople who felt they had been scammed and left with useless inventory. The FTC eventually asserted in a lawsuit that the company had falsely claimed that one of its products could cure cancer.

The re-christened Trump Network launched with a glitzy event in Miami, where Trump touted the operation as a “rescue and recovery program” for people struggling in the Great Recession and suggested he would be deeply involved. “We’re all gonna be successful together…. This is going to be something that’s really amazing,” he told some 5000 people at the Miami Convention Center. “It’s going to be our company as a group.”

Trump said the Trump Network would be selling “wonderful products.”

Egged on by Trump, recruits, and product purchases by recruits, expanded dramatically, but many of the Trump Network salespeople were left dissatisfied, saying they were misled into believing Trump had a greater hands-on role in the operation, and were pushed to buy more and more product they could not unload on customers.

There were also concerns about the pills Trump was pitching. The Trump Network’s “flagship product” was a multivitamin, supposedly custom-created for each buyer based on a urine test. The product cost an initial $139.95, a $69.95 a month for the vitamins, and another $99.95 every six months for more testing.

Timothy Caulfield, a professor of public health at the University of Alberta, told the Washington Post in 2016, “There’s very little evidence to suggest that this test is going to provide you with clinically meaningful information, or that the supplements they provide are going to make you healthy.”

Experts interviewed by the Huffington Post in 2016 also cast doubt on the usefulness of the pills Trump was peddling. They said that a urine test cannot pinpoint vitamin deficiencies. Britt Hermes, a former naturopathic doctor, called the Trump vitamins “a pseudoscientific health scheme.”

Nutritionist Janet Helm told The Daily Beast that same year, “If you want a steak or a wine with Trump’s name on it, that’s fine—but if you want to play around with your health and have someone try to sell you something because they think they need to sell you pills, that’s something entirely different…. I find it troubling if [Trump didn’t] research… [and] if he didn’t have the right counsel to evaluate the products and the test, that makes me question his judgement.”

Pieter Cohen, assistant professor of medicine at the Cambridge Health Alliance in Massachusetts and an expert on supplements, said of the Trump vitamins to the Daily Beast, “There is zero evidence that is actually doing what they say it was. This is a scam, it’s a bogus program to make profit for the people who are selling it. It’s fantasy.”

In pitching hydroxychloroquine at the White House podium this week, Trump offered this additional warning, “What do I know? I’m not a doctor.” But that was just a pivot back to his huckster role, as he added, “But I have common sense.” In the past, though, Trump’s medical advice has proven questionable at best.

[UPDATE 04-08-20 8:00 pm: Soon after I posted this article, I discovered that Republican operative Tim Miller published a similar piece the day before.  I looked, as I always do, before writing, but somehow missed it. It’s worth reading.]