The Most Vile, Corrupt, Incompetent President in U.S. History 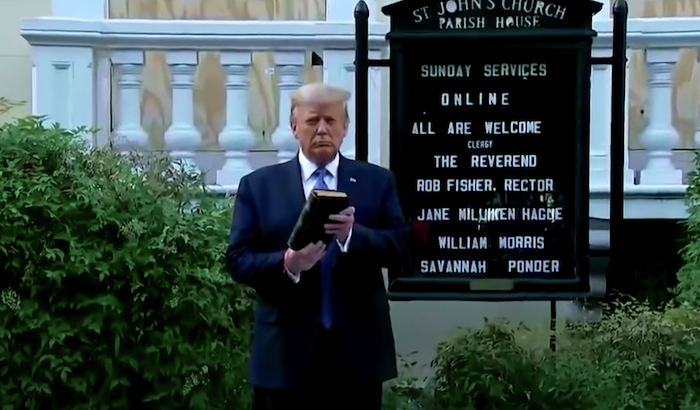 Monday morning, United States President Donald J. Trump, abruptly taking over a conference call scheduled between U.S. governors and Vice President Mike Pence, demanded that states accept the deployment of military troops in the face of nationwide protests over the killing of George Floyd by a Minneapolis police officer.

Trump demeaned the governors. “Most of you are weak,” he said. Trump shouted at the governors. “You have to dominate or you’ll look like a bunch of jerks,” he said. In case they missed his point, Trump continued, “The word is dominate. If you don’t dominate your city and state, they’re gonna walk away with you. And we’re doing it in Washington and DC; we’re gonna do something people haven’t seen before. We’re gonna have total domination.”

Monday evening, as Trump prepared to deliver remarks in the White House Rose Garden, members of the National Guard, carrying shields that read “military police” and backed by federal officers from multiple agencies, fired rubber bullets and tear gas at peaceful demonstrators assembled nearby, according to multiple media accounts. (UPDATE 06-02-20: The U.S. Park Police chief disputed these accounts in several respects.) [UPDATE 06-05-20: A Park Police spokesman admitted that it was a mistake to deny using tear gas.]

When Trump took the podium, he railed against the “angry mob,” as the smell of battle wafted over.

“If a city or state refuses to take the actions necessary to defend the life and property of their residents,” Trump threatened, “then I will deploy the United States military and quickly solve the problem for them.” Trump then seemed to announce something approaching martial law in Washington DC — thousands of military troops to be dispatched, a 7:00 pm curfew, and “law and order.”

After speaking, Trump, flanked by an armada of staff and security, marched out of the White House across Lafayette Square to St. John’s Episcopal Church, the iconic yellow-painted “Church of the Presidents,” so he could stand in front and waive a bible he’s never read.

It was unclear if the federal agents attacked peaceful protestors in order to clear a path to the church for Trump, or if Trump planned a trip to the church to create an excuse for unleashing that violence on national TV.

In front of the church was a moment of insanity. Trump’s aides — Barr, O’Brien, McEnany, Meadows, Esper — are all disgraceful for indulging that insanity, lining up to pose with their unhinged president in a tableau of all-white faces. Guess what, y’all? It hurts the country. And it’s not gonna help your careers.

Trump is a weak, flailing, incompetent, corrupt president. He’s lost control of our country, with dangerous streets, an uncontrolled pandemic, economic collapse. He threatens violence against innocent people. America has lost respect and power in the world.

Trump didn’t start COVID-19, but his vanity and selfishness has made it far more deadly.

Trump didn’t kill George Floyd, but his racism, cowardice, and lack of empathy helped turn the landscape from peaceful protest to police violence and agitator violence.

Trump is a vile disgrace. Resign.