A Racist White Supresident, Still Supported By a Majority of White Americans 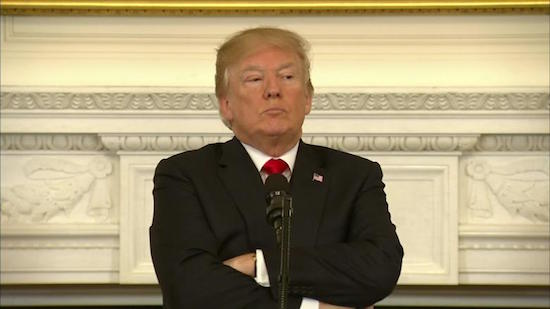 Just before election day in 2016, I came across a video on social media that showed a confrontation in a parking lot between a black man and a white man. Though neither was yielding, the white man was angry and aggressive, while the black man remained measured and calm. Before using the n-word on camera, the white man started chanting, as if his yelling won the argument. What that white man shouted stunned me.

In that moment, I woke up and understood for sure what the Trump campaign was really about.

I knew for decades from his public conduct that Donald Trump was a racist and a race-baiter, from his civil rights abuses as a landlord, to his demands for the death penalty for the falsely-accused Central Park Five, to his calls for the birth certificate and law school transcript of President Obama, to his campaign announcement focused on slurring immigrants from Mexico.

Watching the video, I knew I was dead wrong. As the campaign went forward, the ugly behavior at Trump rallies confirmed it, as did the violent attacks by Trump supporters against people of color and liberals.  Three weeks after the election, alt-right white supremacists gathered in Washington to celebrate Trump’s win. One of their leaders, Richard Spencer declared, “Hail Trump! Hail our people! Hail victory!” Video showed audience members giving the Nazi salute.

Trump’s declaration that there were “very fine people” among the white supremacist marchers at Charlottesville advanced the relationship.

Then there was the ugly blow-up over the death in Niger of U.S. Army sergeant La David Johnson, the characterization of African nations as “shithole” countries, and the reference to former staffer Omarosa Manigault Newman as a “lowlife” and a “dog” — all reinforcing that white racists had a friend in the White House.

There has been Trump’s repeated efforts to undermine the rights of voters of color.

There also has been Trump’s exhortations to law enforcement officers to treat suspects more violently.

Now, Trump’s obvious lack of empathy over the police murder of George Floyd, his equation of brave, peaceful Black Lives Matters demonstrators with terrorists, and his relentless threats of military “dominance” against them, of unleashing “vicious dogs” and “ominous weapons,” is again highlighting that, unlike any president in the modern era, Trump has no interest in democracy, or freedom of speech, or racial justice, or any justice. He’s openly just on the side of the white man.

It’s not news that Donald Trump is a white supremacist. It’s obvious. What is stunning to me is that, even now,

— after the Trump tax law gave most of its benefits to the most wealthy;

— after Trump was impeached for a blatantly corrupt effort to pressure Ukraine to intervene in our election;

— after numerous administration corruption scandals, and numerous examples of Trump personally profiting off his presidency, gave lie to Trump’s pledge to “drain the swamp” in Washington;

— after Trump’s focus on propping up the stock market and re-election led to missteps that made the coronavirus pandemic far more deadly, with more than 100,000 dead;

— after the economy plunged into a deep recession, and massive layoffs exposed that many Americans, forced to visit food pantries, have been living paycheck-to-paycheck in what Trump bragged was “the greatest economy in the history of the world”;

After all that, poll after poll shows that, although Joe Biden handily beats Donald Trump among all voters,
a majority of white voters surveyed still wants Donald Trump to be re-elected.

If you see a white person on the street, or on the road, it’s more likely than not that they support Trump.

What’s left to say? Unless you are very wealthy, the only thing Trump is delivering at this point is his white supremacy.

I get that many people in 2016 were angry at government and bureaucrats. They were afraid that the global economy had left them behind for good. They despised liberal cultural elites. All of this is likely still true.

But Trump hasn’t fixed these concerns. And he’s consistently sided with the rich, not working people.

Trump didn’t save the coal jobs. He hasn’t produced any strong lasting trade deals. Last week, Trump, who promised to help veterans, vetoed a bill, strongly supported by veterans organizations, and also by 10 Republican senators, that would have given people who were scammed by predatory for-profit colleges a chance to have their student loans erased. Trump sided with predatory corporations over hard-working people.

All of the efforts he’s bragged about in terms of international diplomacy deals, in the Middle East, North Korea, and elsewhere, have led to nothing.

If it’s culture wars that interest you, get real. Obama didn’t take your guns. And, although his religious conservative backers hope he still will accomplish it through his judicial picks, Trump hasn’t ended abortions or reversed marriage equality.  His anti-immigrant border wall is a massively expensive joke.

Trump tells obvious lie after lie, from his claim to know the Bible, to his claim to not know who drew a line around Alabama on an Oval Office hurricane map, to this week’s denial that he was rushed by the Secret Service to a bunker underneath the White House.

It can be argued that many of the remaining Trump supporters are simply trapped by family or habit or lack of education in a media and social media echo chamber of right-wing disinformation and propaganda. But almost no one is truly isolated in that way: They know another fact-based world is out there; they just choose to reject it. It doesn’t absolve anyone of responsibility for backing an obviously racist regime.

Unless you are very wealthy, or one of the Republican politicians who thrives off the campaign contributions of the very wealthy, the only thing Trump has delivered at this point is his white supremacy.

Even if you are very wealthy, or a Republican politician, is it worth it to you?

If you still support racist president Donald Trump, you are a disgrace.